Close
Byard Lancaster
from Philadelphia, PA
August 6, 1942 - August 23, 2012 (age 70)
Biography
Byard Lancaster was an internationally recognized jazz musician and avant-musical explorer. He was adept on alto, baritone, soprano, and tenor saxophones, flutes, and bass clarinet. Lancaster emerged in the great wave of free jazz players inspired by John Coltrane, but was also deeply influenced by other music and cultures. Lancaster made his mark in New York playing with Sunny Murray, Larry Young, and Bill Dixon during the 1960s. His leader debut, 1968's It's Not Up to Us, showcased a fully developed style with a hard, edgy tone that wove modal and polytonal statements around more conventional melodic sources inspired by blues, R&B, and gospel. During the '70s, Lancaster worked with Sun Ra's Arkestra and McCoy Tyner, and co-founded avant jazz-funk collective Sounds of Liberation with Khan Jamal. 1973's Live at Macalester College is widely regarded as seminal. In 1979 he released the avant-jazz-funk cult classic Funny Funky Rib Crib. During the '80s he recorded with Jamal, Ronald Shannon Jackson, and Doug Hammond, and began a decade-plus tenure with bluesman Johnny Copeland. During the '90s, he also worked extensively with Bill Laswell. Between 2000 and his death in 2012, Lancaster recorded several albums with Jamal's quartet, and on his own for CIMP, including 2005's Pam Africa.

Lancaster was born in Philadelphia's Germantown section in 1942 to Wilbert C. Lancaster, Sr. and Minerva A. Lancaster. His father was a chef and caterer who owned a restaurant. He began studying piano at age four, moved over to clarinet at eight, and to alto saxophone and flute at 10. In high school he played in the band. After graduation Lancaster attended Shaw University in Raleigh, North Carolina for a year before leaving to study music at Berklee College of Music and the Boston Conservatory, then moved to New York in the mid-'60s. Deeply influenced by the "new thing" ushered in by John Coltrane, Cecil Taylor, and Ornette Coleman, Lancaster attended and played in jam sessions with Archie Shepp and Elvin Jones.

In 1966, he made his recording debut on drummer Sunny Murray's self-titled 1966 offering for ESP-Disk and played in the Bill Dixon Orchestra for 1967's RCA outing Intents and Purposes. In 1968, in addition to playing on organist Larry Young's Heaven on Earth for Blue Note, he cut It's Not Up to Us for the Atlantic-distributed Vortex label, produced by Joel Dorn; his guitarist on the set was Sonny Sharrock. Lancaster made the first of many overseas trips in 1969, playing with Murray's group at Paris' Actuel Festival, documented on the drummer's album An Even Break (Never Give a Sucker).

In 1972, with drummer J.R. Mitchell, Lancaster released the enduring Live at Macalester College. The duo were accompanied by three bassists, a pianist, and a conguero. The acclaimed release kicked off an intense period of activity for Lancaster. That same year, he appeared on New Horizons, the lone self-titled effort by Sounds of Liberation, a band and social movement that included vibraphonist Khan Jamal and guitarist Monnette Sudler. In 1974, Lancaster and percussionist Keno Speller issued the double-length Exactement for Palm; the set featured duets as Lancaster performed on virtually all of his instruments plus electronics. That same year, along with drummer Steve McCall and electric bassist Sylvain Marc, he issued the acclaimed Us. Mother Africa, co-led by trumpeter Clint Jackson III. Lancaster also toured with the Sun Ra Arkestra and McCoy Tyner's quintet.

1979 saw the release of two of Lancaster's most important albums. Personal Testimony, initially released by the Concert Artists label, featured him performing completely solo, playing saxophones, flutes, clarinets, voices, and percussion, electronically overdubbing himself in a warm and highly experimental setting. Conversely, just a few months later, he released Funny Funky Rib Crib, an electric, avant-jazz-funk offering with a host of guitarists and drummers including Marc and McCall. The album has since become a cult classic and a perennial favorite of hip-hop producers and dance club deejays.

In 1980, Lancaster formed a duo with cellist David Eyges and issued the duo outing Arrow. He also joined Ronald Shannon Jackson's Decoding Society for their debut Eye on You and 1981's Nasty. (The group also included guitarist Vernon Reid.) He also played on Doug Hammond's Folks, the Errol Parker Experience's Graffiti, and Kip Hanrahan's debut, Coup de Tête. The following year, he continued to work with Hammond and appeared on Spaces, as well as Dwight James' Inner Heat. In 1983, after joining bluesman Johnny Copeland for Copeland Special: Make My Home Where I Hang My Hat, he cut Crossroads with Eyges and Murray.

That same year, Lancaster accepted a teaching position in Jamaica. While teaching music, he met a number of studio aces including Sly Dunbar, Aston Family Man Barrett, and Robbie Shakespeare, who introduced him to DJ, toaster, and dancehall pioneer Big Youth. In 1984 Lancaster played in the studio saxophone section on the toaster's A Luta Continua with Cedric I.M. Brooks and Dean Frazier, and alongside the aforementioned musicians. After returning to Philly that summer, Lancaster worked with Jamal's band, on the classic Infinity sessions and 1987's Storyville release, Thinking of You, but spent most of his time touring with Copeland. In 1988, he returned to Philly and played with bassist Jamaaladeen Tacuma on the long-player Jukebox. In 1989, he and Eyges issued Lightnin 'Strikes!

During the early '90s, Lancaster continued working with Copeland, but spent some time teaching music in Nigeria. There he met and spent a great deal of time talking to and jamming with Fela Kuti. Before returning home, he went to Belgium and played on the album A Lover's Question. Issued by Disques Du Crépuscule, it featured producers David Linx and Pierre Van Dormael setting James Baldwin's poems to music played by Lancaster, Steve Coleman, Slide Hampton, and Toots Thielemans, among others. In 1991, he moved to Chicago and continued to work with Copeland and played with Odean Pope's Saxophone Choir on The Ponderer. In 1992, he issued the completely obscure My Pure Joy for the tiny Black Fire label, and in 1993 issued his own Worlds on the independent Gazelle label. Lancaster's final recordings with Copeland were 1995's Jungle Swing and 1997's Texas Party.

Lancaster was introduced to bassist and prolific producer and conceptualist Bill Laswell in 1995. They hit it off and began working together on Arcana's 1997's date Arc of the Testimony, which also included Tony Williams, Graham Haynes, Buckethead, and Pharoah Sanders. Lancaster also played on Nagual Site by the studio outfit Sacred System that also included Jah Wobble, Haynes, Hamid Drake, Bernie Worrell, and many others. He also appeared on the albums Bill Laswell's Jazzonia and Moody's Mood for Love. That same year he re-teamed with List for The New York Takes. After appearing on Robert Musso's DIW outing Innermedium, Lancaster closed out the decade with Change of the Century Orchestra with Murray and Jamal.

The saxophonist kicked off the new century with a flurry of activity. Back in Philadelphia, he released The Byard Lancaster Trio with bassist Dave Gelting and drummer Jon Mueller. He also worked with Jamal on Cubano Chant and Laswell on Operation: The Redesign. In 2001, he teamed with old friends J.R. Mitchell, Pope, and Jamal for the CIMP release Philadelphia Spirit in New York. Lancaster taught and worked in Philly, and played sessions with a wide variety of local and regional musicians including the Alpha Boys and Mars 2 Earth.

In 2005 he issued the seminal career overview A Heavenly Sweetness as Byard Thunderbird Lancaster on France's Discograph label. The album offered compositions from across his career performed by his trio. That same year he issued Pam Africa with a quartet for CIMP. He also played in Jamal's quintet for Black Awareness on the label. In 2006, Lancaster returned with Thunderbird Service, a band he formed for the release of Soul Unity on France's newly established Heavenly Sweetness label, named after the previous year's album. His collaborators included Jamal and Speller, among others. He returned to CIMP to issue Ancestral Link Hotel with a quartet in 2008, and sat in with Jamal on Impressions of Coltrane for Steeplechase, his final recording.

Lancaster spent his final years playing clubs and small theaters in Philly while teaching. He was celebrated by Philly citizens for practicing in the streets and subways. In 2012, Lancaster passed away from complications due to cancer. In 2021, England's Strut re-released Lancaster's My Pure Joy, the 1992 Black Fire title that disappeared just after it was released. ~ Thom Jurek, Rovi 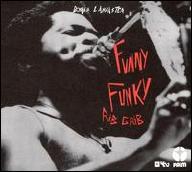 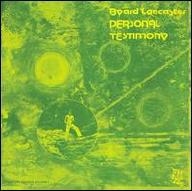 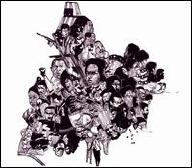 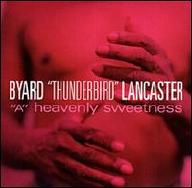 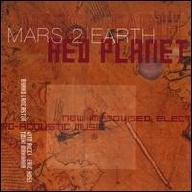 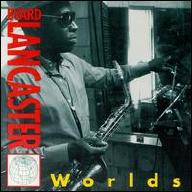 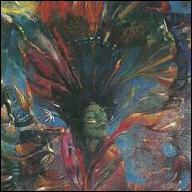 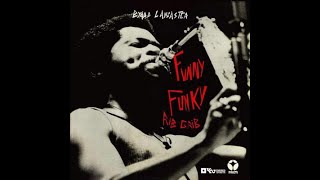 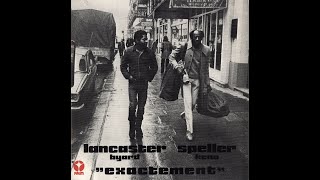 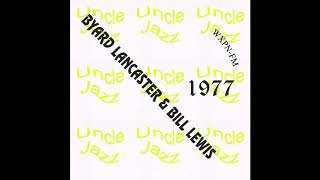 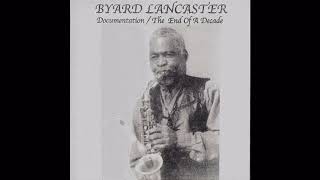 Byard Lancaster - Documentation. The End of a Decade (1979) full album 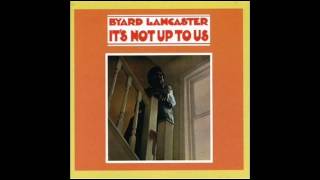 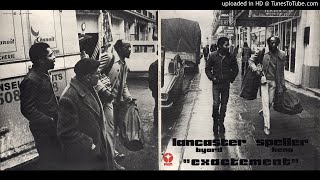 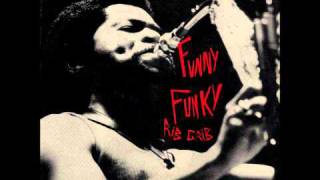