Close
Arthur Fiedler
from Boston, MA
December 17, 1894 - July 10, 1979 (age 84)
Biography
Easily the most popular conductor of his era, Arthur Fiedler was classical music's greatest ambassador since Mozart, and also one of those rare conductors whose records were not only successful, but serious profit centers, both for his orchestra and his record labels. Without regard to cultural and economic barriers, he promoted symphonic music for the enjoyment and appreciation of all listeners, programming pieces by everyone from Pachelbel to Gershwin to the Beatles and the Bee Gees. Born December 17, 1894 in Boston, Massachusetts, Fiedler was the son of a violinist in the Boston Symphony Orchestra; at the age of 15, he traveled to Berlin to study under the virtuoso Willy Hess, and while there, he also explored chamber music and conducting, in the process gaining an intimate knowledge of the Western European classical tradition. By 1915, Fiedler was back in the U.S., signing on to the Boston Symphony as a violinist; however, his own desires to conduct prompted him to form the Arthur Fiedler Sinfonietta, a tiny orchestra comprising other top BSO players.

With the Sinfonietta, Fiedler introduced his legendary Esplanade Concerts along the banks of the Charles River; the first such American performances of their kind, they combined classical and popular music to appeal to the widest audiences imaginable, and in the years to follow, became a staple of Boston culture, to this day continuing to draw hundreds of thousands of people each year. In 1930, Fiedler was appointed to the conductor's post of the Boston Pops Orchestra, the summer season incarnation of the Boston Symphony Orchestra (excluding their first-chair players). The Pops was already an established institution in Boston, but Fiedler took them further in the direction of popular music, adding show tunes and other material from beyond the concert hall to the waltzes, polkas, and other light classics already in their repertory. This wasn't always easy, as many of the players came from European backgrounds and, as he discovered, were snobbish about music (and, especially, American music). According to his daughter Johanna, he was compelled to explain that there was "no bad music, only boring music," and that was sometimes the fault of players who didn't embrace it; and that they were now playing in America, for American audiences, and would have to adapt.

He held the podium at the Pops for a half-century and turned them into one of the best-known orchestras in the United States. In contrast to most other conductors of his era, who regarded recording as a necessary if unpleasant obligation, Fiedler embraced recorded music and used it to sell music and the Pops to tens of millions who never got anywhere near Boston. One of the more enduring successes of his early career came in 1940, with the Sinfonietta's release of the first-ever recording of Johann Pachelbel's Canon in D, reintroducing to the world a piece of music that would become one of the most widely known works of the Baroque era. The Pops (like the Boston Symphony) were associated with RCA Victor and became a cash cow, not just for their parent orchestra but also for the record label; they were prevailed upon to record as much as possible, often re-doing the same pieces multiple times as technology advanced. In 1950, Fiedler's recording of Manuel Rosenthal's Offenbach pastiche Gaite Parisienne became the first long-playing record ever issued by RCA Victor, and they re-recorded the piece in stereo in 1954, long before that format was established. Their albums had sufficient mass appeal to be used as membership premiums in print advertisements for the RCA Record Club.

Fiedler the Pops made the leap to multimedia entertainment in 1970 with Evening at the Pops on the PBS network, which offered a featured guest (usually a singer or soloist) each week in tandem with the orchestra. Fiedler's avuncular persona and his sense of humor lent themselves to proceedings that, depending on the guest, ranged from the sublimely beautiful (Judy Collins) to the delightfully ridiculous (Prof. Peter Schickele, aka P.D.Q. Bach), and sometimes both at once (the Muppets). He sometimes seemed more like a ringmaster than conductor, and became a star himself in that role, profiled on national television in his seventies. By that time, the Pops -- in tandem with the Boston Symphony -- had switched labels to Deutsche Grammophon. Fiedler had always kept a finger on the pulse of popular music -- in 1964, he was putting Lennon-McCartney songs into the Pops' repertory -- and his final album, released in 1979, was entitled Saturday Night Fiedler and presented him on the cover dressed like John Travolta from #Saturday Night Fever. It might have provoked gasps from some purists, but it did sell, and it may even have gotten some disco listeners to try the Pops' brand of music. Part of the secret of his 50 years of success was that he always engaged top talent behind the scenes: the orchestra's quality was a given, but he also employed talented arrangers, most notably Leroy Anderson, himself later an established composer of light classics; the Pops' renditions of show tunes, rock songs, and even disco numbers were often entertaining, never less than interesting, and sometimes enlightening. In all, he was probably the most recorded conductor, and the Pops the most recorded orchestra of their time, with over 50 million sales of the albums.

Fiedler was a tough act to follow. At the time of his death on July 10, 1979, the Pops had become so important to the orchestra and PBS, that it was necessary to find someone who already had a following. Composer/conductor John Williams, who had soared to fame before the public with his music for the movies Jaws, Star Wars (and its sequels), and Close Encounters of the Third Kind, achieving a recognition level equivalent to that of many movie stars, became his chosen successor in 1980. ~ Bruce Eder & Jason Ankeny, Rovi 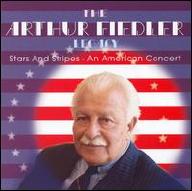 The Arthur Fiedler Legacy: Stars and Stripes [An American Concert]
2007 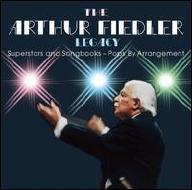 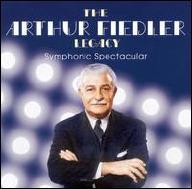 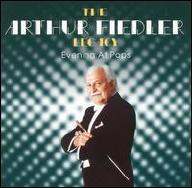 The Arthur Fiedler Legacy: Evening at the Pops
2007 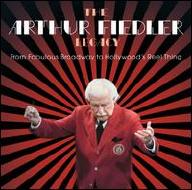 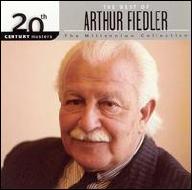 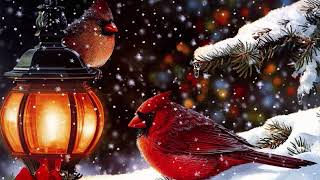 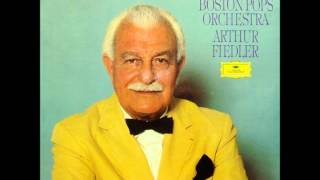 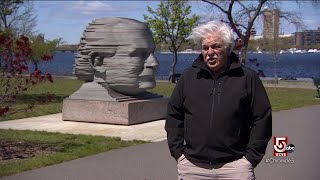 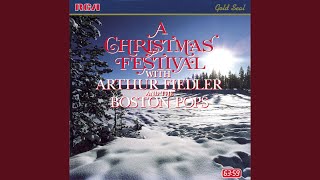 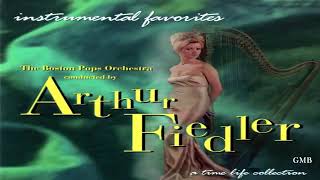