Close
Charlie Rich
from Colt, AR
December 14, 1932 - July 25, 1995 (age 62)
Biography
Charlie Rich was simultaneously one of the most critically acclaimed and most erratic country singers of post-World War II era. Rich had all the elements of being one of the great country stars of the '60s and '70s, but his popularity never matched his critical notices. What made him a critical favorite also kept him from mass success. Throughout his career, Rich willfully bended genres, fusing country, jazz, blues, gospel, rockabilly, and soul. Though he had 45 country hits in a career that spanned nearly four decades, he became best known for his lush, Billy Sherrill-produced countrypolitan records of the early '70s. Instead of embracing the stardom those records brought him, Rich shunned it, retreating into semi-retirement by the '80s.

Rich began his professional musical career while he was enlisted in the U.S. Air Force in the early '50s. While he was stationed in Oklahoma, he formed a group called the Velvetones, which played jazz and blues and featured his fiancée, Margaret Ann, on lead vocals. Rich left the military in 1956, and he began performing clubs around the Memphis area, playing both jazz and R&B he also began writing his own material. Rich managed to land a job as a session musician for Judd Records, which was owned by Judd Phillips, the brother of Sun Records founder Sam Phillips. Around this time, saxophonist and Sun recording artist Bill Justis heard Rich play at the Sharecropper Club and asked the pianist to write arrangements for him. Sam saw Rich perform with Justis at a club gig and asked him to record some demos at Sun Studios. Phillips rejected the resulting demos, claiming they were too jazzy. After absorbing some Jerry Lee Lewis records Justis gave him, Rich returned to Sun quickly and became a regular session musician for the label in 1958, playing and/or singing on records by Lewis, Johnny Cash, Justis, Warren Smith, Billy Lee Riley, Carl Mann, and Ray Smith. He was also writing songs, including "Break Up" for Lewis, "The Ways of a Woman in Love" for Cash, and "I'm Comin' Home" for Mann, which was later cut by Elvis Presley.

In August of 1958, Rich released his first single, "Whirlwind," for the Sun subsidiary Phillips International. Throughout 1959, he recorded a number of songs at Sun, though only a handful were actually released. Rich didn't have a hit until 1960, when his third Phillips International single, "Lonely Weekends," became a Top 30 pop hit. However, none of its seven follow-up singles were a success, though several of the songs would become staples in his set, including "Who Will the Next Fool Be?," "Sittin' and Thinkin'," and "Midnight Blues." In the early '60s, Rich's career remained stalled. He left Sun Records in 1964, signing with Groove, a newly established subsidiary of RCA. His first single, "Big Boss Man," was an underground, word-of-mouth hit, but its Chet Atkins-produced follow-ups all stiffed. On Groove, he jazzily interpreted standards, but he also performed a handful of originals, including "Tomorrow Night" and "I Don't See Me in Your Eyes Anymore." Groove went out of business by the beginning of 1965, leaving Rich without a record contract.

Under the direction of Shelby Singleton, Smash Records signed Rich early in 1965. Singleton and Rich's producer, Jerry Kennedy, encouraged the pianist to emphasize his country and rock & roll leanings. The first single for Smash was "Mohair Sam," an R&B-inflected novelty number written by Dallas Frazier. "Mohair Sam" became a Top 30 pop hit, but none of its follow-ups were successful. Again, Rich changed labels, moving over to Hi Records, where he recorded straight country, but none of his singles for the label made any impression on the country charts.

Despite his lack of consistent commercial success, Epic Records signed Rich in 1967, mainly on the recommendation of producer Billy Sherrill. Sherrill helped Rich refashion himself as a Nashville-based, smooth, middle-of-the-road balladeer. At first, the singles were only moderately successful -- "Set Me Free" and "Raggedy Ann" charted in the mid-40s in 1968 -- but persistence paid off in the summer of 1972, when "I Take It on Home" rocketed to number six. "I Take It on Home" set the stage for Rich's big breakthrough into the mainstream, 1973's Behind Closed Doors album. The title track from the record became a number one hit early in 1973, crossing over into the Top 20 on the pop charts. Following the success of "Behind Closed Doors," RCA re-released "Tomorrow Night," which reached the Top 30, but it was "The Most Beautiful Girl," the proper follow-up to his first number one single, that established him as a star. "The Most Beautiful Girl" spent three weeks at the top of the country charts and two weeks at the top of the pop charts. Behind Closed Doors won three awards from the Country Music Association that year: Best Male Vocalist, Album of the Year, and Single of the Year for the title track. The album was also certified gold, Rich won a Grammy for Best Country Vocal Performance, Male, and he also took home four ACM awards.

After "The Most Beautiful Girl," number one hits came quickly -- "There Won't Be Anymore" (re-released from his RCA sessions), "A Very Special Love Song," "I Don't See Me in Your Eyes Anymore" (also from RCA), "I Love My Friend," and "She Called Me Baby" (RCA) all topped the country charts, and several of the songs also crossed over into the pop charts. Mercury began re-releasing his Smash recordings, and two of them -- "A Field of Yellow Daisies" and "Something Just Came Over Me" -- became minor hits. All of this success led the CMA to name him Entertainer of the Year in 1974.

Rich didn't quite dominate the charts in 1975 as he did the previous year, but he did have three Top Five hits: "My Elusive Dreams," "Every Time You Touch Me (I Get High)," and "All Over Me," plus the Top Ten "Since I Fell For You." Even though he was at the peak of his popularity, Rich had begun to drink heavily, causing considerable problems off-stage. His destructive behavior culminated at the CMA ceremony for 1975, when he presented the award for that year's Entertainer of the Year. Instead of reading the name of the winner, he set fire to the certificate that named the new winner, who happened to be John Denver. Fans and industry insiders were outraged, and Rich had trouble having hits throughout 1976 -- none of his singles cracked the Top 20.

The slump in his career couldn't be completely attributed to Rich's behavior. His records had begun to sound increasingly similar, as he and Sherrill were working over the same territory they began exploring in 1968. There were exceptions -- such as 1976's acclaimed gospel record, Silver Linings -- but it took Rich until 1977 to break back into the Top Ten with the number one "Rollin' with the Flow." Early in 1978, he signed with United Artists and throughout that year had hits on both Epic and UA. Rich worked at United Artists with Larry Butler, a producer who had a similar style to Sherrill. Epic continued to have hits, as "Beautiful Woman" reached the Top Ten in the summer and a duet with Janie Fricke, "On My Knees," became his last number one hit that fall. "I'll Wake You Up When I Get Home," taken from the Clint Eastwood movie Every Which Way But Loose, was a number three hit early in 1979; it would be his last Top Ten single.

Rich struggled to have a big hit throughout 1979, but none of his singles were anything more than a minor success. In 1980, he switched labels to Elektra, resulting in the number 12 single "A Man Just Don't Know What a Woman Goes Through" in the fall of that year. One more Top 40 hit followed -- "Are We Dreamin' the Same Dream" early in 1981 -- but Rich decided to remove himself from the spotlight. For over a decade, Rich was silent, living in semi-retirement and only playing the occasional concert. He returned in 1992 with Pictures and Paintings, a jazzy record produced by journalist Peter Guralnick and released on Sire.

Pictures and Paintings received positive reviews and restored Rich's reputation, but it would be his last record. Rich died from a blood clot in his lung in the summer of 1995, when he was traveling to Florida with his wife, Margaret Ann. Rich's legacy lived on through a series of posthumous reissues, spearheaded by Legacy's double-disc Feel Like Going Home: The Essential Charlie Rich in 1997 and continuing well into the 21st century when compilations appeared on Bear Family, Ace, Raven, and T-Bird Americana. ~ Stephen Thomas Erlewine, Rovi 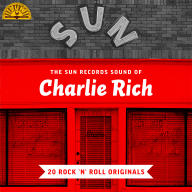 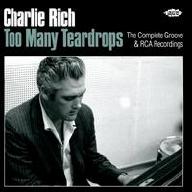 Too Many Teardrops: The Complete Groove & RCA Recordings
2017 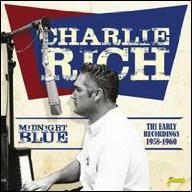 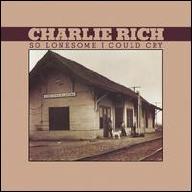 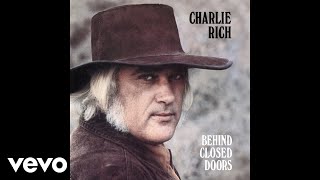 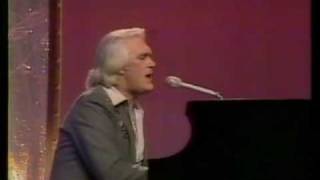 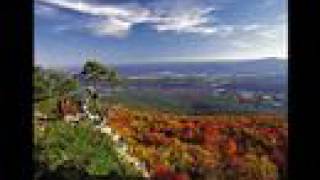 Charlie Rich - "Rollin With the Flow" 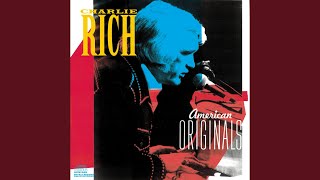 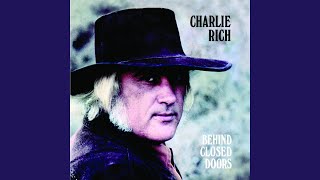 Charlie Rich The Most Beautiful Girl In The world
Available here: