Close
Byron Janis
from McKeesport, PA
March 24, 1928 (age 92)
Biography
Byron Janis was one of the most brilliant of his generation of American pianists, before his career was cut short by illness.

He was born Byron Yanks (an abbreviation of Yankelevitch) and showed extraordinary talent when he began to study piano. At the age of seven he was taken to New York, becoming a pupil of Adele Marcus, then with Joseph and Rosina Lhévinne. In 1943 he made his professional debut playing Rachmaninov's Piano Concerto no 2 with the NBC Symphony Orchestra in New York, with Frank Black conducting.

In 1944 he repeated the same concerto in Pittsburgh with thirteen-year-old Lorin Maazel, on the podium with the Pittsburgh Symphony Orchestra. Vladimir Horowitz was in the audience and subsequently invited Janis to study with him. Then Janis embarked on a successful career as a concert pianist, including a 1948 tour to South America and a 1952 tour of Europe. He married his first wife, June Dickinson; they were divorced in 1965.

In 1960 the State Department invited him to tour the Soviet Union as the first representative in a new cultural exchange program. He became the first soloist in a recording made in that city by an American record company. The result was a brilliant Mercury Living Presence LP that is an all-time classic, pairing the Rachmaninov First and Prokofiev Third Concertos. Aided by exemplary sound recording, the Prokofiev in particular is regarded by many connoisseurs as still the work's best recorded interpretation. In 1995 its CD version won the Cannes Award for Best Reissue. In 1966 he re-married, to Maria Veronica Cooper, daughter of film star Gary Cooper.

He interrupted his career in the late 1960s at the onset of an illness, temporarily resuming it in 1972. Soon, however, his concert appearances became rarer.

Meanwhile, in 1967 he had discovered two previously unknown Chopin waltzes in manuscript in Paris, and, in 1973, two variant versions of them, also in Chopin's hand, at the Yale Library. This led to a 1978 French television documentary, #Frédéric Chopin: A Voyage with Byron Janis, in which he discussed and played illustrations concerning the problems of determining the authentic versions of Chopin's music.

In 1985 he was invited to perform at the White House. On that occasion he publicly disclosed the nature of the illness that had hampered him for nearly twenty years: psoriatic arthritis affecting his wrists and hands. The ailment had not prevented him from continuing to play piano well, but it often made it impossible to play to his former high standard.

In the meantime he devoted much of his energy to teaching, composing, and humanitarian concerns. He became Ambassador of the Arts for the Arthritis Foundation, and often plays in fund-raising concerts for it. He is Chairman of the Global Forum Arts and Culture Committee.

He composed the musical theme for the Global Forum on Human Survival in Oxford, England, held April, 1988. With lyrics by Sammy Kahn, it became a song, The One World. Janis's music is primarily in the Pop style, and includes a musical version of #The Hunchback of Notre Dame. In 1989 he composed the score for Turner Network Television's 1989 major documentary on Gary Cooper. He is on the faculty of Manhattan School of Music, and works on the Board and Music Advisory Committee for Pro Musicus, an international organization devoted to helping young artists. ~ Joseph Stevenson, Rovi 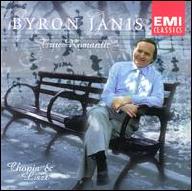 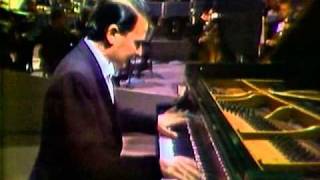 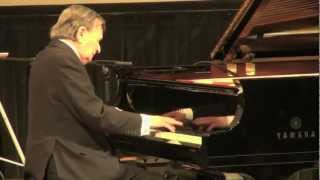 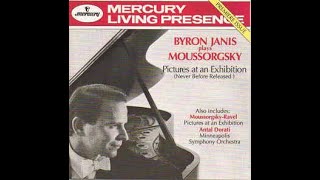 PICTURES AT AN EXHIBITION BYRON JANIS 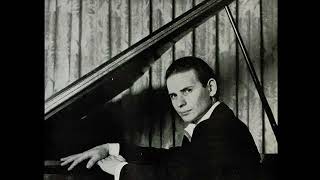 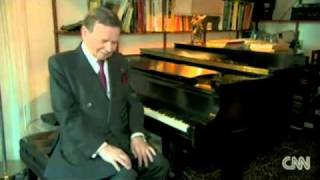 Byron Janis and his struggle with arthritis! 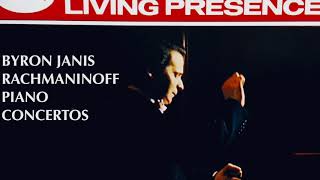 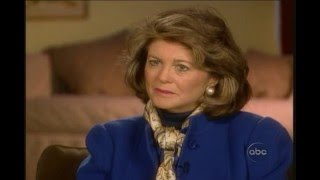