Close
Soundgarden
from Seattle, WA
formed September 1, 1984 (age 36)
Biography
Soundgarden carved out a place for heavy metal in alternative rock. They were not the first band to draw upon the heavy, sludgy sounds of the '70s; the group picked up a thread left hanging by fellow Seattle rockers Green River, grunge pioneers who favored the scuzzy rock of the Stooges, and they shared Jane's Addiction's love of grandiose heavy rock. Nevertheless, Soundgarden popularized metal within alternative rock, even obliterated the line separating the two subcultures. Melding the slow grind of Black Sabbath and cinematic scope of Led Zeppelin with the D.I.Y. aesthetics of punk, Soundgarden played with an intelligence and ironic sense of humor that was indebted to the American underground of the mid-'80s. Their music contained a similar sense of adventure, often taking detours into psychedelia, unconventional guitar tunings, and complicated time signatures. Vocalist Chris Cornell and guitarist Kim Thayil were excellent foils, with Cornell's powerful wail pushing against Thayil's winding riffs, a chemistry that gave the band a distinctive character that belonged neither to the mainstream nor the underground. This chemistry was evident from the band's start, when Soundgarden was one of the first groups to release a recording on Seattle's pioneering Sub Pop label. Those early records built a considerable buzz, suggesting Soundgarden would be the band that broke down the commercial doors for alternative rock. That didn't turn out to be the case. They were eclipsed by the meteoric success of Nirvana, a fellow Sub Pop alumni whose Nevermind became a blockbuster while Soundgarden was working on Badmotorfinger in the fall of 1991. As it turns out, Soundgarden received a boost from grunge exploding in the mainstream. Superunknown, their 1994 album, became an international smash, with its hit single "Black Hole Sun" becoming a standard of its era. The group didn't weather success well, disbanding after 1996's Down on the Upside, but their catalog endured, leading the band to reunite in 2010. Over the next few years, the group toured regularly, releasing a new album called King Animal in 2012, before Cornell died tragically in 2017.

For a band so heavily identified with the Seattle scene, it's ironic that two of its founding members were from the Midwest. Kim Thayil (guitar), Hiro Yamamoto (bass), and Bruce Pavitt were all friends in Illinois who decided to head to Olympia, Washington, to attend college after high school graduation in 1981. Though none of them completed college, all of them became involved in the Washington underground music scene. Pavitt was the only one who didn't play -- he founded a fanzine that later became the Sub Pop record label. Yamamoto played in several cover bands before forming a band in 1984 with his roommate Chris Cornell (vocals), a Seattle native who had previously played drums in several bands. Thayil soon joined the duo and the group named itself Soundgarden after a local Seattle sculpture. Scott Sundquist was originally the band's drummer, but he was replaced by Matt Cameron in 1986. Over the next two years, Soundgarden gradually built up a devoted cult following through their club performances.

Pavitt signed Soundgarden to his fledgling Sub Pop label in the summer of 1987, releasing the single "Hunted Down" before the EP Screaming Life appeared later in the year. Screaming Life and the group's second EP, 1988's FOPP, became underground hits and earned the attention of several major labels. The band decided to sign to SST instead of a major, releasing Ultramega OK by the end of 1988. Ultramega OK received strong reviews among alternative and metal publications, and the group decided to make the leap to a major for its next album, 1989's Louder Than Love. Released on AM Records, Louder Than Love became a word-of-mouth hit, earning positive reviews from mainstream publications, peaking at 108 on the charts, and earning a Grammy nomination. Following the album's fall 1989 release, Yamamoto left the band to return to school. Jason Everman, a former guitarist for Nirvana, briefly played with the band before Ben Shepherd joined in early 1990.

Soundgarden's third album, 1991's Badmotorfinger, was heavily anticipated by many industry observers as a potential breakout hit. Though it was a significant hit, reaching number 39 on the album charts, its success was overshadowed by the surprise success of Nirvana's Nevermind, which was released the same month as Badmotorfinger. Prior to Nevermind, Soundgarden had been marketed by AM as a metal band, and the group had agreed to support Guns N' Roses on the fall 1991 Lose Your Illusion tour. While the tour did help sales, Soundgarden benefited primarily from the grunge explosion, whose media attention helped turn the band into stars. The band was also helped by the Top Ten success of Temple of the Dog, a tribute to deceased Mother Love Bone singer Andrew Wood that Cornell and Cameron recorded with members of Pearl Jam.

By the spring release of 1994's Superunknown, Soundgarden's following had grown considerably, which meant that the album debuted at number one upon its release. (A year before its release, Shepherd and Cameron released an eponymous album by their side project, Hater.) Superunknown became one of the most popular records of 1994, generating a genuine crossover hit with "Black Hole Sun," selling over three million copies and earning two Grammys. Soundgarden returned in 1996 with Down on the Upside, which entered the charts at number two. Despite the record's strong initial sales, it failed to generate a big hit, and was hurt by grunge's fading popularity. Soundgarden retained a sizable audience -- the album did go platinum, and they were co-headliners on the sixth Lollapalooza -- but they didn't replicate the blockbuster success of Superunknown. After completing an American tour following Lollapalooza that was plagued by rumors of internal fighting, Soundgarden announced that they were breaking up on April 9, 1997, to pursue other interests.

During the late '90s and 2000s, each member kept very busy. Cornell released three solo albums, also recording and touring as Audioslave with former members of Rage Against the Machine. Cameron toured his Wellwater Conspiracy project, and also played and recorded with Smashing Pumpkins and Pearl Jam. Thayil collaborated with a wide range of artists, including Cameron, Dave Grohl, Steve Fisk, and Boris. Meanwhile, Shepherd helped out with Wellwater Conspiracy, and also played and recorded with Mark Lanegan of Screaming Trees. Finally, in 2010, the band announced a reunion with a few live shows during the summer (including that year's edition of Lollapalooza) which preceded a compilation, Telephantasm, in the fall. Telephantasm was initially available as a double-disc set on September 28, with a single-disc version appearing a week later (the single-disc was also included in Guitar Hero on September 28). In 2011, Soundgarden released their first live album, Live on I-5, which featured material recorded during the band's supporting tour for Down on the Upside. All of this activity would be the prelude to Soundgarden's full-on return in 2012, when they released their sixth album, King Animal, in the fall of that year.

King Animal debuted at five on the Billboard Top 200 upon its November 2012 release and the band supported it throughout the next year with a tour. Matt Cameron took a hiatus from the band in November 2013 due to commitments with Pearl Jam; former Pearl Jam drummer Matt Chamberlain replaced him for live dates in 2014. That year, Soundgarden celebrated the 25th anniversary of Superunknown with the release of two deluxe editions of the 1991 album: a double-disc set and a seven-disc Super Deluxe box set. During 2015, Chris Cornell mentioned that Soundgarden had started working on material for a new studio set and the band made it official in 2016, announcing that they were beginning to record an album. In the meantime, the band released a deluxe reissue of Ultramega OK in March 2017 and began an American tour that April. On May 17, following the band's concert at Detroit's Fox Theater, Cornell was found dead in his hotel room; he had taken his own life at the age of 52.

In the wake of Cornell's death, the surviving members of Soundgarden took time to regroup. In an October 2018 interview, Thayil suggested that the remaining trio would retire the Soundgarden name but perhaps work together in some capacity. The three did perform at a Chris Cornell tribute concert in January 2019, a show where vocals were handled by several singers, including Brandi Carlile, Taylor Momsen, and Taylor Hawkins. In July 2019, the band released their first posthumous record, the double album Live from the Artists Den, which captured a concert from 2013. ~ Stephen Thomas Erlewine, Rovi 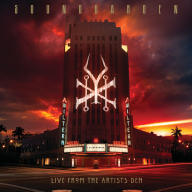 Live From The Artists Den
2019 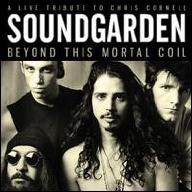 Beyond This Mortal Coil: A Live Tribute to Chris Cornell
2017 Beyond The Wheel [Live] 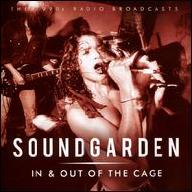 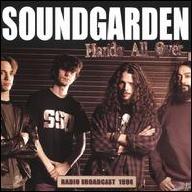 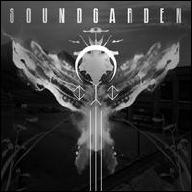 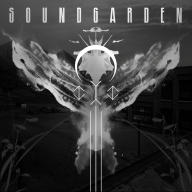 Echo Of Miles: Scattered Tracks Across The Path
2014
Videos
Close 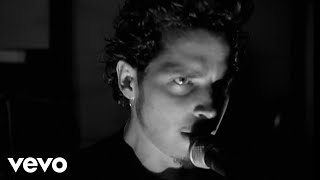 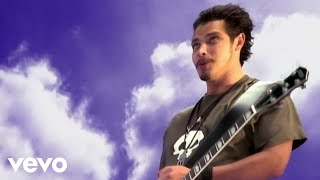 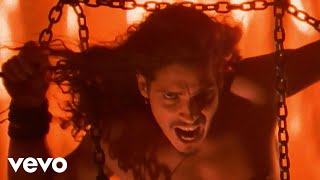 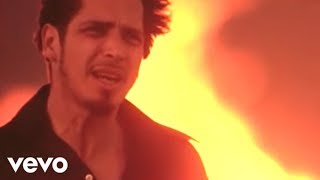 Soundgarden - Burden In My Hand 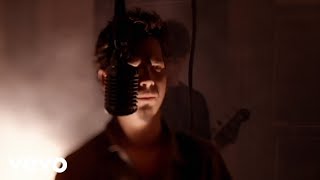 Soundgarden - The Day I Tried To Live (Official Music Video) 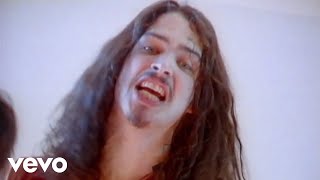 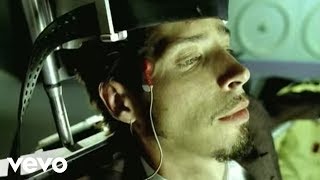 Soundgarden - Blow Up The Outside World
Available here: