Close
The Creation
from Enfield, London, England
formed January 1, 1966 (age 55)
Biography
They could've been contenders -- hell, they should've been contenders! That's the first thought that passes through one's head as one hears the early singles by the Creation -- and, indeed, how they weren't contenders is astonishing. They had it all: the in-house songwriting, the production, the voices, and the sound that should've put them right up there with the Who and ahead of the Move and Jimmy Page, among others. Their lead guitarist, Eddie Phillips, was even asked by Pete Townshend to join the Who as their second guitarist. But thanks to an unaccountable weakness in their British sales -- as opposed to their German chart action, which was downright robust -- and some instability in their lineup, they were never to enjoy any of the recognition they deserved, and a right turn from psychedelia into soul at the wrong moment took whatever wind they had out of their sails (and sales). And the final few months of their history, filled out by the work of a revived band that never quite got it together in the studio, and singles derived from early outtakes, did nothing but confuse fans and admirers, who couldn't be sure "which" Creation they were dealing with on record.

The band's history began in 1963 with a group called the Blue Jacks in Cheshunt, Hertfordshire, to the north of London. The band had just gotten a new lead singer, Kenny Pickett (who'd previously driven the van for Neil Christian the Crusaders), and with the addition of a new lead guitarist, Eddie Phillips, they changed their name to the Mark Four. The latter band got signed to Mercury Records' British division in 1964 but the resulting two singles failed to sell. Even as British audiences were finding their work quite resistible, however, German audiences were greeting their performances at the Big Ben Club in Wilhelmshaven with rousing enthusiasm. It was during their extended residence in Germany that the band chanced to cross paths with a local band called the Roadrunners, who had attracted amazing local club attendance with their use of guitar feedback in their songs. Eddie Phillips made note of the effect and started working out how he might assimilate it into his playing.

The Mark Four got a second crack at recording success with Decca Records, which resulted in a single of "Hurt Me (If You Will)" b/w "I'm Leaving." It also failed to sell, but it did establish the beginning of a new sound; on that record, Phillips introduced his own approach to guitar feedback. It was all a little too wild for Decca, which stuck the song on the B-side, but it was a beginning of sorts. It also coincided with an ending, as the band's rhythm guitarist, Mick Thompson, and their bassist, John Dalton -- soon to join the Kinks, replacing Peter Quaife -- quit. The Mark Four finished their history with a temporary lineup and one last single in early 1966. During the weeks that followed, Pickett and Phillips, along with drummer Jack Jones, held the group together and began rethinking their precise image and direction -- for a brief time, future superstar bassist Herbie Flowers even sat in with them. By the spring of that year, the group had evolved into the Creation, with ex-Merseybeats bassist Bob Garner filling out the lineup, and they had also signed with an ambitious young Australian-born manager -- then closely associated with Brian Epstein -- named Robert Stigwood.

The Creation burst on the British pop/rock scene that June with "Making Time," a single that seemed to have everything going for it -- a killer beat after a brief (but catchy) stop-and-go intro, a great chorus, and a flashy, slashy, crunchy lead guitar part by Eddie Phillips that intersected very neatly with and expanded upon the kind of sound that the Who were carrying high onto the charts at the time. The parallel was no accident, as that single was produced by Shel Talmy, who'd also worked on all of those early Who sides. In an eerie and inexplicable portent of their future, however, "Making Time" soared to number five in Germany but peaked at an anemic number 49 in England, this at a time when they were getting amazing press for their stage performances, which included paintings being lit afire and, in anticipation of what Jimmy Page would one day be doing with the Yardbirds, among others, Phillips began playing his electric guitar with a violin bow.

The group finally saw some slightly significant chart action at home in the fall of 1966 with "Painter Man," a cheerfully trippy pop anthem -- with a feedback-oozing guitar break -- that made the Top 40; predictably, the same record hit number one in Germany. The B-side, "Biff Bang Pow," opened with a "My Generation" guitar riff and jumped into a pop/rock idiom with a psychedelic edge that could have earned it airplay on its own.

By the start of 1967, however, the Creation had hit a crisis point, as Kenny Pickett quit over creative differences and frustration at the need to continue touring in Europe, where their audience was seemingly rooted. He was eventually replaced by Kim Gardner, late of the group the Birds. Their sound at that point was still intact -- Phillips was still there on guitar, which was a huge part of what they were about musically and sonically. At this point, with whatever momentum they'd built up in jeopardy, the group took a totally unexpected turn into blue-eyed soul with "If I Stay Too Long," which was a good enough showcase for Gardner (supported by some reverb-soaked backing vocals and an organ) but offered little from Phillips except some emphatically played chords; it was as though the Who, having established themselves on the charts and the radio with "My Generation" and "Anyway Anyhow Anywhere," had suddenly issued their version of "Please, Please, Please" as a 45 rpm -- it confused people who knew the Creation, and was mostly ignored by established fans. Much more like their established sound were "Can I Join Your Band," which somehow only got issued in France, and the U.K. single's B-side, "Nightmares."

They were still struggling for a commercial foothold in England, despite being one of the most widely touted live acts of the time, when the group's German label decided it was time to release a Creation LP. We Are Paintermen ended up being better than anyone could have anticipated, highlighted by the previous hit plus a surprisingly good, crunchy, at times almost Byrds-like rendition of "Like a Rolling Stone," and a version of "Hey Joe" that had the temerity to take Jimi Hendrix's slow tempo and treat its jagged guitar line even more harshly. There was also a rousing rendition of "Cool Jerk" for anyone who cared, though a lot else of what was there was either off-point or represented the earlier lineup. One more single, "Life Is Just Beginning" b/w "Through My Eyes," showed up in the fall of 1967 -- the A-side was a rousing psychedelic showcase, with elements of Indian raga and a catchy, chant-like main body, plus jagged guitar and a string orchestra with the cellos sawing away in the best "King Midas in Reverse" manner. "Through My Eyes" was no throwaway, either, with a lean, crunchy guitar, beautiful choruses, and a great central tune, with three-minutes-and-change of spacy sensibilities ending in a feedback crescendo.

Evidently, Eddie Phillips felt that the single was as good a showcase as he would ever get, and in October of 1967 he quit. His departure was followed by Kim Gardner's decision to exit the group for a team-up with Ron Wood, Jon Lord, and Twink in what became known as Santa Barbara Machinehead. The Creation was kept "alive" into the spring of 1968 when their U.K. label, Polydor, released a single of "How Does It Feel" b/w "Tom Tom" on both sides of the Atlantic, with the U.S. version tarted up with all sorts of dubbed-on psychedelic effects. They were both good sides but never charted, and that might've been the end of the group, but for the sudden re-emergence of Kenny Pickett, who got Gardner and Jones back together to form the core of a new Creation. That band went through a couple of lineup changes, played around Europe for a bit with Ron Wood as a member, and then dissolved, and somewhere in the midst of all of those lineup changes a new album was started and abandoned (and forgotten for 36 years). Oddly enough, the "new" group at its best didn't sound bad, or all that much different from the classic lineup, although they lacked Phillips' knack for brushing up right against the edge of chaos with his guitar breaks.

That might've been the end, once and for all, of the group's history, but for four excellent (and very early) sides, probably demos by the Pickett/Phillips lineup, with Herbie Flowers sitting in on bass -- including a fine soul side, "Mercy, Mercy, Mercy," and a killer rendition of "Bonie Maronie," kitted out in a manner not that different from "Hey Joe" or "Biff Bam Boom" -- that turned up in Germany in 1968. This time, however, the group was really gone, the members going their separate ways -- Phillips into soul singer P.P. Arnold's band, among other activities; Gardner became part of Ashton, Gardner Dyke ("Resurrection Shuffle") and Tony Kaye's group Badger; Dalton and Thompson tried reuniting under the name Passtime, and Kenny Pickett, after enjoying some success as a songwriter and performing in a variety of contexts, returned to being a roadie, this time for Led Zeppelin and other bands; and he eventually re-formed the Creation in the first half of the '90s.

His reactivation of the Creation was a response to a long series of events belatedly recognizing the band. In the early '80s, Eva Records of France released an LP that combined the singles by the Mark Four and some of the key sides of the Creation, while England's Edsel Records released How Does It Feel to Feel?, the definitive LP collection of the Creation. The group gained a reputation as one of the great lost missing links of '60s rock, sort of England's answer to Moby Grape in terms of massive talent unaccountably caught in a dead-end. The latter-day group enjoyed three years of success before Pickett's death from a heart attack in 1996 ended their history. Since then, Demon Records in England has issued a slightly fuller, better mastered compilation (Our Music Is Red -- With Purple Flashes), and Retroactive Records released two CDs of their work, complete with outtakes, alternate mixes, and television performances, all amazing for a band that couldn't get a proper LP recorded in their own time. In 2017, the Numero Group released Action Painting, a double-album that included new stereo mixes of most of their records, and Edsel made a bid to top that with a four-CD set called Creation Theory, which gathered up later-period recordings in addition to their classic sides. ~ Bruce Eder & Richie Unterberger, Rovi 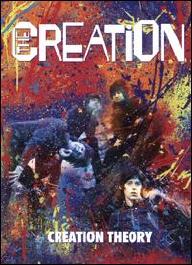 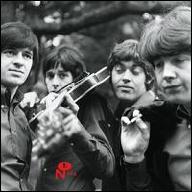 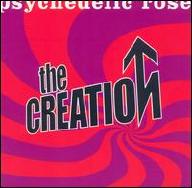 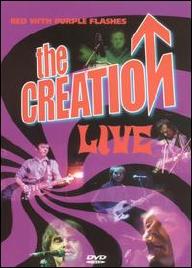 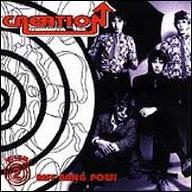 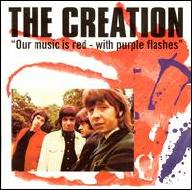 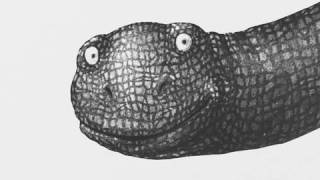 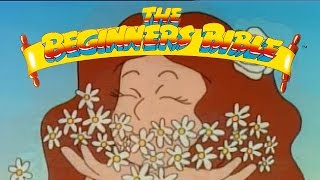 The Creation - The Beginner's Bible 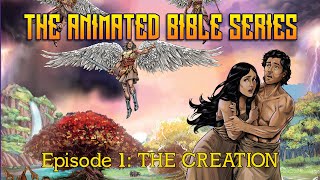 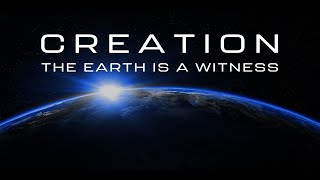 Creation: The Earth is a Witness | Full Movie 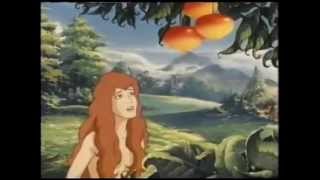 Stories from the Bible - The Creation 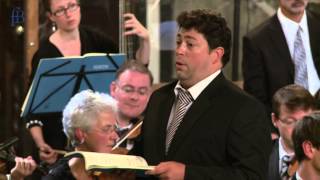 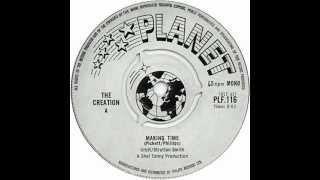