Close
Keith Tippett
from Bristol, England
August 25, 1947 - June 14, 2020 (age 72)
Biography
British pianist, composer, and bandleader Keith Tippett's career spanned jazz-rock, progressive rock, improvised and contemporary music, as well as modern jazz for more than half-a-century. From solo performances through numerous duos, trios, quartets, quintets, sextets, and septets to the 21-piece orchestra the Ark and the 50-musician-strong Centipede, Tippett held an unparalleled place in British contemporary music. He played the piano on records by King Crimson, Peter Sinfield, Elton Dean, and various offshoots from the Canterbury orbit. His own recordings, including 1970's You Are Here...I Am There, initially found only a tiny audience, but he established his name with his work as a sideman. Other early dates, such as Centipede's Septober Energy and the Keith Tippett Group's Dedicated to You, But You Weren't Listening, utilized progressive rock (members of Soft Machine, King Crimson, and Nucleus were in both bands) to open a dialogue with avant-jazz. 1973's self-titled Ovary Lodge was Tippett's first completely improvised piano outing, produced by Robert Fripp. 1978's Frames (Music for an Imaginary Film) by Keith Tippett's Ark was a free jazz/big band fusion. Further improvised solo recordings, such as 1982's live Mujician (and the its two sequels in 1987 and 1989) are considered seminal contributions to the free jazz canon and have influenced dozens of musicians. In 1985, Tippett scored the British comedic thriller The Supergrass, and two duo outings with vocalist/wife Julie Tippett, Couple in Spirit I and II from 1988 and 1987, set a new bar for vocal/instrumental improvisation. Tippett also shape-shifted Mujician into an all-star quartet with Dunmall on sax and flute, Tony Levin on drums, and bassist Paul Rogers; they released seven albums between 1990 and 2006 including Birdman and Spacetime. In 2016, the pianist released The Nine Dances of Patrick O'Gonogon (recorded at Real World Studios with his octet) and the acclaimed Mujician Solo IV (Live in Piacenza) on Dark Companion.

Keith Tippett came from a very musical family, and showed a strong aptitude and interest in piano and organ as a child. He also played cornet and tenor horn with Bristol Youth Band. Even in his teens, Tippett's main interest lay outside the booming British beat sound, in jazz, both of the "trad" (i.e. Dixieland) variety and bop. He came to London in 1967 at age 20 and found it an unforgiving place for an aspiring jazz musician amid the boom in psychedelia, ska, bluebeat, and R&B. Unable to find any paying gigs, he survived with a job folding cardboard boxes and lived in a garret. Deprived of access to a piano, he cut notches into the edge of a table to help him practice.

Tippett did eventually become known around the jazz clubs in London, where he crossed paths with other like-minded musicians, among them the members of Chris MacGregor's expatriate South African ensemble the Blue Notes, including drummer Louis Moholo, trumpet man Mongezi Feza, and saxophonist Dudu Pukwana, with whom he would collaborate in the future. A scholarship that he secured to the Barry Summer School Jazz Course in Wales introduced Tippett to cornet and trumpet player Marc Charig, saxman Elton Dean, and trombonist Nick Evans.

He formed his own sextet in late 1967 with Dean, Charig, and Evans, and a rhythm section that, at various times, featured bassists Jeff Clyne, Roy Babbington, Harry Miller, and Neville Whitehead, and drummers Phil Howard, John Marshall, Bryan Spring, and Alan Jackson. The band earned a residency at Oxford Street's 100 Club, which gave them a lot of visibility and got them a contract with the fledgling Vertigo label, which resulted in the release of two albums, You Are Here...I Am There (1970) and Dedicated to You, But You Weren't Listening (1971).

Those albums remain obscurities, but Tippett and members of his group were much more visible in 1970 and 1971 in their role in the studio with Robert Fripp's King Crimson. Tippett alone was originally tapped by Fripp to play the piano in the studio band that he assembled in the early and mid-'70s to complete In the Wake of Poseidon, after the original King Crimson band broke up. By that time, Tippett's group -- which included Dean, Charig, Evans, Jeff Clyne (bass), Alan Jackson (drums), and Giorgio Gomelsky sitting in on bells -- had finished You Are Here...I Am There.

Tippett, Charig, and Evans all played very prominent roles on King Crimson's Lizard (1970), and Fripp invited Tippett to join his band, but he declined, preferring to keep his own group. Even as a "guest" musician, Tippett was extremely prominent on Lizard, his acoustic piano standing in sharp contrast to the Mellotrons and other electronic instruments on their records; Fripp's Mellotron swelled in the background, replacing a string section, while Tippett's resonant chords and elegant note patterns delighted audiences with the effect and the contrast. He and Charig turned up on Islands (1971), by which time the Tippett band had completed Dedicated to You with Robert Wyatt, Bryan Spring, Phil Howard, and Gary Boyle.

That album concluded the band's contract with Vertigo, and Tippett jumped to British RCA the same year. His major project for 1971, apart from Crimson's Islands album and the second Vertigo album of his own, was the Centipede Orchestra. This 50-piece outfit, assembled late in 1970 and including Roy Babbington (bass), Ian Carr (trumpet), Elton Dean (saxophone, cello), Alan Skidmore (sax), Karl Jenkins (oboe), John Marshall (drums), vocalists Zoot Money (ex-Animals), Mike Patto, Julie Tippett (the former Julie Driscoll), and Robert Wyatt (drums), was put together to perform Tippett's composition "Septober Energy," an extended large-scale work. After a few live performances, a recording was arranged with British RCA, and Septober Energy was issued in 1971.

The album was bought by listeners familiar with both King Crimson and the Soft Machine (several of whose members participated), but it came to be regarded as a gargantuan disaster, failing to attract either favorable reviews or sales of any significance. (It was reissued in 1974 in America and England, and failed to sell again, despite a serious advertising campaign by RCA, at least in New York, where the company took out co-op newspaper advertising with Korvettes and Sam Goody's, based on Robert Fripp's presence as producer.) Tippett stayed with RCA for one album, Blue Print, recorded in 1972 with a band made up of Babbington, drummer Frank Perry, and Julie Tippetts. An ex-member of Brian Auger's Trinity, her soaring soprano voice added vital new elements to the sound of Tippett's music. They also formed the core of Ovary Lodge, a group that also recorded an album (produced by Fripp) for RCA, and a second record for the Ogun label. During the mid-'70s, the Tippetts were also involved with Giorgio Gomelsky's short-lived progressive rock label Utopia, where they recorded the Sunset Glow album.

As a result of his decision to keep his work rooted in jazz, Tippett's career hardly slowed with the end of the art rock boom in the late '70s. He simply wasn't a part of it; with his emphasis on acoustic piano and jazz improvisation, he wasn't flashy enough to be embraced by the arena-sized audiences that Emerson, Lake Palmer or Yes were pulling in, but he was a fine enough musician to impress the more thoughtful members of those audiences. Tippett's bands since the early '70s centered on pure improvisation, playing avant-garde jazz and free-form rock. Tippett and his wife also played with other groups, and he recorded duets (as T'nT) with pianist Stan Tracey, and composed another piece for large orchestra, "Frames: Music for an Imaginary Film" (1978), which was recorded by a 22-piece ensemble that he organized and called Ark. He played in bands with Trevor Watts, Elton Dean, Dudu Pukwana, Louis Moholo, and Howard Riley. His album appearances, in addition to those on his wife's and King Crimson's discs, include records by Elton Dean, Arthur Brown, Dennis Gonzalez, Dudu Pukwana, and Hugh Hopper.

During the late '80s, Tippett formed a new band of his own called Mujician, featuring Paul Dunmall on reeds, Paul Rogers on double bass, and Tony Levin on drums, which specialized in pure improvisation. The Tippetts also recorded as part of a trio with Willi Kellers, and Keith wrote film and television scores, as well as pieces for contemporary concerts of serious music, including works for string quartet and piano. When he wasn't performing, Tippett was also a teacher, most notably at the Darlington International Summer School. The Tippetts continued to record and tour England and the European continent with various bands and orchestras, and in the late '80s, their work began appearing on the EG label.

Continuing the restless streak that had been his benchmark, Tippett shifted labels as much as he did recording partners throughout the '90s and into the 21st century. Notable albums and collaborations included 66 Shades of Lipstick with Andy Sheppard on EG and Mujician III (August Air) on FMP in 1990; the Bern Concert duet album with regular collaborator, pianist Howard Riley in 1994; the solo concert Une Croix Dans L'océan on Victo in 1995; Bladik on Cuneiform with Elton Dean, Tony Levin, Paul Dunmall, Paul Rogers, and Roswell Rudd in 1997; Linückea, backed by strings in 2000 on FMR; The Dartington Trio with his wife and Dunmall in 2003 and the Dartington Improvising Trio: Live at the Priory in 2005, also on FMR; and the limited-edition Mahogany Rain on DUNS in 2007, with Dunmall, Tippett, and Philip Gibbs. In 2008, Tippett played one of the two pianos and conducted the 20-piece big band called Canto Generale on the stellar live effort Viva la Black Live at Ruvo, which also featured Julie Tippett and drummer Louis Moholo. That same year, he also oversaw the remaster and release of Supernova, a first-time issue by Resteamed of the tapes from his 1977 duet jam session with Stan Tracey.

In 2010, Tippett formed a new octet with collaborators old and new, including his wife, Dunmall, James Gardiner-Bateman, Peter Fairclough, Kevin Figes, Thad Kelly, and Ben Waghorn. The band recorded his album-length suite From Granite to Wind early in 2011. In 2013, just prior to suffering a heart attack and a long period of recuperation, Tippett issued the solo Two for Joyce: Live in Trieste for Klopotec. 2019 saw the release of A Mid Autumn Night's Dream, from a 2016 performance by the Tippetts, Italian multi-instrumentalist and electronicist Paolo Tofani, and percussionist Lino Capra Vaccina. Keith Tippett died on June 14, 2020, at the age of 72; he succumbed to a heart attack after two years of recurring illness. ~ Bruce Eder, Rovi 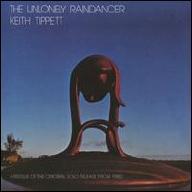 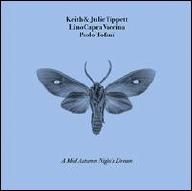 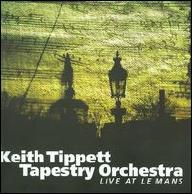 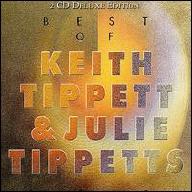 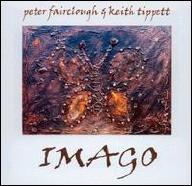 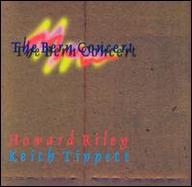 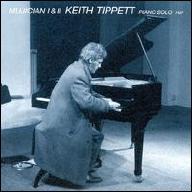 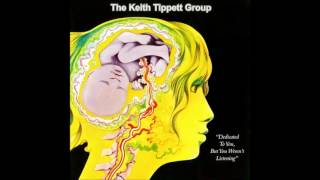 The Keith Tippett Group ‎– Dedicated to You, But You Weren't Listening 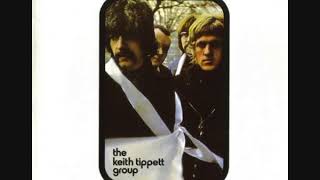 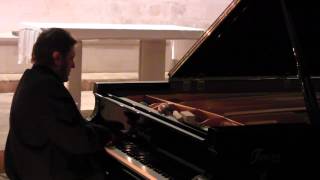 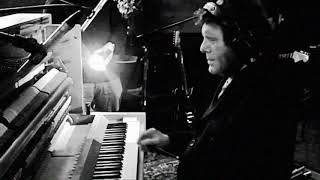 Keith Tippett - Noise In Your Eye 'Touch The Water' 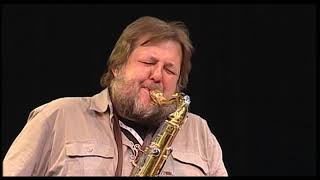 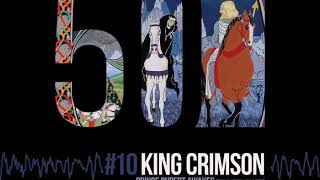 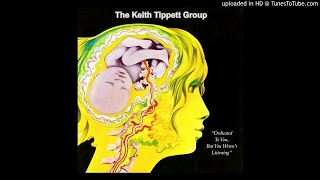