Close
Randy Brecker
from Philadelphia, PA
November 27, 1945 (age 75)
Biography
Blessed with a bold tone and hard bop-informed improvisational chops, trumpeter Randy Brecker is both a jazz titan and a journeyman with a decades-long career marked by having led one of the most successful crossover fusion outfits, the Brecker Brothers, alongside his brother, saxophonist Michael Brecker. After emerging in the late '60s as a member of both Horace Silver and Art Blakey's groups, Brecker quickly established himself as an in-demand session player, often working with his brother and appearing on countless recordings across various genres, including albums by James Brown, Todd Rundgren, Lou Reed, Aerosmith, George Benson, and many more. There were even more jazz dates, including sessions with Hal Galper, Larry Coryell, Billy Cobham, and others. With the launch of the funk-influenced Brecker Brothers in the mid-'70s, he rose to the top echelon of crossover stars of the era, scoring a hit with "Some Skunk Funk" off 1975's The Brecker Bros. and picking up numerous Grammy nominations over the course of the group's initial six-year run. Although closely linked to fusion, many of his own albums -- like 1968's Score and 1987's In the Idiom -- have showcased his dedication to the driving post-bop jazz tradition. Still, genre fluidity remains one of Brecker's major hallmarks, and albums like 2003's electronic-tinged 34th N Lex, 2008's Grammy-winning Randy in Brasil, and 2013's The Brecker Brothers Band Reunion have showcased this spirit.

Born in 1945 in Philadelphia, Pennsylvania, Brecker grew up in a musical family alongside his younger brother, saxophonist Michael. Initially, he was introduced to jazz by his father, a lawyer and semi-professional jazz pianist, who took Randy and Michael to several formative concerts, including shows by Miles Davis, Duke Ellington, and Thelonious Monk. By his teens, he was already a gifted improviser, and spent many of his summers honing his skills playing in stage-band camps. He also gigged locally, working with R&B and funk bands. All the while, he was listening to jazz, studying albums by Lee Morgan, Sonny Rollins, Clifford Brown, Art Blakey, and Horace Silver. After high school, he earned his undergraduate music degree from Indiana University, studying with such esteemed educators as Bill Adam, David Baker, and Jerry Coker. From there, he moved to New York City and quickly found work with various big bands, including Clark Terry's big band, the Thad Jones/Mel Lewis Jazz Orchestra, and the Duke Pearson Big Band, making his recorded debut with the latter, appearing on 1967's Introducing Duke Pearson's Big Band.

Also in 1967, Brecker signed on with the pioneering R&B outfit Blood, Sweat Tears, but quickly parted ways with the band to join pianist Horace Silver's quintet. In 1968 he released his debut album as leader, Score, featuring his brother on saxophone, pianist Hal Galper, guitarist Larry Coryell, bassist Eddie Gomez, and drummer Mickey Roker. A year later, he appeared again with Silver on You Gotta Take a Little Love. There were also early recordings with Moby Grape, the Jazz Composer's Orchestra, Gary McFarland, and others. Parting ways with Silver, he joined Art Blakey's Jazz Messengers.

In 1970, he co-founded the landmark fusion band Dreams along with his brother, Barry Rogers, Billy Cobham, and John Abercrombie. Over the next two years, the band toured and issued two highly influential albums with 1970's Dreams and 1972's Imagine My Surprise. He then appeared with guitarist Coryell's expansive fusion outfit Eleventh House. The Brecker brothers, who were increasingly in demand, then rejoined Silver, appearing on 1972's In Pursuit of the 27th Man. They also recorded several post-bop albums with pianist Hal Galper, including The Guerilla Band and Wild Bird. There were also a wide variety of credits, including James Taylor's One Man Dog, Todd Rundgren's Something/Anything?, Grover Washington, Jr.'s Soul Box, and many more.

In the mid-'70s, Randy and Michael formed their own fusion project, the Brecker Brothers, balancing a mix of pop and jazz forms with sophisticated improvisation and a genre-bending love of funk, post-bop, and rock. They debuted with 1975's The Brecker Bros., which featured the classic track "Some Skunk Funk." Over the next six years, the band deftly balanced commercial and artistic appeal, garnering seven Grammy nominations and issuing a number of albums for Arista, including 1976's Back to Back, 1977's Don't Stop the Music, and 1978's Heavy Metal Be-Bop, the latter of which included the U.K. hit single "East River." Along the way, they shared the stage with an evolving lineup of bandmates, including David Sanborn, Mike Stern, Will Lee, Steve Khan, Hiram Bullock, Marcus Miller, and many others. Following 1981's Straphangin', the Brecker Brothers went on indefinite hiatus.

With the Brecker Brothers set aside, Randy continued his extensive session work, appearing on albums from across the musical spectrum, including works by Jaco Pastorius, Charles Mingus, Donald Fagen, Spyro Gyra, Phoebe Snow, George Benson, and Frank Sinatra, just to name a few. He returned to his solo work with the 1987 straight-ahead album In the Idiom, playing alongside saxophonist Joe Henderson, pianist David Kikoski, bassist Ron Carter, and drummer Al Foster. The equally burning acoustic date Live at Sweet Basil appeared the following year, and featured the trumpeter in concert with saxophonist Bob Berg, pianist David Kikoski, bassist Dieter Ilg, and drummer Joey Baron. Both albums showcased Brecker's continued dedication to composing and playing challenging post-bop jazz. Also during the '80s, he often worked with his then wife, Brazilian-born pianist/vocalist Eliane Elias (the couple divorced in the early '90s), collaborating on 1986's Amanda and 1988's So Far So Close.

In 1990, Brecker returned to a more electric setting with the contemporary-leaning Toe to Toe, which found him reuniting with brother Michael. Two years later, the brothers made the reunion official with The Return of the Brecker Brothers on GRP. Released exactly ten years after the group's last album, the album was a major success, picking up three Grammy nominations. The band's follow-up, 1994's Out of the Loop, featured a guest appearance by trumpeter Chris Botti, and fared even better, taking home two Grammy Awards for Best Contemporary Jazz Performance and Best Instrumental Composition. The trumpeter then picked up his first ever Grammy as a solo artist for his 1997 Brazilian-influenced album, Into the Sun. He then sidestepped his usual output, introducing his alter ego "Randroid" on the electronic-accented Hanging in the City.

The 2000s proved to be a fruitful period for Brecker as he picked up his second solo Grammy Award for Best Contemporary Jazz Album for 2003's 34th N Lex, which featured appearances by brother Michael along with David Sanborn, baritone saxophonist Ronnie Cuber, and trombonist Fred Wesley. There were also well-received tours with his quintet, the Bill Evans Randy Brecker Soulbop Band, and a 2003 headlining appearance by the Brecker Brothers at Japan's Mt. Fuji Jazz Festival. Also that year, the Breckers joined the WDR Big Band for Some Skunk Funk, which took home the Grammy for Best Large Jazz Ensemble after its release. Sadly, it was during this period that Michael Brecker was diagnosed with myelodysplastic syndrome (MDS), a cancer of the blood marrow. Despite an exhaustive search for a bone marrow donor, the saxophonist passed away on January 13, 2007.

In the wake of his brother's death, Randy returned to his love of Brazilian music, issuing 2008's Randy in Brasil. Recorded in São Paulo and produced by Ruriá Duprat, and featuring a cadre of Brazilian musicians including Robertinho Silva, Paulo Calazans, Edú Ribeiro, and others, it won the Grammy for Best Contemporary Jazz Album. During the search for a bone marrow donor for Michael, Polish pianist/composer Wlodek Pawlik discovered that the brothers (whose mother's maiden name is Tecosky) had ancestry in the Tykocin area of Poland. This led to a 2009 collaboration between Randy and Pawlik, Tykocin Jazz Suite, which also featured the Bialystok Philharmonic. Two years later, he picked up four more Grammy nominations with The Jazz Ballad Song Book, which found him backed by the Danish Radio Big Band and the Danish National Chamber Orchestra.

In 2011, the trumpeter reconvened a new version of the Brecker Brothers for a tour, and in 2013 issued The Brecker Brothers Band Reunion. Featured were several legacy members including guitarist Mike Stern, drummer Dave Weckl, and keyboardist George Whitty, as well as new members including Italian saxophonist (and Brecker's wife) Ada Rovatti and keyboardist Oli Rockberger. Also in 2013, he paired again with Pawlik for Plays Wlodek Pawlik's Night in Calisia. Randypop!, a live album with pianist Kenny Werner, his daughter vocalist Amanda Brecker, bassist John Patitucci, and others, arrived in 2015. There also were sessions with Mike Stern, Eliane Elias, Eric Clapton, Mingus Dynasty, and more. In 2018, he joined Mats Holmquist and the UMO Jazz Orchestra for Together. In 2020, Brecker brought home his seventh Grammy Award, this time for best improvised jazz solo due to his stellar performance on the track "Sozinho" from 2019's Rocks. ~ Matt Collar, Rovi 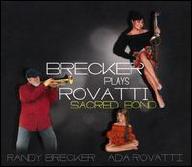 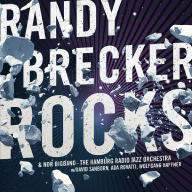 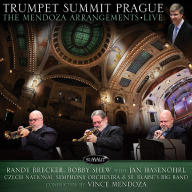 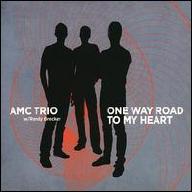 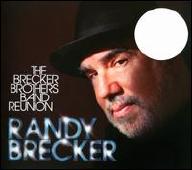 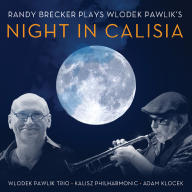 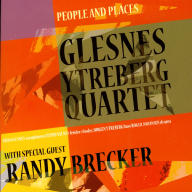 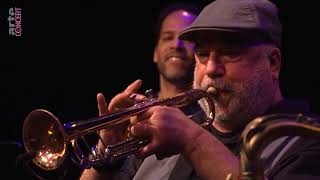 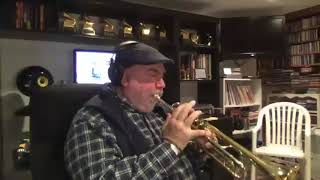 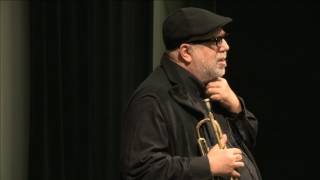 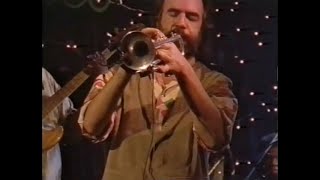 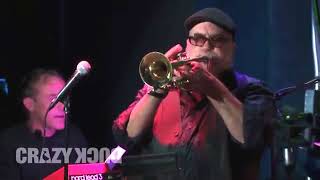 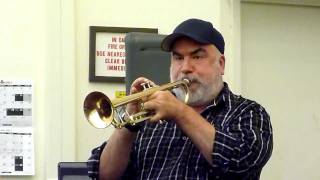