Close
Blind Lemon Jefferson
from Couchman, TX
September 24, 1893 - December 19, 1929 (age 36)
Biography
Country blues guitarist and vocalist Blind Lemon Jefferson is indisputably one of the main figures in country blues. He was of the highest in many regards, being one of the founders of Texas blues (along with Texas Alexander), one of the most influential country bluesmen of all time, one of the most popular bluesmen of the 1920s, and the first truly commercially successful male blues performer. Up until Jefferson's achievements, the only real successful blues recordings were by women performers, including Bessie Smith and Ida Cox, who usually sang songs written by others and accompanied by a band. With Jefferson came a blues artist who was solo, self-accompanied, and performing a great deal of original material in addition to the more familiar repertoire of folk standards and shouts. These originals include his most well-known songs: Matchbox Blues, See That My Grave Is Kept Clean, and Black Snake Moan. In all, Blind Lemon Jefferson recorded almost 100 songs in just a few years, making his mark on not only the bluesmen of the time (including Leadbelly and Lightnin' Hopkins) but also on music fans in the years to come. The legacy of Jefferson's unique and powerful sound did not fade with the passing decades.

Many specifics on the life of Blind Lemon Jefferson are not available, but general information on the man and his career can be traced somewhat through recordings, a few public records, and the memories of those who knew him. Although his birth has long been placed in July of 1897, research almost a century later uncovered a census record that listed his birth in September of 1893. Despite the uncertainty surrounding his birth date, a few things are certain: Jefferson was born on a farm in Couchman, TX, outside of Wortham, and, blind from the time of birth, he grew up as one of seven children. Around 1912, he began playing guitar and singing at picnics and parties in his home area. His musical influences included not only the singing of the cotton pickers and local guitar players but also the guitarists among the area's Mexican workers who often incorporated flamenco patterns in their playing. These influences eventually led to Jefferson's unique style of complex phrases and intricate, yet fast, finger work. Within a couple of years, Jefferson widened his performing radius to include Groesbeck, Buffalo, Waco, and other surrounding towns. Sometime around 1915, Jefferson also began playing in Dallas and, by 1917, was a resident of the city. He was most often found playing in the Deep Ellum area of Dallas where he eventually met another bluesman who would one day be famous, Leadbelly. Although Leadbelly was the senior bluesman of the two, it is generally recognized that Jefferson was the better guitarist. Leadbelly was so impressed with Blind Lemon Jefferson, in fact, that he would later record songs in tribute to Jefferson's ability, including the song, Blind Lemon's Blues. The two men even played together for a short while, sometime before Leadbelly's first prison sentence.

From the late teens into the early '20s, Blind Lemon Jefferson traveled and performed his passionate brand of blues, hitting (at the very least) the Mississippi Delta and Memphis regions, although it is likely that his travels took him further. In 1922 or 1923 he married a woman named Roberta with whom he would have children, including a boy in the mid-'20s. It was in 1925 that a Texas talent scout finally made a demo recording of Jefferson and sent it to Mayo Williams at Paramount Records in Chicago. Jefferson was soon (circa 12/25 and 1/26) brought to Chicago to record for the first time. The results were two gospel songs: I Want to Be Like Jesus in My Heart and All I Want Is That Pure Religion, both of which were released under the pseudonym Deacon L.J. Bates. Two months later, Jefferson began recording blues 78s under his own name, but that initial session wasn't the last time Jefferson recorded under a pseudonym. In 1927, He Arose From the Dead and Where Shall I Be? were released under the names Deacon L.J. Bates and Elder J.C. Brown for the Paramount and Herwin labels, respectively. Jefferson recorded over 90 songs total in less than four years' time. Almost all of his recordings were for the Paramount label, with the exception of his two-day session for Okeh, which took place in Atlanta in March of 1927. This session resulted in the second version of That Black Snake Moan, (11/26) this time entitled Black Snake Moan, as well as the first recording of another song that became one of Jefferson's most famous originals, Matchbox Blues, which he recorded again for Paramount just one month later. Jefferson's records did well immediately, making him one of the best-selling race recording artists of the time. This is surprising considering his decidedly noncommercial sound; his high, eerie voice (often described as having a "lonesome" sound), the desperate (and sometimes suggestive) nature of his lyrics, and his often-complex guitar work all combined into a particularly raw and hard-hitting blues.

In addition to his frequent recording sessions in Chicago throughout the late '20s, Blind Lemon Jefferson still performed in Texas and traveled around the South. He played Chicago rent parties, performed at St. Louis' Booker T. Washington Theater, and even worked some with Son House collaborator Rev. Rubin Lacy while in Mississippi. In late September of 1929, Jefferson went to Paramount's studios in Richmond, IN, for a fruitful session that included two songs -- Bed Springs Blues and Yo Yo Blues -- that were also issued on the Broadway label. Jefferson was back in Chicago in December of 1929 when, sadly, he was found dead following a particularly cold snowstorm. There are several stories regarding his death: It has been said that he got lost in the storm after leaving a friend's party at a late hour, or that he was abandoned by his chauffeur, or was killed in a car accident, while yet another version claims Jefferson had a heart attack and froze in the snow. Regardless, the influential bluesman was still in his thirties when he died, and no death certificate was issued, so the date of his passing is only known to be toward the end of December. Pianist and labelmate Will Ezell escorted Jefferson's body back to Wortham, TX, where Blind Lemon Jefferson was laid to rest, purportedly on New Year's Day, 1930. Unfortunately for the author of the pleading See That My Grave Is Kept Clean, the grave itself went unmarked. This was finally remedied in 1967 when a metal Texas Historical Marker was placed on the approximate spot. By the 1990s, however, Jefferson's grave was discovered to be in disrepair. A fundraiser was organized and, thanks to the efforts and donations of blues fans around the world, a granite headstone was finally placed upon Jefferson's grave, inscribed with his lyric, "Lord, it's one kind favor I'll ask of you. See that my grave is kept clean." It was also discovered during the preparation of the headstone that there is no support for the date widely believed to be that of Jefferson's birth -- July 1897 (which even appeared on the original grave marker) -- while the census documents in the State Archives listed Lemon Jefferson's birth to be in September of 1893. Thus, the new date was put on the gravestone.

Blind Lemon Jefferson was to Texas blues what Charley Patton was to Mississippi blues. His performances had a direct influence upon such legendary Texas musicians as Lightnin' Hopkins, T-Bone Walker, and Leadbelly, while his recordings helped bring his influence to an even larger audience. In the decades since, Jefferson's songs have been covered by countless musicians including Bob Dylan, John Hammond, Jr., and Kelly Joe Phelps, to name just a few. The late '50s and early '60s brought the reissue of some of Jefferson's recordings on the Riverside and Milestone labels, sparking a renewal of widespread public interest in the bluesman. As a result, Blind Lemon Jefferson Clubs were opened in California and New York during the '60s, and the rock band Jefferson Airplane reputedly chose their name after the great bluesman. A good single album compiling selections of Jefferson's music remains the Yazoo label's appropriately titled King of the Country Blues, which was eventually remastered for CD release. For completists, the Document label has since issued his entire recorded works in a four-volume CD series. In 1980, Blind Lemon Jefferson was inducted into the Blues Foundation's Hall of Fame. ~ Joslyn Layne, Rovi 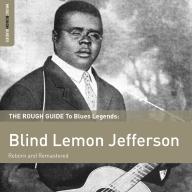 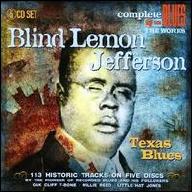 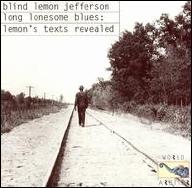 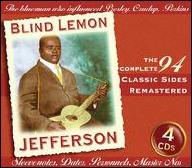 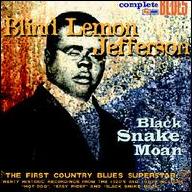 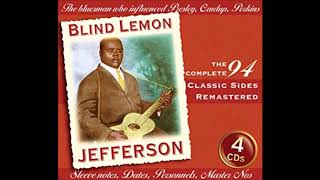 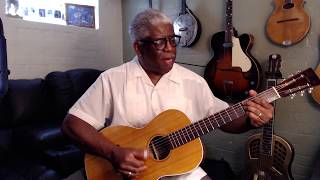 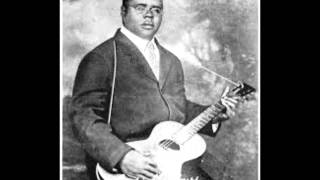 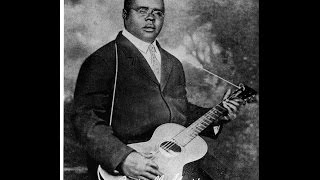 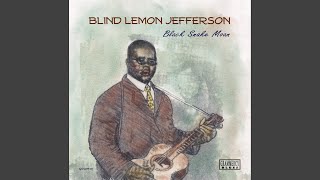