Close
Smith Ballew
from Palestine, TX
January 21, 1902 - May 2, 1984 (age 82)
Biography
One of the best as well as one of the only real "cowboy jazz" singers, Smith Ballew is sometimes said to be the fellow who started the Glenn Miller band, only to have it hijacked away from him. The native Texan was much more interested in art than music all the way until his university days. Hanging out in the evenings at the University of Texas, he and his brother Charles Robert Ballew became part of the cultish society known as jazz fans. Smith Ballew decided to learn guitar and banjo, and while he did study music formally at the college, an important part of his musical upbringing seems to be the informal knowledge he picked up hanging out with black musicians on the outskirts of town. The brothers became good enough players to join Jimmy's Joys, a combo led by Jimmy Maloney. The band can be said to have gotten the career of either Ballew off to a good start, as by 1923 the group already had the opportunity to head to California and record for the illustrious-sounding Golden record label.

Golden turned out to be at the very least silver, the records selling quite well. These sides, however, do not feature Smith Ballew's vocal talents -- at this point, he was still just an instrumentalist, sticking mostly to the banjo or "five-banger." He started up his own band, the Texajazzers, which in the solid tradition of territory bands gigged in its home state and those in immediate vicinity. In 1927, Smith Ballew dissolved the band and began collaborating with pianist Dick Voynow in the Wolverine Orchestra, attracting the attention of bandleader and talent hunter Ben Pollack at a Chicago show. Pollack came up with a job offer, and it was in this band that Ballew began singing as balancing a banjo on his knee.

In the late '20s he headed to New York City with bandleader Ted Fio Rito, but wound up busking just to survive. Of course, the New York streets can be a darn good place to make new contacts, and he did. Tommy and Jimmy Dorsey heard him on the street and introduced him to violinist Joe Venuti; a ball began rolling for Ballew's talent that made a healthy Texas tumbleweed patch look like a golf ball. He began working with Fred Rich's band at the Astor Hotel, as well as with Meyer Davis in the recording studio and radio. After cutting the musical question Was It a Dream? in a concert arrangement with the brothers Dorsey, the Okeh label offered the vocalist a contract. The resulting band that was assembled, including a contingent of Texas music buddies, combined Southern and urban rhythms in the manner of western swing. Ballew continued working with New York's cream-of-the-crop players, including trumpeter Red Nichols, Venuti, guitarist Eddie Lang, trumpeter Bix Beiderbecke, and saxophonist Frankie Trumbauer.

At one point, if biographical legend can be believed, Ballew had accomplished the goal of every New York musician: total domination. He was said to have been recording for every label in town, and working with every bandleader of any renown whatsoever. Ballew was one of many performers from this period who were wiped out by the Depression, losing much moolah in investment debacles and the stock market crashes of the late '20s and early '30s. The owner of one venue where the singer worked regularly suffered similar losses and committed suicide, erasing a slew of dates off the calender. The Ballew Orchestra persevered, still packed with talent such as Venuti, Lang, and brothers George and Bobby Van Eps. A 1932 version of the group was assembled by ex-Pollack band sidekick Glenn Miller, and featured Bunny Berigan on trumpet and the friendly Chummy MacGregor on piano.

As the decade wound on, Ballew began to lose control of his orchestra, Miller and other new associates such as Ray Noble rising from the pit to take power like the musicians in Federico Fellini's controversial film #Orchestra Rehearsal. By the early spring of 1935, his ouster was complete, and his final session for Columbia released under the name of Glenn Miller His Orchestra. Ballew fled to Los Angeles, where Victor Young, then the musical director of both the Decca label and NBC radio, arranged a role for him in a Hollywood radio show. Ballew was also offered a chance to act in a series of B westerns for 20th Century Fox, and he warmed to the idea of becoming a singing cowboy. His acting career then dominated his career, his last role being his most serious, in John Huston's powerful 1951 adaptation of #The Red Badge of Courage. After this he embarked on a non-performing career in public relations, retiring in 1967. He appears on quite a few classic recordings as a featured guest, while Australia seems to be the focal point of in a revival of interest in the Ballew orchestra's Okeh, Columbia, and Crown material, as well as music from his cowboy movies, adding up to a total of six different releases on two different down-under labels. ~ Eugene Chadbourne, Rovi 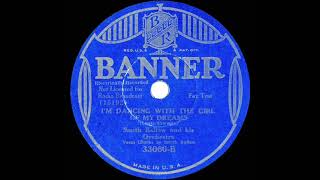 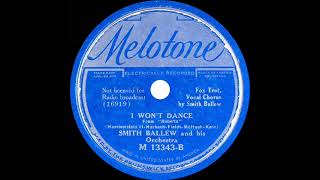 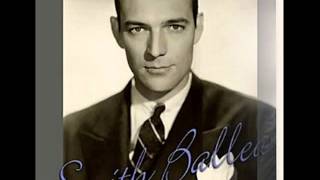 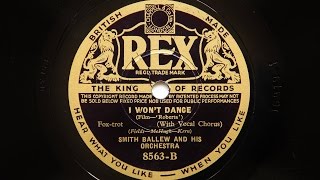 Smith Ballew and His Orchestra - I Won't Dance 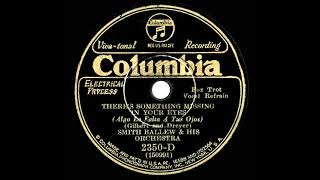 1930 Smith Ballew - There's Something Missing In Your Eyes 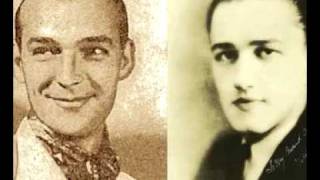 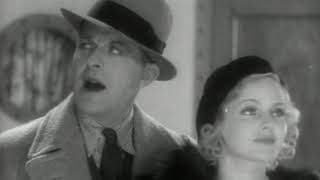 Smith Ballew - I Wouldn't Change You for the World (1931)
Available here: