Close
James Jamerson
from Charleston, SC
January 29, 1936 - August 2, 1983 (age 47)
Biography
Legendary Motown bassist James Jamerson single-handedly revolutionized bass playing. Throughout the entire classic Motown catalog (and some non-Motown sides), Jamerson shaped a new inventive style of bass playing and brought what had been regarded by some as a "minor" instrument to the forefront through the use of the electric Fender bass, powered by his musical genius and amazing dexterity. Jamerson wasn't Motown's first bassist, but he was certainly the first to incorporate a fresh perspective and intuitiveness along with his own jazz/blues-oriented background to Motown founder Berry Gordy's R&B/pop leanings. The innovative bassist moved R&B/pop bass playing from the standard two-beat root fifth (dum-de de de-dum dum) to an approach that was more dynamic: using zipping passing tones, Ray Brown-like walking bass lines, double stops, and syncopation. Jamerson's playing was nothing short of revolutionary.

Other than the loving tribute -Standing in the Shadows of Motown: The Life and Music of Legendary Bassist James Jamerson, a classic book/CD set by Allan Dr. Licks Slutsky (publisher Hal Leonard), not much has been written about the bass-playing wonder.

James Lee Jamerson, Jr. was born on January 29, 1936, in Charleston, NC, to the union of James Lee Jamerson, Sr. and his wife Elisabeth. His father worked in shipyards and his mother was a domestic worker. When his parents divorced, Jamerson divided his time between his grandmother who played piano, an aunt who sang in the church choir, and practicing piano at his cousin's house. He began developing his innate musical talents while incessantly listening to gospel, jazz, and blues stations.

After a bicycle accident, he spent a year in a wheelchair. Forced to wear high-topped shoes in order to walk, the incident left Jamerson with a slight limp and a gnawing self-consciousness that would haunt him for his entire life. In 1953, Jamerson's mother moved to Detroit to find work. A year later, she sent for her son. At Northwestern High, Jamerson picked up an upright bass that was lying on the floor in the music room and "found" his instrument. Never a solitary play-the-scales-millions-of-times type of musician, the budding young bassist honed his skills at jam sessions, in the high school jazz band, and by playing with some of Detroit's top jazz musicians like Kenny Burrell, Yusef Lateef, and Hank Jones. As his reputation grew, Jamerson began playing at dances, weddings, and frat parties with schoolmates Richard 'Popcorn' Wylie (piano) and Clifford Mack (drums). Years later, Jamerson played on a hit record of a song written by Wylie, With This Ring by the Platters (Musicor, number 12 R&B, spring 1967).

Jamerson was becoming a neighborhood hero, driving around Detroit with his upright bass sticking out of his car window. Still a minor, the Detroit police department gave him a permit to play in clubs that served liquor, enabling him to get more work. Just before graduation, he married Annie Wells and turned down a music scholarship from Wayne State University, reasoning that he was already working in the music field.

After graduation, he began playing with Washboard Willie and the Supersuds of Rhythm. The experience was both a blessing and a curse. By playing with the blues-based band, Jamerson learned how to play the blues, while on his other gigs he played all kinds of jazz. But he also began drinking alcohol, something he had abstained from up to that point.

In 1958, Johnnie Mae Matthews, owner of Northern Records heard Jamerson at a Supersuds club gig and asked him to play on sessions for the label. His unique style came to the attention of other Detroit-area labels, and the 22-year-old Jamerson began cutting sides for Fortune, Tri-Phi, Anna Records, and others. Some musicians invited Jamerson to a session at a small basement studio in a converted house at 2648 West Grand Boulevard, which eventually became the recording base of Motown Records.

The enigmatic bassist found his musical soulmates in pianist Earl Van Dyke, drummer Benny Benjamin, guitarists Robert White, Joe Messina, and the rest of the Funk Brothers (as the Motown studio band came to be known). In 1961, Jamerson switched to the newly created electric Fender Precision bass. The move made his bass lines stand out more on records. On some tracks he started out recording the bass line with his trusty acoustic and then doubled the bass line with the Fender to give the bass part an extra punch. He playing was so precise that it was difficult to hear that there were two basses on the record. When the bassist wasn't touring with Jackie Wilson or recording for Motown or touring with their acts, Jamerson would travel to nearby Chicago to cut sides for VeeJay or Brunswick. He can be heard on John Lee Hooker's Boom Boom (number 16 R&B, summer 1962). The musician became so crucial to Motown's hits that recording dates would be postponed until he was available.

Though Motown wasn't too keen about Jamerson and the rest of the Funk Brothers recording for other labels, the Detroit music community and several music entrepreneurs, local and otherwise, took advantage of the situation, offering the band more money, leading to the Funk Brothers being heard on a lot of "backdoor sessions." For the local Golden World and Ric-Tic label owned by Twenty Grand Club owner Ed Wingate, the band can be heard on Agent Double-O Soul (number eight R&B, 1965) and Stop Her on Sight (number nine R&B, 1966) by Edwin Starr, and I Just Wanna Testify by the Parliaments (number three R&B, 1967). For Ollie McLaughlin's Karen label, there was Cool Jerk by the Capitols (Top Ten R&B, number seven pop, July 1966). The band can also be heard on records issued by the numerous labels that sprang up in the wake of Motown's phenomenal success.

Making the trips to nearby Chicago, they cut several hits for producer Carl Davis and Jackie Wilson. Whispers (Gettin Louder), recorded on August 8, 1966, and released September 1966, went to number five R&B and number 11 pop in the fall of 1966. (Your Love Keeps Lifting Me) Higher and Higher set the stage for Wilson's mid-'60s comeback and was his second number one R&B single (pop number six) on October 7, 1967. Other hits included Since You Showed Me How to Be Happy (number 22 R&B, November 1967), I Get the Sweetest Feeling (number 12 R&B, June 1968), and (I Can Feel Those Vibrations) This Love Is Real (number nine R&B, November 1970). The success of these records, both commercially and aesthetically, suggest that if Wilson had been signed to Motown he would have had a more consistent career. It's even more ironic given that Gordy's first big break came as one of Wilson's early songwriters in the late '50s. The band also traveled south to record in Muscle Shoals and Atlanta, among other cities. By 1968, Jamerson asked for and received a salary increase of $1000 a week, bringing his yearly income up to $52,000 a year. That's not counting monies earned from bonuses, club dates, and "backdoor sessions." But the following year, things began to change. Jamerson lost one of his closest friends, Motown drummer Benny Benjamin, to heroin addiction. Because of high demand, Motown hired other bassists in an effort to keep up with the ever-expanding recording schedules; Jamerson couldn't be in two places at once. The label's music became more dependent on written musical arrangements and less on the Funk Brothers' "off the cuff" interplay. It was hard for Jamerson to adjust to the seemingly more rigid way of doing things.

Despite being a no-show at record dates, his alcoholism, and the opinion of some Motown staffers, Gordy refused to fire Jamerson. He believed that the bassist still had some music in him. The loyalty paid off, as Marvin Gaye enlisted Jamerson to play on his 1971 multi-platinum What's Going On. In 1973, Motown moved to Los Angeles and Jamerson followed. The following year, the bassist's work schedule seemed to be his busiest ever as he toured with Gaye, Joan Baez, and Maria Muldaur, and recorded jingles, movie scores, TV themes (#Starsky and Hutch), and, of course, million-selling records: Al Wilson's Show and Tell (number ten R&B, number one pop, fall 1973), the Hues Corporation's Rock the Boat (number two R&B for two weeks, number one pop, spring 1974), the Sylvers' Boogie Fever (number one R&B, number one pop, late 1975), Theme From S.W.A.T. by the studio group Rhythm Heritage (number 11 R&B, number one pop, late 1975), and Marilyn McCoo & Billy Davis, Jr.'s You Don't Have to Be a Star (To Be in My Show) (number one R&B, number one pop, fall 1976). He can also be heard on Robert Palmer's Which of Us Is the Fool from his 1976 Island LP Pressure Drop.

Another gold hit that featured Jamerson was Then Came You by Dionne Warwick and the Spinners (number two R&B, number one pop, fall 1974). As far as Warwick was concerned, this was a continuation of a long collaboration. During the '60s, Warwick's songwriting/producing duo, Burt Bacharach and Hal David, would have clandestine rendezvous with the Funk Brothers. But things began to sour for Jamerson as chronic alcoholism, emotional problems, and medication-related mishaps plagued the bassist, leading to his eventual exclusion from the A-list of first-call session players. Much of the last years of Jamerson's life was spent in and out of hospitals and mental institutions, though he managed to produce some sides for singer/songwriter Kenny Kootz.

Just four months after the May 1983 NBC-TV broadcast of #Motown 25: Yesterday, Today and Tomorrow, James Jamerson died from complications due to cirrhosis of the liver, heart failure, and pneumonia on August 2, 1983, at the University of Southern California County Hospital. More than 600 people paid their last respects to Jamerson in churches in Detroit and LA. One of his children, James Jamerson, Jr. grew up to be an in-demand studio bassist, scoring a hit with his group Chanson, Don't Hold Back (number eight R&B, number 21 pop, fall 1978).

Callously overlooked in #Motown 25. . . , the Funk Brothers finally got their due in the excellent 1997 ABC-TV special, #Motown 40: The Music Is Forever, originally airing Sunday and Monday, February 15th and 16th. Despite his tragic later life, James Jamerson is remembered by his family and peers as being a kind and giving man who was always willing to help. For the world's pop music lovers and to the countless musicians that he inspired, he's remembered as the genius whose core contributions helped define the Motown sound. ~ Ed Hogan, Rovi 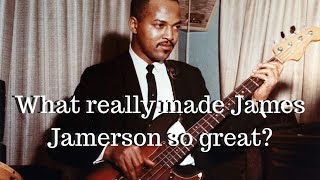 What really made James Jamerson so great? 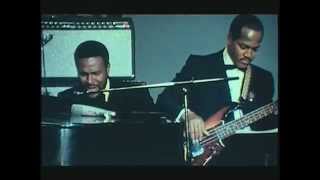 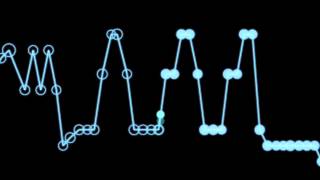 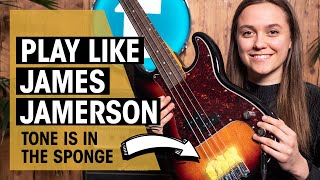 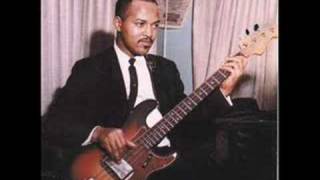 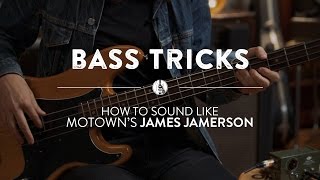 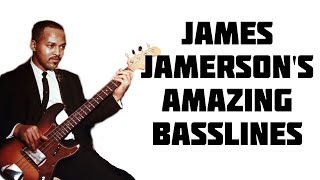