Close
Don Gibson
from Shelby, NC
April 3, 1928 - November 17, 2003 (age 75)
Biography
Singer/songwriter Don Gibson was one of the most popular and influential forces in '50s and '60s country, scoring numerous hit singles as a performer and a songwriter. Gibson's music touched on both traditional country and highly produced country-pop, which is part of the reason he had such a broad audience. For nearly a decade after his first hit single, Sweet Dreams, in 1956, he was a reliable hitmaker, and many of his songs have become country classics -- they have been covered by a wide range of artists, including Patsy Cline, Ray Charles, Kitty Wells, Emmylou Harris, Neil Young, and Ronnie Milsap.

He was born Donald Eugene Gibson in Shelby, NC, the youngest of five children of Solon and Mary Gibson. His father, a railroad worker, died when Gibson was just two years old, and his mother remarried in the early '40s, when Don Gibson was still a boy -- by that time, the family survived as sharecroppers, but even as a boy the youngest Gibson hated farming, and as he grew older he made the decision to get as far away from it as possible. He ceased attending school regularly after the second grade, a decision that he regretted in the years to come -- perhaps in compensation, Gibson subsequently became a voracious reader across much of his adult life. And for all of his professed desire, even at a young age, to break away from a life on the farm, he was hindered by terrible emotional insecurity. Gibson was hopelessly shy all through life, defensive about his appearance -- to the point where, as a boy or a young man, he would avoid walking into places that were too crowded -- and also about his voice, which was characterized by a very bad stutter while he was growing up.

One escape that he had from those and other worries was the music he heard on the radio in the 1930s and early '40s. Even as a young boy, he would listen to the music and try to visualize himself as a performer. He took his first step toward this goal at 14 when he bought a guitar and learned some rudimentary chords. He was soon sitting with the instrument, watching and listening to other, older boys and men playing, and trying to pick up on what they were singing and playing. When he wasn't doing that, he was engaged in his other preferred pastime, making a living in the pool halls around Shelby as a teenage pool shark.

As he approached his mid-teens, Gibson's playing advanced to the point where he was approached by Ned Costner, a fiddle player, who began playing with him at Costner's home. The informal duo soon became a trio with the addition of Curly Sisk on second guitar, and they were soon playing at the Sisk family's home, a boarding house where the three became regular entertainment for the Sisk family and their tenants on Saturday nights. Before long, they even had a name, the Sons of the Soil, with Gibson playing a washtub bass. They were good enough so that in 1948, when Gibson was 16 years old (and Sisk only 14), they were hired as a duo on WOHS, the local radio station. And not long after that, Gibson as singer (but still playing bass, though no longer an adapted washtub) became the focal point of a new band put together by the station's program director, Milton Scarborough (who played accordion in the group). They were christened the Hi-Lighters, with Billy Roberts (trumpet), Gibson and Sisk, Scarborough and Doc Whitmire (accordions), and Jim Barber (fiddle). They were barely paid anything, but the exposure did an enormous amount for the members, especially Gibson, who was overcoming at least the most outward aspects of any insecurity he was feeling.

He was still earning his living doing outside jobs, and the boys apparently didn't think in terms of where to go beyond WOHS. Then, in 1949, fate took a hand when a radio salesman named Marshall Pack chanced to visit the station and heard the Hi-Lighters. He was impressed with the entire group but most especially with Gibson's singing, and he, in turn, convinced Mercury Records producer Murray Nash that the group might be worth an audition. Out of that chance encounter came Gibson's first recording, a set of four songs: Automatic Mama, I Love My Love, Cloudy Skies -- the latter two featuring Gibson, Sisk, and Barber on harmony vocals in the style of the Sons of the Pioneers -- and Why Am I So Lonely; the latter was also the first song written by Don Gibson to see the light of day as a record. All four sides were issued by Mercury, credited to the Sons of the Soil. Any chance that the group ever had of making a name for itself ended later in 1949, however, when Sisk and Barber exited the lineup for a spot in the live stage show of cowboy actor Lash LaRue.

Gibson marked time for a while, until a chance at a contract with RCA Victor opened up in 1950. He put together a new group called the King Cotton Kinfolks and also took back his rhythm guitar spot in the new band. They recorded a demo for RCA A&R chief Steve Sholes at a Charlotte, NC, radio station on October 17, 1950. None of the resulting releases from Gibson's first stay on RCA sold well enough to justify further investment -- the company simply wasn't sure what to do with him as a singer, or with the band, whose sound at that time was honky tonk. They weren't selling a lot of records, but they did have a regular spot on the radio as part of The Tennessee Barn Dance, which gave them some much-needed exposure -- Gibson would remain a fixture on the program for years. In the summer of 1952, Gibson got a new recording contract, this time with Columbia Records through producer Don Law. The dozen songs that he recorded over the two years he was with the label showed phenomenal growth in his range and depth as a singer, but only included a pair of originals -- though one of those, Many Times I've Waited, was impressive.

The turning point for Gibson came after the end of his Columbia contract. He was without a record label for almost a year but still performing regularly, and he soon started to concentrate on writing. In 1955, he began to compose songs in earnest, and one of his originals, Sweet Dreams, especially impressed a friend of Gibson's named Mel Foree, who worked for Acuff-Rose publishers. He, in turn, arranged for Wesley Rose -- a partner in the company -- to see Gibson perform the song. He offered Gibson a writing contract, which he accepted. but only if it included a chance to record. Rose agreed, and Acuff-Rose secured him a contract with MGM Records. This time, with his own song Sweet Dreams as the A-side, the resulting debut single for the label became a Top Ten hit and was covered by Faron Young, who took it to number three at the same time.

Following the success of Sweet Dreams, Gibson was signed to RCA Victor in 1957 by Chet Atkins, who would become his producer for the next seven years. Released early in 1958, Gibson's first RCA single, Oh Lonesome Me, was a blockbuster, spending eight weeks at the top of the country charts and crossing over into the pop Top Ten. That same year, he realized a long-held dream when he made his first appearance at the Grand Ole Opry. Gibson and Atkins developed a pop-friendly style featuring rock & roll flourishes that brought him to a larger audience -- he was a country artist, to be sure, but listening to some of his songs during the late '50s one could also hear the influence of artists such as Elvis Presley and Buddy Holly woven into his work, all sounding perfectly natural. His singing, which was unique in range and expressiveness, was closely matched by his guitar playing, which stood out even on recordings featuring the likes of Hank Sugarfoot Garland, Atkins himself occasionally, and other top Nashville guitarists (as well as Floyd Cramer, et al.).

In the course of 1958-1961, Gibson had a total of 11 Top Ten singles, including I Can't Stop Lovin' You, Blue Blue Day, Who Cares, Don't Tell Me Your Troubles, Just One Time, Sea of Heartbreak, and Lonesome Number One. I Can't Stop Lovin' You, along with a brace of his other compositions, became instant country and pop standards in the hands of other artists, and successful as Gibson was as a recording artist, he was even more influential as a composer -- by the mid-'60s, RCA Victor was issuing albums built on his recordings going all the way back to 1957, and even MGM and Columbia got into the act in 1965, plundering the dozen Gibson songs each that they had in their vaults.

Although his career wasn't as successful in the latter half of the '60s, he still had the occasional Top Ten single, including (Yes) I'm Hurting (1966), Funny, Familiar, Forgotten, Feelings (1966), Rings of Gold (1969), and There's a Story (Goin' Round) (1969); RCA also issued two separate "best-of" volumes on him on LP during this same period, five years apart. During the late '60s, he suffered from alcoholism and drug addiction, but he cleaned up in the early '70s, which led to a comeback in 1971. Switching record labels from RCA to Hickory -- the latter owned by Acuff-Rose -- Gibson had a Top Ten hit with Country Green in 1972. The following summer, he had his last number one single, Woman (Sensuous Woman). He also had a series of duets with Sue Thompson between 1971 and 1976, which were all moderately successful.

After two Top Ten hits in 1974 -- One Day at a Time and Bring Back Your Love to Me -- he settled into a string of minor hits that ran until 1980's Love Fires. During the '80s and '90s, he continued to tour and perform at the Grand Ole Opry. During the 1980s and 1990s, Gibson saw his catalog re-released in several different compilations, including three box sets covering his career up through 1969, by Germany's Bear Family Records, and in the 1990s and early 21st century, RCA/BMG also issued hits compilations on him, as well as licensing the reissue of several of his albums to CD. Gibson died in Nashville on November 17, 2003. ~ Bruce Eder & Stephen Thomas Erlewine, Rovi 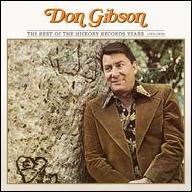 Best of the Hickory Records Years
2018 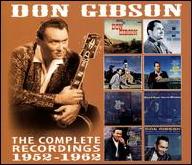 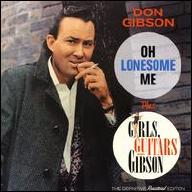 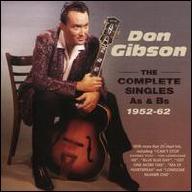