Close
Quintron
Biography
A multi-instrumentalist, showman, and inventor with a dash of mad scientist, Quintron's creativity knows no bounds. His music ranges from the experimental electronics and noise of 1994's I.F. 001-011 to the blend of garage rock, funk, R&B, and New Orleans party music known as "Swamp-Tech" of 1998's These Hands of Mine and 2003's Are You Ready for an Organ Solo? He's frequently joined by Miss Pussycat, whose vocals, percussion, and puppet shows are as integral to Quintron's dynamic live experience as his customized Hammond B-3 and the Drum Buddy, a light-activated analog synthesizer of his own creation. As an organist, he draws inspiration from the stylings of Raymond Scott and Jimmy Smith. He has played with artists ranging from Oblivians on 2000's gospel-tinged Play 9 Songs with Mr. Quintron to Steve Riley the Mamou Playboys on 2012's Grammy-nominated Grand Isle. In the 2010s, Quintron brought the multi-disciplinary aspects of his work to the art world. His participation in installations and residencies resulted in releases including 2011's Sucre du Sauvage and the weather-controlled synth the Weather Warlock, which appeared on 2014's Spellcaster II: Death in Space. With 2020's Goblin Alert!, the first Quintron and Miss Pussycat album to feature a live rhythm section in decades, he continued to find ways to keep his music vibrantly one of a kind.

Quintron (aka Robert Rolston) was born in Germany while his father was stationed there for military service. His family returned to the States, first settling in Mobile, Alabama, and then St. Louis, Missouri. At 17, Rolston moved to Chicago to join the drama troupe Theater Oobleck. Upon his arrival in 1989, he enrolled at DePaul University, where he became involved with the school's drama department. He also joined the cover band Idol Chatter, who performed everything from Talking Heads to Chicago blues. Rolston soon lost interest in college and opted to leave after completing three semesters. By 1990, he was playing drums for the indie band Math and founded Wicker Park's Milk of Burgundy club.

When Math broke up in 1994, Rolston took the opportunity to start a one-man band. He dubbed his new project Quintron, after the name of the company where his dad was employed as an electrical engineer. His first album, I.F. 001-011, was a foray into the sounds of Rolston's homemade percussion that Ypsilanti, Michigan's Bulb Records released in 1994. Around this time, a tour stop in New Orleans' Ninth Ward District brought him to Pussycat Caverns, a venue operated by Panacea Theriac (aka Miss Pussycat). The pair soon became creative and romantic partners, and after the Milk of Burgundy shut its doors in 1995, Theriac joined Rolston on tour, playing maracas and singing backing vocals.

The pair settled in New Orleans, with Theriac working as a seamstress and Rolston as an elementary-school science teacher. He also started the Mighty Mouse Electric Service, where he worked as an electrician. In 1995, Theriac persuaded Rolston to set aside the drums in order to focus on playing organ. He began writing a number of tracks on his Hammond S-6 organ for his second full-length album, The Amazing Spellcaster, which was released on Bulb a month prior to the closing of Pussycat Caverns in March 1996. Looking for a new home, Theriac and Rolston purchased an old house in the Ninth Ward district of New Orleans.

That year, Quintron and Miss Pussycat's puppet band Flossie the Unicorns shared a split single that also appeared on Bulb. In January 1997, Atavistic Records' live compilation CIA Via UFO to Mercury featured an untitled Quintron track, as well as songs by the Flying Luttenbachers, Trenchmouth, the Scissor Girls, and Math. A few months later, Rolston and Theriac celebrated the opening of the Spellcaster Lodge in their basement with performances by Quintron and R&B great Ernie K-Doe, who became a frequent collaborator. Soon after, Quintron teamed up with garage punks Oblivians for Play 9 Songs with Mr. Quintron, a gospel-inspired set that arrived on Crypt Records. Around this time, Rolston and Theriac started their own label, Rhinestone Records, to release their output. Quintron closed the year by contributing the track "Nightclub Organist" to the Skin Graft album Camp Skin Graft: Now Wave Compilation alongside artists such as Bobby Conn, Dazzling Killmen, Melt Banana, Lake of Dracula, Cheer-Accident, and Theriac's puppet band, Flossie the Unicorns.

As the '90s drew to a close, Quintron remained as prolific as ever. In 1998, he issued two albums: July's Bulb release Satan Is Dead demonstrated his knack for forming actual song structures, while November's These Hands of Mine for Skin Graft placed on Rock & Folk magazine's best albums of the year list. On his promotional tour for the release during March 1999, Quintron was met by an audience of hecklers when he appeared on the nationally syndicated Chicago talk show Jenny Jones. During the European tour for These Hands of Mine, Rolston and Theriac recorded a session for John Peel's show on BBC radio. The early part of 2000 was spent working on an infomercial for the Drum Buddy, which converted light into analog rhythm patterns. Hosted by actor Bob Global and Tucson, Arizona weather anchor Rebecca Simms, the infomercial also featured Miss Pussycat, Quintron's friend MC Tracheotomy, the Drum Buddy Dancers, and K-Doe. The surreal 49-minute video aired on late-night television, giving viewers the chance to purchase one of the machines for $999.99. Skin Graft released the Drum Buddy Demonstration Record, Vol. 1, which taught listeners how to play the instrument. Before reaching his self-imposed manufacturing deadline, Rolston made and sold 44 Drum Buddies to fans of adventurous music that included Nels Cline and Laurie Anderson. In September, the Drum Buddy made its recording debut on Quintron's seventh album, The Unmasked Organ Light-Year of Infinity Man. That year also saw the release of Science in the Shape of Birds, the first in a series of split singles with XBXRX for Gold Standard Laboratories (Mardi Gras! followed in 2001, and a third volume featuring Sick Lipstick appeared in 2002).

In 2003, Quintron moved to Three One G for the full-length Are You Ready for an Organ Solo?, while Horseglue Records issued the EP We've Got Each Other. The following year saw the CD release of The Frog Tape, a mix of spooky sounds and cover songs that was originally sold as a cassette during Quintron and Miss Pussycat's Halloween Tour. In 2005, Tigerbeat6 released the CD/DVD album Swamp Tech, which featured new music from Quintron and an accompanying puppet movie by Miss Pussycat. Just before the duo went on tour to support the album, Hurricane Katrina hit New Orleans. While both Quintron and Miss Pussycat were fine, their house sustained water damage and the pair lost instruments and puppet-making supplies. Quintron and Miss Pussycat continued with the tour, which also included a series of benefit concerts to help them rebuild in the wake of the disaster. In September 2006, they were able to reopen the Spellcaster Lodge. Following 2007's Jamskate EP, Quintron made his Goner Records debut with 2008's full-length Too Thirsty for Love. Recorded at New Orleans' Museum of Art and City Park from January to May 2010, the double album Sucre du Sauvage arrived in early 2011.

Later in 2011, Quintron embarked on a project that would shape his work and life for years to come. As part of Brooklyn-based visual artist Swoon's installation The Music Box, which comprised a "musical village" of structures that could be played as instruments, Rolston contributed an instrument then known as the Singing House, a seven-foot tall synthesizer controlled by the weather. The following year, Quintron was nominated for a Grammy Award for his songwriting contributions to Steve Riley the Mamou Playboys' Grand Isle, including a version of his song "Chatterbox." He continued to work on the synth, renaming it the Weather Warlock and refining it during the dual artists' residency he and Miss Pussycat took on Florida's Captiva Island in 2013 and throughout his treatment for stage four lymphoma. While recovering, Rolston managed to play a few shows and appear on the HBO TV series Treme. Part of Quintron's 2014 album Spellcaster II: Death in Space -- which featured the Weather Warlock -- served as the soundtrack to the short sci-fi film Mizra the Miraculous by filmmaker Brent Joseph. Rolston then took the Weather Warlock on tour, picking up guitar for the first time and playing with collaborators that included members of the Sun Ra Arkestra, the Germs' Don Bowles, Steve Shelley, and Sean Lennon. Quintron showcased these droning synth and guitar collages on 2015's Sunset Waits for No Man. He also launched Weather for the Blind, a streaming website featuring the Weather Warlock's real-time interpretations of New Orleans' weather.

Over the next few years, Quintron and Miss Pussycat pursued various projects, including Rolston's surreal 2017 travelogue Europa My Mirror; exhibitions of Theriac's artwork and puppets; and the side project First, a punk band designed to be the opening act at shows. In 2020, Quintron debuted the Bath Buddy, a water monitor and alert system. That October, he and Miss Pussycat issued their first album together since Sucre du Sauvage. Recorded with the Oblivians and Reigning Sound's Greg Cartwright at Gainesville, Florida's Pulp Arts studio, Goblin Alert! was also the first Quintron album recorded with a full band (bassist Danny Clifton, drummer Sam Yoger, and talk box master Bênní). ~ Heather Phares & Stephen Howell, Rovi 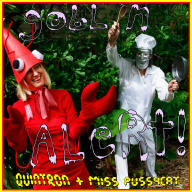 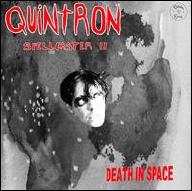 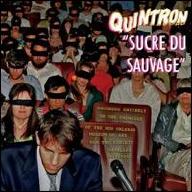 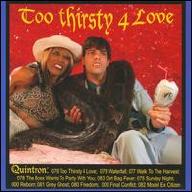 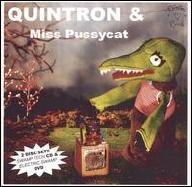 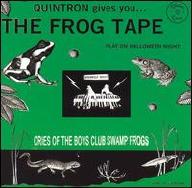 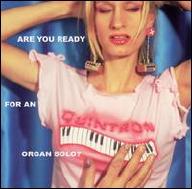 Are You Ready for an Organ Solo?
2003
Videos
Close 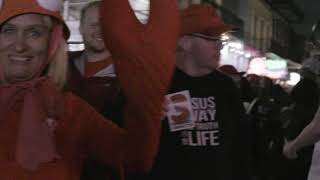 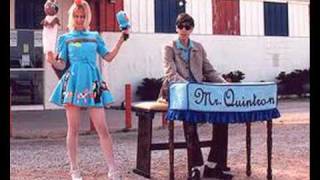 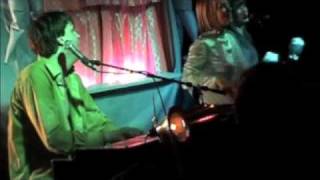 quintron- witch in the club 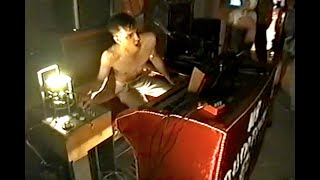 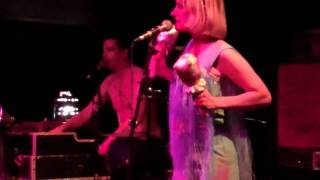 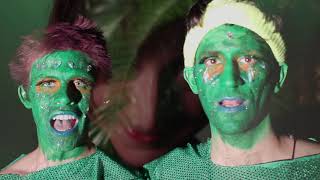 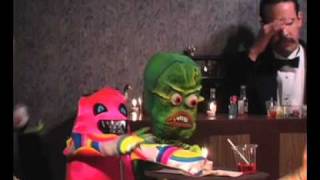 Quintron and Miss Pussycat: "Face Down In The Gutter"
Available here: