Close
Bob Hope
from Eltham, Kent, England
May 29, 1903 - July 27, 2003 (age 100)
Biography
The facts surrounding the multi-decade, multi-generational success of Bob Hope are irrefutable. He was a resounding success -- a true star -- on the Broadway stage, in movies, on radio, and television, staying with NBC in the latter two ventures for over half-a-century. He appeared in over 70 movies in a film career that spanned four decades. He logged over six million miles entertaining troops in both war and peace time, becoming a goodwill ambassador to every country he traveled to. He became an American show business icon and perhaps one of the richest entertainers this country ever produced, the cable and video age notwithstanding.

But with the success came the assertion that Hope was little more than the Michael Bolton of standup comics; adored by millions, but with no respect forthcoming from his immediate peer group. Groucho Marx once acerbically opined that Hope was merely a public-address system for a joke machine fed by an army of writers. High irony indeed, especially for a comic who made his stand as a master of the ad-lib, ready for any situation that crossed his path.

It also seems ironic that the man who became an American comedic institution wasn't actually born in the United States. He was born Leslie Townes Hope, in the London suburb of Eltham on May 29, 1903. Sired into a brood of six sons, he found himself in America with his family by his fourth year, settling in Cleveland, OH. His mother -- who had been a concert singer -- instilled in him a love for music and entertaining. Hope would later claim that he first warmed to an audience laughing at him when his voice cracked while singing at a family backyard reunion. His boyhood and teen years were spent in a variety of odd jobs; newspaper boy, bootblack, shoe salesman, butcher's mate, stock boy, golf caddy, and even a short spell as a prizefighter, working under the name Packy East. During this time he was the regular winner of local talent contests with his impression of Charlie Chaplin and, under the tutelage of African American tap dancer King Rastus Brown, had developed into a fair enough hoofer that he opened up his own dance instruction studio. His first professional turn came at the age of 18, as part of a dance act with his then girlfriend, Mildred Rosequist. By 1924, he had a new partner and was working as "Two Diamonds on the Rough." They opened the bill one night for down-and-out silent comedian Fatty Arbuckle, who was so impressed that he recommended the act to Fred Hurley, the producer of a small-time vaudeville musical comedy ensemble. In Hurley's Jolly Follies, Hope not only danced and sang, but played a rudimentary saxophone and appeared in blackface during several comedy sketches. This was vaudeville on-the-job training at its finest, or worst, if one had to endure the work schedule and traveling conditions of the day. Sometime during his tenure with Hurley, he changed his stage name to Bob Hope.

The next important step in his development as a comedian came when he was called to fill in as a master of ceremonies at a small vaudeville house in New Castle, PA. Liberating several then-fashionable Scotsman jokes that he had been polishing up for public consumption, Hope scored big enough to decide to go on as a solo act, no longer appearing in blackface or wearing the tiny derby hat and huge red bow-tie that were part of his regular stage outfit. He stretched a one-week appearance as an emcee at Chicago's Stratford Theater into a six-month engagement. It was here that Hope developed his mastery of the spontaneous ad-lib, making him able to parry and joust with anything an audience member or fellow comic could throw at him.

From his triumph at the Stratford, Hope moved on to the greener pastures of Broadway, making his Palace debut in the musical comedy Ballyhoo of 1932. The following year he appeared in Jerome Kern's musical, Roberta, and became a Broadway star. Holding his own with the bigger names in the cast, Hope showed remarkable restraint in his delivery, establishing a light comedic touch that took some of the edge off his rapid-fire delivery. This put him in good stead in future Broadway productions, including Red, Hot, and Blue and the Ziegfeld Follies.

The next logical step was radio, with its magical coast-to-coast allure of "playing everywhere at the same time." After guest spots and semi-regular work on such forgotten shows as the #R.K.O. Theater of the Air, #The Woodbury Soap Show, #The Atlantic Oil Show, and the improbably named #Bromo-Seltzer Intimate Hour, Hope struck paydirt with his own show on NBC sponsored by Pepsodent toothpaste, a relationship that would last for the next 15 years.

Unlike a Jack Benny or a Fred Allen, Hope never really developed a situation-type comedy format, but went instead in an entirely different direction. On his 30-minute program, the opening monologue set the tone for the rest of the show, not unlike today's late-night talk shows. His machine-gun delivery, where no joke was any more important than the next one coming up ("and I wanna tell you" would became a Bob Hope catch phrase after almost every punch line; whether the joke brought uncontrolled laughs or a mild titter, it gave the audience a chance to get it), was honed to perfection during this period and proved to be perfect for the medium. It has been argued that every comedian without a defined character (Eddie Cantor, for example) had to start fresh with an audience every time. With Hope, it was as if he was starting fresh with each punch line. His joke file was as cutting edge as anyone, firing off barbs about current news events with alarming frequency. Soon, in the minds of his radio audience, he became the more citified and modern extension of the late humorist Will Rogers. When a news story broke, everybody wanted to know what Bob Hope was going to say about it on his next show.

It was during this immense radio success that he cultivated the most identifiable aspect of his character and the one he would always turn to as the years slowed his delivery down to a crawl; the seasoned performer exuding more self-assuredness than anyone who had ever walked on a stage. Around this time, Hope also developed his counter stage persona; a star who just happened to be an American Everyman, complete with all of the personality failings -- greed, cowardice, lechery, jealously, vanity -- endemic of the human condition. He would play one character against the other for the rest of his career and no comedian got as much mileage out of being a coward as Bob Hope.

Hollywood came a-calling in the early '30s with a series of marginally successful shorts for Educational and Warner Brothers. His first full-length movie debut came with #The Big Broadcast of 1938, introducing him singing what would become his theme song, Thanks for the Memories. Two years later, he was teamed up with crooner Bing Crosby for a successful series of #Road pictures, starting with #The Road to Singapore and ending with #The Road to Hong Kong some 22 years later. The team of Hope and Crosby -- usually playing down-on-their-luck entertainers -- was a well-oiled machine, with both men swapping their respective talents (Crosby as comic, Hope as song-and-dance man) and having a grand old time in the process. Hope's other notable films during this period include #The Seven Little Foys, #Paleface, #Fancy Pants, #Beau James, and #The Lemon Drop Kid.

The rise in popularity of television soon compelled him to join the fray. Doing numerous guest shots and specials for NBC in the early '50s, his annual trips overseas to entertain the troops -- which had started full bore during World War II, helping to establish the USO -- soon became a regular Christmas television event. By the end of the '60s however, Hope's hawkish, right-wing political stance was at odds with the country's mood concerning the Vietnam War, and it cost him nearly all the credibility that 30 years of performing had built up. He had become that most odious of all celebrities, one whose politics cannot be separated from their stage persona. If there could be said to be any show-business casualties from the Vietnam War, then Bob Hope's name would certainly head that list. For the first time in years of traveling to entertain the troops, he found his welcome less than enthusiastic. Hope, who had entertained Presidents throughout his career without becoming political himself, had finally crossed the line and it cost him dearly.

His career -- although still profitable -- was never quite the same after that moment in time. Although he would continue into the next three decades doing tired specials with current NBC TV stars, Hope was quickly becoming an anachronism, getting slower and slower, his style becoming more corny, mannered, and clichéd with each successive broadcast. In 1996, NBC announced that their contract with Bob Hope was coming to an end after 60 consecutive years of broadcasting over their airwaves. His network broadcast of that year, #Bob Hope Salutes the Presidents, was his final Christmas special, capping a long-running tradition. Nearing total blindness and with his performing days behind him, Hope must have found comfort in knowing that his 70-plus years in show business were well spent and most profitable, eventually making him one of the richest entertainers of all time. Hope passed away July 7, 2003 at the remarkable age of 100. Conquering stage, movies, radio, and television, Bob Hope was -- and remains -- an American comedy institution. ~ Cub Koda, Rovi 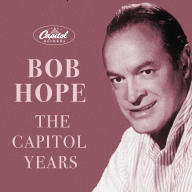 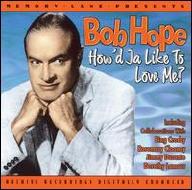 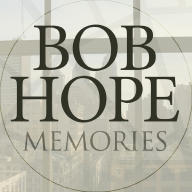 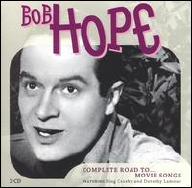 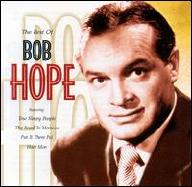 Thanks for the Memory: The Best of Bob Hope
2003 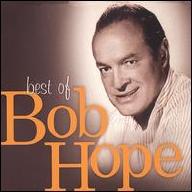 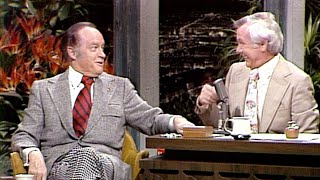 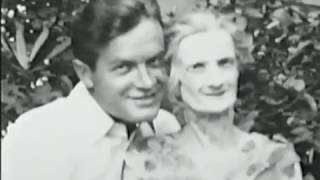 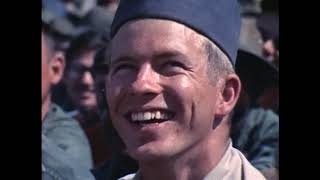 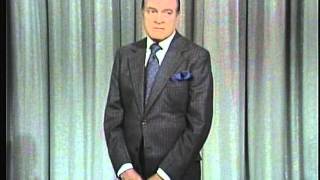 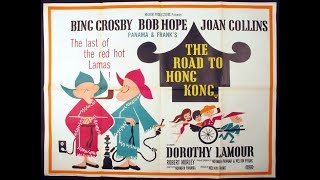 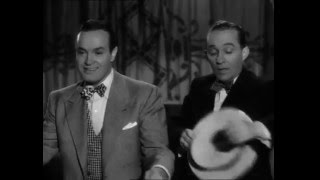 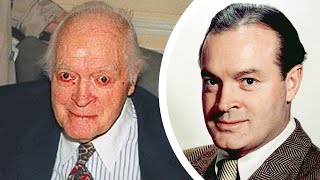