Close
Alejandro Escovedo
from San Antonio, TX
January 10, 1951 (age 70)
Biography
A celebrated singer and songwriter, Alejandro Escovedo has as eclectic a background and body of work as any rock artist of his generation. As comfortable performing with a string ensemble as he is with an amped-up power trio, and as likely to bare his soul in his lyrics as he is to lay out some serious rock & roll swagger, Escovedo had already played an important role in punk (with the Nuns), roots rock (the True Believers), and alt-country (Rank File) before he launched a solo career that's seen him work with everyone from John Cale to Bruce Springsteen. Beginning with 1992's Gravity, Escovedo's music has been literate, ambitious, and eclectic, with many of his best albums -- 1996's With These Hands, 2001's A Man Under the Influence, and 2006's The Boxing Mirror -- exploring different genres and approaches from track to track, while his albums with producers Tony Visconti (2008's Real Animal, 2010's Street Songs of Love) and Peter Buck & Scott McCaughey (2016's Burn Something Beautiful) helped him focus on passionate, guitar-based rock & roll.

Escovedo was born in San Antonio, Texas on January 10, 1951, one of 12 children. His family was steeped in music: His father played in mariachi bands and swing combos both before and after he emigrated from Mexico to the United States. Alejandro's half-brother Pete Escovedo was a jazz artist and studio musician; he was a member of Santana and founded the group Azteca. Another half-brother, Coke Escovedo, also worked with both jazz and Latin groups, enjoyed a solo career, and was a member of Santana and Malo. Pete's daughter Sheila Escovedo became a pop star as Sheila E. Alejandro's younger brother Javier Escovedo founded the early Los Angeles punk band the Zeros. And another younger brother, Mario Escovedo, played in the hard rock outfit the Dragons.

Given his family's history, it's no surprise that Alejandro developed a passion for music. He moved with his family to California and attended high school in Huntington Beach, where he frequented local rock clubs and ballrooms, seeing acts like Jimi Hendrix, Buffalo Springfield, the Doors, the Seeds, and the Flying Burrito Brothers. While Alejandro was a serious music fan, he didn't take to playing an instrument right away, and when his father gave him a guitar, he ended up passing it on to his brother Javier. Alejandro moved to Hollywood in 1973 after the breakup of his first marriage, and he became a fan of glam and proto-punk acts like the New York Dolls and the Stooges, who frequently played on the Sunset Strip. He also saw an early L.A. appearance by Patti Smith, where he would meet his second wife, Bobbie Levie. In 1975, Escovedo moved to San Francisco, where he intended to study film production. He and his friend Jeff Olener hatched an idea for a movie about a rock band that couldn't play, and while casting the picture, they ended up forming an actual band, the Nuns, who were one of the first acts of note on the San Francisco punk rock scene. The Nuns became a steady draw on the West Coast, and were one of the opening acts when the Sex Pistols played their infamous final show at Winterland in San Francisco. However, when the Nuns set out on an East Coast tour, Escovedo immediately fell in love with New York City, and opted to stay there rather than return to the Bay Area.

Escovedo became a figure on New York's Lower East Side music scene, and joined the band of avant-garde vocalist Judy Nylon, but in 1980 he got a call from Chip Kinman of the Los Angeles-based leftist punk band the Dils. The Dils had just broken up and Kinman and his brother Tony were forming a new band that would mix punk energy with country song structures; was Alejandro interested in joining? Escovedo said yes, and after the Kinman Brothers moved to New York, they formed Rank and File. Before long, the group settled in Austin, Texas (in part because Escovedo was eager to get away from the drugs that surrounded the New York scene), and Escovedo played on their outstanding 1982 debut album, Sundown. However, he quit Rank and File in 1983 when he and his brother Javier chose to start a band of their own, the True Believers. With Austin native Jon Dee Graham joining Alejandro and Javier on guitars, the True Believers fused a rootsy approach with a heartfelt rock & roll attack, and they were stars in Austin and a favorite with critics. However, their self-titled debut album (released in 1986) didn't quite capture their on-stage impact, and a reorganization at their record company led to their second album being pulled from release only two weeks before it was due to come out. Frustrated, the True Believers broke up in 1988 (a retrospective album, Hard Road, was released in 1994 and included their unreleased second album), and Alejandro and Javier formed the short-lived, glam-influenced band Buick MacKane, who made little impact outside of Austin. During his time with the True Believers, Alejandro began focusing more seriously on his songwriting, and as he worked a day job at a record store, he began working out material with a diverse range of Austin musicians. Escovedo was soon playing out with a rotating variety of players he dubbed the Alejandro Escovedo Orchestra (which usually did feature a string section), and he developed a new following in Austin. However, his marriage with Levie was falling apart, despite the couple welcoming a daughter in 1990, and the failing relationship began informing Escovedo's songs. In 1991, Levie committed suicide, and a year later, Escovedo released his first solo album, Gravity, through Austin's Watermelon Records label. A striking meditation on love, loss, and grief, Gravity received rave reviews, and Escovedo threw himself into his solo career. In 1993, he released his second album, Thirteen Years, a concept piece informed by the rise and fall of his marriage to Levie. In 1994, Escovedo formed a one-off semi-supergroup, the Setters, with fellow songwriters Michael Hall and Walter Salas-Humara, and signed a deal with Rykodisc, the independent label that successfully released the True Believers anthology. In 1996, they released With These Hands, Escovedo's ambitious third solo album, and a collection of Buick MacKane material, The Pawn Shop Years, followed in 1997. However, Escovedo's relationship with Rykodisc quickly crumbled when sales of With These Hands proved disappointing, and he was soon without a label.

It wasn't long before he found new champions at Bloodshot Records, Chicago's pioneering "insurgent country" label. Escovedo had assembled an album from a handful of live recordings, and Bloodshot released More Miles Than Money: Live 1994-1996 in 1988, in time for Escovedo to be named "Artist of the Decade" by alternative country journal No Depression. Escovedo also appeared on a Bob Wills tribute album assembled by Jon Langford with his ad hoc group the Pine Valley Cosmonauts, and in 1999 he released Bourbonitis Blues, a combination of live tracks and studio material that featured fresh originals alongside covers of songs by Ian Hunter, John Cale, and the Gun Club, among others. 1999 also saw Escovedo appear on the album More Oar: A Tribute to the Skip Spence Album, which featured him alongside Robert Plant, Tom Waits, Beck, Robyn Hitchcock, and many more. In 2001, he released A Man Under the Influence, an ambitious and musically diverse set that earned him some of his best reviews to date. The album also received some scattered airplay for the song "Castanets," though when Escovedo learned the song appeared in a mix on President George W. Bush's iPod, he declined to perform it again until Bush left office. Two songs on A Man Under the Influence were originally written for a play on the Mexican-American immigrant experience, By the Hand of the Father, and an album of the show's full score was released in 2002.

In April 2003, Escovedo was performing By the Hand of the Father in Tempe, Arizona when he collapsed shortly after the show ended, having vomited up blood earlier that day. He was living with Hepatitis C, contracted during a dalliance with hard drugs during his days in New York, and the disease was threatening to claim his life. A longtime heavy drinker, Escovedo gave up alcohol and took on a rigorous regiment of treatment. Lacking medical insurance, fans and musicians began sponsoring benefits to help cover his hospital bills, and in 2004, a double album entitled Por Vida: A Tribute to the Songs of Alejandro Escovedo was released to raise more money for the artist, featuring interpretations of his songs by Lucinda Williams, Los Lonely Boys, Charlie Musselwhite, Ian Hunter, the Jayhawks, the Minus 5, and 25 others. A collection of performances by the Alejandro Escovedo Orchestra was also released to fans under the title Room of Songs in 2005.

John Cale, long one of Escovedo's major influences, recorded a version of "She Doesn't Live Here Anymore" for Por Vida, and when Escovedo was healthy enough to begin working again, he invited Cale to produce his next album. The Boxing Mirror, his first release under a deal with the EMI-distributed Back Porch Music imprint, was a powerful but low-key effort released in 2006. In 2008, Escovedo went into the studio with David Bowie and T. Rex producer Tony Visconti to cut a lean rock & roll album, Real Animal, a set of songs co-written with guitarist Chuck Prophet, who anchored his new road band, the Sensitive Boys. Escovedo also joined a new management team, Jon Landau and Barbara Carr, who also handled Bruce Springsteen's career. Springsteen, a fan, brought Escovedo on-stage with him to perform a duet version of "Always a Friend" during a stadium show in Houston, which appeared on Springsteen's EP Magic Tour Highlights. Springsteen also made a guest appearance on 2010's Street Songs of Love, another Visconti-produced set that was Escovedo's first release through Fantasy Records. 2012's Big Station would prove to be Escovedo's last album with Visconti and Prophet; he broke up the Sensitive Boys, and in 2014 set out on a co-headlining tour with former R.E.M. guitarist Peter Buck, in which Buck and his band (guitarist Kurt Bloch of the Fastbacks, bassist Scott McCaughey of the Young Fresh Fellows and the Minus 5, and drummer Bill Rieflin of Ministry and Swans) backed up Escovedo after finishing their own set.

A second tour with Buck and his band was put on hold after Escovedo had another health scare, and while honeymooning in Mexico with his fourth wife, Nancy Rankin, the couple's vacation home was hit by a Category Four storm, Hurricane Odile. The two struggled with PTSD in the wake of the hurricane, and both went into treatment as they struggled with its aftereffects. Rankin's work led the couple to spend several weeks in Dallas, Texas, and Escovedo was invigorated by his new surroundings after becoming disenchanted with the growing gentrification of Austin. The Escovedos settled down in Dallas, and as they healed both physically and emotionally, Alejandro returned to an album he had planned to write and record with Buck and McCaughey. Recorded in Portland, Oregon with Buck, McCaughey, Bloch, and drummer John Moen of the Decemberists, 2016's Burn Something Beautiful also included guest appearances from Corin Tucker of Sleater-Kinney, Steve Berlin of Los Lobos, and frequent Neko Case collaborator Kelly Hogan.

A tour of Europe found Escovedo sharing stages with the Italian rock band Don Antonio, and Escovedo struck up a friendship with the group's leader, Antonio Gramentiere. The two collaborated on a set of songs about two young men -- one from Italy, one from Mexico -- who come to America to follow their dreams. Escovedo recorded the songs on his 2018 album The Crossing; Don Antonio served as his backing band for the sessions, with guest appearances from Wayne Kramer of the MC5, James Williamson of Iggy and the Stooges, and Peter Perrett of the Only Ones. ~ Mark Deming, Rovi 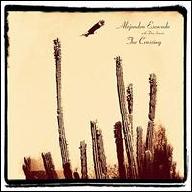 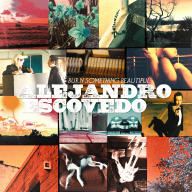 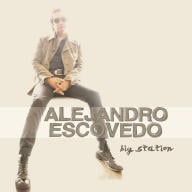 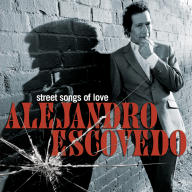 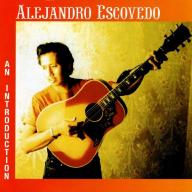 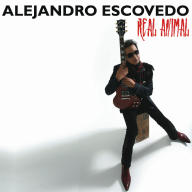 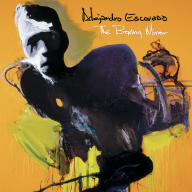 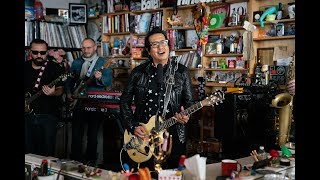 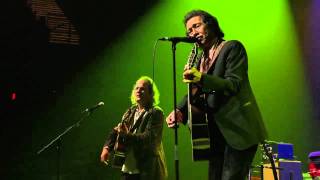 Sally Was A Cop | Alejandro Escovedo 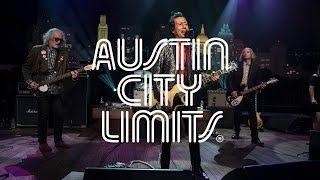 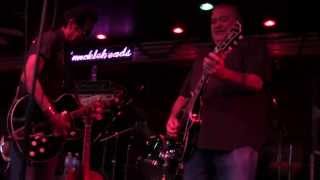 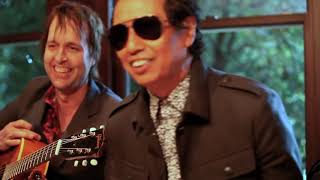 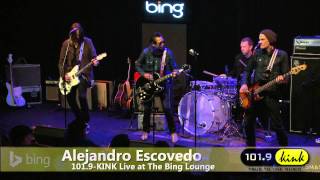 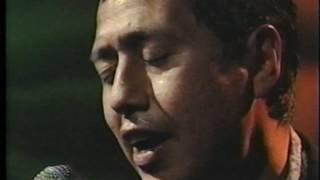