Close
Moby
from New York, NY
September 11, 1965 (age 56)
Biography
New York City singer/songwriter and producer Moby was one of the most important electronic dance music figures of the '90s, whose crossover success helped bring the sound into the mainstream and established him as a progenitor to the crop of superstar DJs that would define the next wave of popular electronic music. At the peak of his breakthrough visibility, he courted controversy for putting a public face to the notoriously anonymous electronic genre and attracting scorn from techno purists. Early on, Moby fused rapid disco beats with heavy distorted guitars, punk rhythms, and detailed productions that drew equally from pop, dance, and movie soundtracks. Not only did his music differ from both the cool surface textures of ambient music and the hedonistic world of house music, but so did his lifestyle; Moby was famous for his devout Christian beliefs, as well as his environmental and vegan activism. First breaking into the British Top Ten with the 1991 single "Go," he soon established himself in the U.S. as one of the scene's premier producers with 1995's critically acclaimed Everything Is Wrong. After a brief foray into punk rock introduced fans to his other sonic inspirations, Moby transitioned into a new role as a crossover pop star with 1999's seminal blockbuster Play. While his chart success would not reach the same heights again, he maintained his fan base with steady, reliable output, swapping between traditional house tracks and expansive ambient collections into the 2020s. Occasionally, he even dipped back into guitar-based, politicized anthems with side band the Void Pacific Choir. In 2021, he issued his 19th full-length, the reimagined retrospective Reprise.

Born Richard Melville Hall, Moby received his nickname as a child, derived from the fact that Herman Melville, the author of Moby Dick, is his great-great-granduncle. He was raised in Darien, Connecticut, where he played in a hardcore punk band called the Vatican Commandos as a teenager. Later, he briefly sang with Flipper while their singer was serving time in jail. He briefly attended college before he moved to New York City, where he began DJing in dance clubs. From the late '80s through 1990, he released a number of singles and EPs for the independent label Instinct. In 1991, he set the theme from David Lynch's television series Twin Peaks to an insistent house-derived rhythm while remixing his track "Go," the B-side to his debut single, "Mobility." The updated "Go" became a surprise British hit single, climbing into the Top Ten. Following its success, Moby was invited to remix a number of mainstream and underground acts, including Michael Jackson, Pet Shop Boys, Brian Eno, Depeche Mode, Erasure, the B-52s, and Orbital.

Moby continued performing at dances and raves throughout 1991 and 1992, culminating in a set at 1992's Mixmag awards, where he broke his keyboards at the end of his concert. Moby, his first full-length album, appeared in 1992, although it was released without Moby's involvement and contained tracks that were at least a year old at the time. In 1993, he released the double A-sided single "I Feel It"/"Thousand," which became a moderate U.K. hit. According to The Guinness Book of Records, "Thousand" is the fastest single ever, appropriately clocking in at 1,000 beats a minute. That same year, Moby signed a record contract with Mute in the U.K. and major-label Elektra in the U.S. His first release for both labels was the six-song EP Move. His previous American label, Instinct, continued releasing CD collections of his work against his wishes. These included Ambient, which compiled unissued material recorded between 1988 and 1991, and Early Underground, which collected tracks from several of his singles and EPs under different pseudonyms, including the original version of "Go." The Story So Far, a U.K. version of Moby with a different track listing, also appeared. In 1994, the single "Hymn" -- one of the first fusions of gospel, techno, and ambient music -- was released.

The song reappeared as the lead track to Everything Is Wrong, his first album released under his new record deals. The full-length appeared in the spring of 1995 to uniformly positive reviews, especially in the American press, which had previously ignored him. Despite the promotional push behind the album and his popular sets at the 1995 Lollapalooza festival, the album wasn't a commercial success. "Bring Back My Happiness," however, was a Top Ten hit on Billboard's club chart. The following year, Moby revisited his roots in heavy guitar-based music for 1996's Animal Rights, which featured a cover of Mission of Burma's "That's When I Reach for My Revolver" and received mixed reviews. He also released The End of Everything, an ambient techno album credited to his occasional pseudonym Voodoo Child, on Trophy Records, his own sublabel of Mute. One year later, Elektra collected his soundtrack highlights for I Like to Score, a compilation that included his remix of "The James Bond Theme" for Tomorrow Never Dies, as well as contributions to Cool World, Heat, and Scream.

Moby's fifth studio album, Play, appeared in 1999. Surpassing everyone's expectations, the record -- featuring numerous samples of Alan Lomax field recordings -- went double platinum in the U.S. and reached number one in the U.K. Aside from its hit singles, Play's success was assured when its tracks were licensed by dozens of advertisers and compilers. Always a restless producer, Moby followed Play with 18 (2002), a relatively reflective and restrained set dotted with an eclectic list of guest vocalists (including MC Lyte, Angie Stone, and Sinéad O'Connor). It debuted at number four on the U.S. Billboard 200 but didn't come close to catching Play in terms of sales.

The downward trend in mainstream appeal continued with Hotel (2005), a mixture of basic contemporary rock and downbeat electronica; early copies were bundled with an ambient disc worthy of separate release. On Last Night, seemingly unaware of contemporary trends in dance music, Moby made a return to club hedonism with some of his most creative -- if unapologetically nostalgic -- material. The austere and morose Wait for Me (2009), featuring a show-stealing appearance from soul singer Leela James, was just the opposite in tone. Destroyed (2011), recorded during late-night sessions in hotel rooms, offered a natural extension of Wait for Me's alienated feel. The companion piece Destroyed Remixed (2012) followed shortly thereafter; a limited double-disc compilation, it featured exclusive remixes by David Lynch, Holy Ghost!, and System Divine, as well as a previously unreleased 30-minute ambient piece by Moby himself.

After several appearances in early 2013, including DJ sets at the Coachella Festival, Moby released a single for Record Store Day entitled "The Lonely Night," which featured vocals from Mark Lanegan. The song was included on Innocents, a predominantly downcast album released that October. Other guest vocalists included Damien Jurado, the Flaming Lips' Wayne Coyne, and Skylar Grey. Three shows were performed in support of the album, all of which took place at Los Angeles' Fonda Theatre. A two-CD/two-DVD documentary, Almost Home, was released in March 2014. Late that year, Moby issued an expanded edition of Hotel Ambient, which was originally featured as a bonus disc on the limited-edition version of 2005's Hotel. An additional ambient collection, Long Ambients 1: Calm. Sleep., was later released as a free download.

During the latter half of 2015, Moby debuted Moby the Void Pacific Choir. The first single, "The Light Is Clear in My Eyes," brought back some of the post-punk-inspired crunch from Animal Rights. The following May, he published Porcelain: A Memoir, which focused on his life in the '90s. The book was complemented by a two-disc collection that included Moby highlights from that decade and a selection of tracks by artists who influenced him, including the Jungle Brothers, 808 State, and A Tribe Called Quest. An album from Moby the Void Pacific Choir, These Systems Are Failing, arrived later in the year. The second Void Pacific Choir effort, More Fast Songs About the Apocalypse, was issued in the summer of 2017. Moby returned the following year with Everything Was Beautiful, And Nothing Hurt. Taking its title from Kurt Vonnegut's book Slaughterhouse-Five, the album also saw him looking back to classic trip-hop for influence. In a charitable move, Moby announced that the proceeds from his 17th full-length, 2020's All Visible Objects, would be donated to a variety of charities with each track benefiting a different organization ranging from animal rights to environmental welfare. He capped the year with Live Ambients - Improvised Recordings Vol. 1.

For his 19th set, he recruited an impressive roster of guests for the career retrospective Reprise. Released in 2021 on Deutsche Grammophon, the album reimagined past tracks with orchestral and acoustic arrangements, pairing the likes of Gregory Porter and Amythyst Kiah for Play's "Natural Blues" and Kris Kristofferson and Mark Lanegan for "The Lonely Night." Moby also teamed with My Morning Jacket's Jim James for "Porcelain." ~ Stephen Thomas Erlewine & Andy Kellman, Rovi 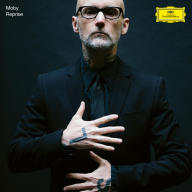 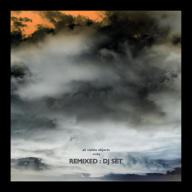 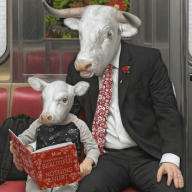 Everything Was Beautiful, And Nothing Hurt
2018 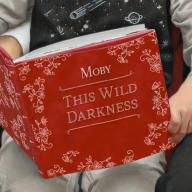 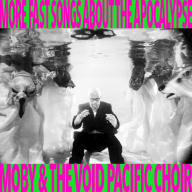 More Fast Songs About The Apocalypse
2017 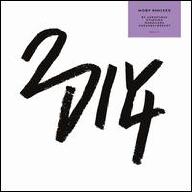 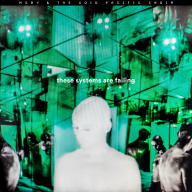 These Systems Are Failing
2016
Videos
Close 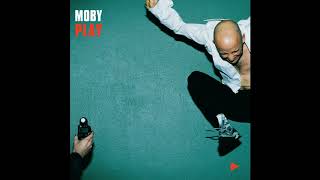 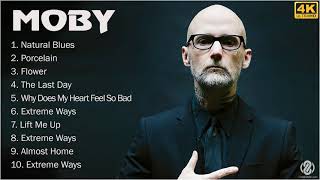 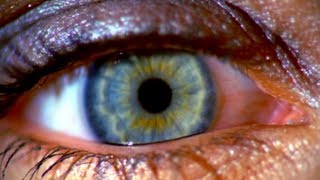 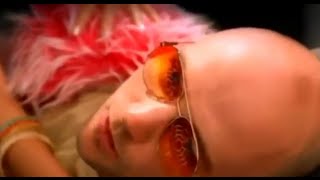 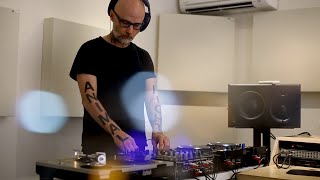 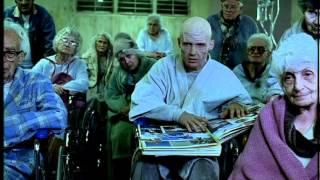 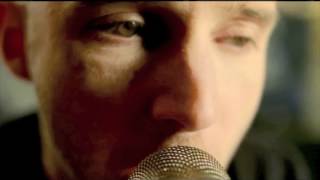