Close
Willem Breuker
from Amsterdam, The Netherlands
November 4, 1944 - July 23, 2010 (age 65)
Biography
Dutch saxophonist, clarinetist, composer, and bandleader Willem Breuker was probably the single most well-known, prolific, and influential figure in 20th century Dutch music. From his early free jazz days to his role as longtime leader of the successful Willem Breuker Kollektief, he accomplished much in creative music from the 1960s into the 21st century. In addition to performing, Breuker helped instigate changes in government subsidies for jazz and improvised music, he co-founded two important independent Dutch labels -- ICP and BVHaast -- and he unabashedly mixed genres and incorporated humor and theater into his compositions, with a love of experimentation and a definite dedication to music.

On November 4, 1944, Willem Breuker was born into the final (and bare-bones) winter of WWII and grew up in a middle-class home in Amsterdam East. He recalled a childhood filled with sound and music: loud neighbors, the yelling fish merchant, a marching band that rehearsed nearby, a barrel organist -- all of these would leave their mark on the young boy. He first heard jazz around the age of ten, when he heard Dutch alto saxophonist Piet Noordijk (with whom Breuker would later play) over the radio. Breuker began taking music lessons around this time, studying singing, and, eventually, the clarinet. Even then, Breuker enjoyed improvising, and it wouldn't be very long before he wanted to play his own music. From early on, Breuker was listening not only to jazz such as Count Basie, but also modern classical including Béla Bartók, Charles Ives, and Arnold Schoenberg. In fact, Breuker told of being interested in just about every kind of music he heard, except for rock & roll.

He had the opportunity to learn another instrument, the bass clarinet, by joining a group that already owned one but needed a clarinetist. Breuker was eventually kicked out of the band rather publicly and had to relinquish the bass clarinet after a TV appearance by the band at the Loosdrecht Jazz Festival. The same musicians who took back the instrument would play in Breuker-led events many years later. After being denied admission to Amsterdam's conservatory, Breuker began attending night school, with plans of becoming a teacher. But before he got his degree, Breuker was working professionally as a musician. Breuker quickly became more interested in playing originals than jazz standards, and so he began composing in the early '60s. Around this time, he also performed at jazz competitions, sometimes winning prizes and sometimes causing quite a scandal. One of the best-known incidents involved Breuker covering some well-known songs penned by one of the festival organizers. He originally planned on including the songwriter in the performance, but the two did not get along and, in the end, Breuker played them horribly, on a plastic flute with his own made-up words -- much to the amusement of the audience and the horror of the judges. It was during these competitions that Breuker was first heard by bandleader Theo Loevendie and pianist Misha Mengelberg.

Breuker was invited to join Mengelberg's quartet, but the new quintet lineup only lasted a few gigs before the two more traditional players, bassist Rob Langereis and saxophonist Piet Noordijk, left the band. Bassist Maarten Altena joined on for a while but left after the quartet's 1967 festival appearances, leaving Mengelberg's band a trio. Meanwhile, Breuker and drummer Han Bennink also had a duo project going, the New Acoustic Swing Duo, and released their first duo recording (this self-titled album was reissued in 1984) on their own label, ICP (Instant Composers Pool). Mengelberg became the third equal member of ICP and their label name quickly became an umbrella for a wide variety of lineups. It wasn't too long before these groups included either Breuker or Mengelberg but not both, as the two musicians had clashing opinions on approaches to live performance, what ICP should be, and many other musical issues. Breuker wanted tunes and rehearsals; Mengelberg wanted instant composing. Breuker wanted more people admitted who would have equal voting rights; Mengelberg wanted the core three members to have final say. Both also had different takes on music theater, which all three got involved in during the late '60s. And so, both led their own gigs (although Mengelberg played markedly less often), with Bennink (who didn't choose sides) performing with both leaders, although more often with Mengelberg. Mengelberg and Breuker didn't record together after January 1969 until a recording session led by German pianist Alexander von Schlippenbach 20 years later.

But Breuker did a lot more during these pre-Kollektief years. He improvised with drummer Pierre Courbois (who, Breuker claimed, was the first to play "free" in Holland), who then introduced him to German musician Gunter Hampel. In 1966, Breuker composed a piece that addressed that summer's tumultuous political scene entitled Litany for the 14th of June, 1966, which won second place at Loosdrecht, and earned recognition for Breuker as one of the first in Holland to incorporate national politics into music. This composition was performed a couple more times before being recorded in September 1966 for Breuker's debut album, Contemporary Jazz for Holland/Litany for the 14th of June 1966. The first side of this album features a 17-piece band that included bassist (previously a guitarist) Arjen Gorter and Breuker's reeds teacher Ab van der Molen, while the second side is performed by a quintet including Mengelberg. That same month, Breuker performed on Boy Edgar's album Finch Eye, and a few months later, in December, he performed on Hampel's date for ESP, Assemblage/New Music from Europe, and again with Hampel in Alexander von Schlippenbach's first Globe Unity Orchestra, which also included saxophonist Peter Brötzmann at the time. Breuker, incidentally, would perform and record in Gunter Hampel's groups well into the '70s, and during one of these dates (July 1969), would meet and perform with American reedman Anthony Braxton. Breuker led a trio with Bennink and Altena (essentially, Mengelberg's quartet without Mengelberg) and performed in a trio with Brötzmann and Bennink in 1968. Breuker and Bennink were also part of Peter Brötzmann's landmark May 1968 recording, the still-shocking Machine Gun, on which Breuker played tenor sax and bass clarinet.

Throughout this time, he led occasional performances for radio and continued composing, including scores for film and theater. Some of the jazz musicians Breuker collaborated with, including Bennink, were less interested in repeat performances (rather necessary to theater), leading Breuker to work with more classical musicians during the late '60s. The more open-minded classical musicians were also necessary for some of his other compositional experiments, such as live performances using a timetable (that called for specific composers' works at specific times) instead of a score. He also toyed with a variety of instrumentations, as attested to by his works for 19 mandolins, a group including bagpipe, and his Lunch Concert for Three Barrel Organs (ICP 003). A two-LP set referred to as "the chocolate box" (due to its packaging) that documented some of Breuker's work from 1968-1970 was released on the ICP label, followed by The Message (ICP 009), written for a 1971 three-act "opera" by a mime troupe. The early '70s brought Breuker's official split with ICP, and early the following year he was recording with his Willem Breuker Orchestra. The Willem Breuker Kollektief took shape a couple of years later.

In 1970, Breuker and a few other musicians attended a meeting of the SJIN, the Dutch Jazz Foundation, an organization that received government funding for an orchestra and an annual prize, but not much else. The SJIN board was surprised to learn that these musicians wanted to make a living performing jazz full-time and wanted SJIN to plan accordingly. The unforeseen result was that much of the board resigned, leaving it in the musicians' hands. With the help of the remaining board members, the musicians wrote a proposal for a government jazz subsidy, which was accepted first by the city of Amsterdam and a year later by the national Ministry of Culture. Breuker was among the first musicians to receive the new stipend that began in the mid-'70s. In 1974, Breuker and trombonist Willem van Manen went before Amsterdam's arts council to request a place for the jazz musicians and improvisers to rehearse and perform in. This council was also surprised, and initially against the idea, but ultimately relented and promised some money. Breuker and a few others fronted money (until the check arrived) for the building that came to be called BIMHuis. They also spent the entire annual budget on just a few months' worth of programming. The city did pay what it had promised, soon followed by support from the Dutch government, and the next year brought a more reasonable increase in funding. The BIMHuis -- substantially renovated in 1984 and relocated to an impressive new building in 2005 -- has since become an internationally recognized venue for creative music, a unique space that still features challenging and intriguing music decades later.

Through his work in various groups, Breuker met pianist Leo Cuypers and the two musicians hit it off immediately. They formed a for-hire composing team, founded and co-owned the BVHaast label (until a falling out in 1980, after which it became Breuker's label), and recorded two duo albums -- the first, 1974's Live in Shaffy, was released on their label, while Superstars came out on the German FMP (Free Music Production) label in 1978. BVHaast would document Breuker's various film and theater music over the years as well as the music of his Kollektief.

The Willem Breuker Kollektief, usually consisting of about ten people, formed in 1974 and included many musicians who had collaborated with Breuker during his ICP days. WBK recorded their first album, and Breuker's first internationally distributed release, The European Scene (MPS Records), at a 1975 music festival and went on their first (and successful) North American tour two years later, giving Americans their first taste of Dutch jazz. WBK were often theatrical from the very beginning, and became known not only for their music, but for their entertaining and humorous performances. Over the decades, the group's lineup inevitably changed, but by the start of the next millennium, the Willem Breuker Kollektief still included original members bassist Arjen Gorter and trumpeter Boy Raaymakers. In over 30 years of performing around the world and at countless festivals, WBK recorded over 30 albums, mostly for BVHaast, and released several CD compilations of their work, including The Parrot and Celebrating 25 Years on the Road, a two-disc set and book that is a photographic retrospective of the band's performances. Having broken with free jazz by the time WBK were formed, Breuker moved even further from his beginnings by incorporating an increasing amount of other composers' works into WBK's repertoire. Over the years, the Kollektief recorded tributes to (or takes on) George Gershwin, Kurt Weill, Ferde Grofe, Ennio Morricone, and more.

In recognition of Breuker's outstanding contributions to Dutch music, he was awarded the Dutch National Jazz Prize in 1970 and the Jazz Prize of the West German Music Critics in 1976, received many commissions from the government (including Amsterdam's Musica '85 event, for which Breuker assembled a parade of 1,500 musicians and dancers), and was given the opportunity to create a permanent work of art in the town square of Middleburg in 1998. For this, Breuker placed a recording and score of his Hunger suite beneath a manhole cover engraved with "Time Is an Empty Bottle of Wine/Willem Breuker/1998." Willem Breuker died of lung cancer in Amsterdam on July 23, 2010; he was 65 years old. ~ Joslyn Layne, Rovi 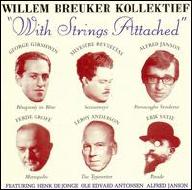 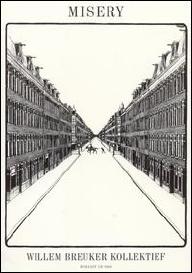 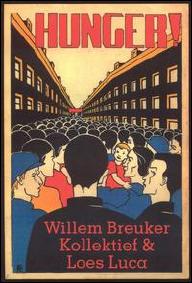 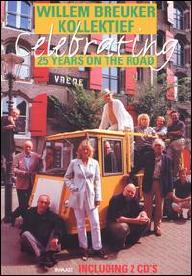 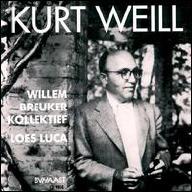 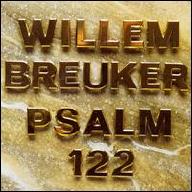 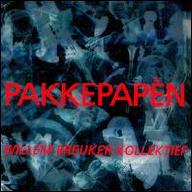 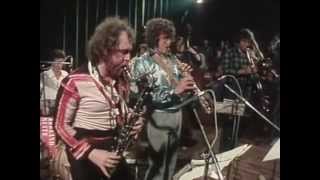 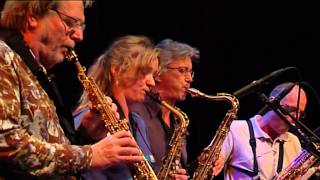 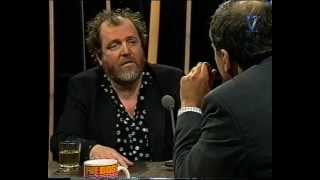 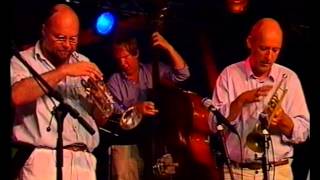 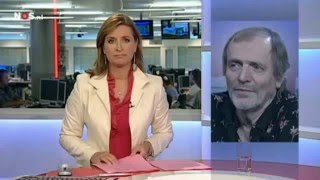 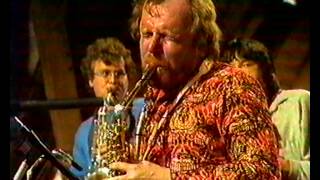 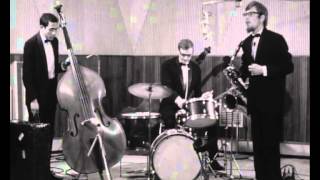