Close
Graham Parker
from Hackney, East London, England
November 18, 1950 (age 70)
Biography
Stereotyped early in his career as the quintessential angry young man, Graham Parker was one of the most celebrated singer/songwriters to emerge from England's pub rock scene in the early '70s. Drawing heavily from Van Morrison and the Rolling Stones, Parker developed a sinewy fusion of driving rock & roll and confessional folk-rock, highlighted by his indignant passion, biting sarcasm, and bristling anger. At the outset of his career, his albums crackled with pub rock energy, snide witticisms, and perceptive insights, earning him a devoted following of fans and critics, who lavished praise on his debut, 1976's Howlin' Wind, recorded with the Rumour, his backing band of pub rock all-stars. Despite all the positive word of mouth, Parker was saddled with a record label that wasn't sure what to do with him, and he was soon overshadowed by the emergence of Elvis Costello, a singer/songwriter who shared similar roots while enjoying greater success. After delivering Squeezing Out Sparks in 1979, which was a smash with critics and won him a larger audience in the United States, Parker courted a crossover career with solo projects such as 1982's Another Grey Area and 1985's Steady Nerves before settling into a cult following in the late '80s and continuing to garner critical acclaim as his music mellowed but his lyrical perspective stayed sharp. At the behest of filmmaker Judd Apatow, Parker reunited with the Rumour for his movie This Is 40, which led to concert tours and a pair of albums, 2012's Three Chords Good and 2015's Mystery Glue.

After spending much of his early adulthood working odd jobs, ranging from breeding mice and guinea pigs to working at a gas station, Parker began seriously pursuing a musical career in 1975. Until that time, he had played in a number of obscure pub rock groups, including a cover band that had spent time playing in Morocco and Gibraltar. But it wasn't until 1975 that he began shopping his demos. That year, Dave Robinson, one of the co-founders of the new independent label Stiff, heard one of Parker's demo tapes and encouraged the songwriter, helping him assemble a backing band called the Rumour. Robinson rounded up several stars of the pub rock scene -- guitarist Brinsley Schwarz and keyboardist Bob Andrews, both formerly of leading pub rockers Brinsley Schwarz, former Ducks Deluxe guitarist Martin Belmont, former Bontemps Roulez drummer Steve Goulding, and bassist Andrew Bodnar -- to form the Rumour, and the band was soon supporting Parker on the dying pub rock scene. With the assistance of DJ Charlie Gillett, the group landed a record contract with Mercury by the end of 1975.

Graham Parker the Rumour headed into the studio to cut their debut album with producer Nick Lowe, who gave the resulting record, Howlin' Wind, an appealingly ragged edge. Howlin' Wind was greeted with enthusiastic reviews upon its summer release, as was the similar Heat Treatment, which followed in the fall. Despite the positive press, Parker was growing frustrated with Mercury, believing that the company was not properly promoting and distributing his records. His third album, Stick to Me, had to be re-recorded quickly after the original tapes were discovered to be defective prior to its scheduled release. As a result, Stick to Me received mixed reviews upon its fall 1977 release, which derailed Parker's momentum slightly. Furthermore, Elvis Costello, a fellow pub rock survivor who possessed not only a more pop-oriented style of songwriting, but also a more dangerous persona, soon eclipsed Parker in popularity. Frustrated by his career hitting a standstill, Parker released the live-double album The Parkerilla in the summer of 1978 in order to get out of his contract. Following a short but intense bidding war, he quickly signed to Arista Records, where he released "Mercury Poisoning" -- a blistering attack on his former record label and the B-side of a promotional single -- as his first record for the label.

Squeezing Out Sparks, Parker's first album for Arista, put a halt to that decline. Sporting a slicker, new wave-oriented production -- it was the first of his records not to have any involvement from Nick Lowe -- the album was greeted with terrific reviews and, on the strengths of radio hits like "Local Girls," it became his most successful album, reaching number 40 on the American charts and selling over 200,000 copies. Parker was poised for a major breakthrough, but that didn't happen. He followed Squeezing Out Sparks in 1980 with the Jimmy Iovine-produced The Up Escalator, which was considerably slicker than its predecessor. The Up Escalator didn't sell, and Parker decided to ditch the Rumour, who had already begun a solo career. For 1982's Another Grey Area, he hired producer Jack Douglas and a team of session musicians, resulting in a radio-ready production that received mixed reviews, yet managed to peak at number 51. The Real Macaw, which followed in 1983, suffered a similar fate. For 1985's Steady Nerves, Parker moved to Elektra Records and formed a backing band called the Shot with guitarist Brinsley Schwarz, who helped him deliver his most radio-ready collection. This time, the pop move paid off. "Wake Up (Next to You)" became his only Top 40 hit, and the album stayed on the charts for nearly as long as Squeezing Out Sparks.

Despite his moderate commercial success with Steady Nerves, the album wasn't widely praised, and he also ran into trouble with Elektra, leaving the label after just one record. He briefly moved to Atlantic, which dropped him without releasing a single record. Consequently, Parker wasn't able to deliver another album until 1988, when he signed with RCA and released The Mona Lisa's Sister in the spring. Hailed as a comeback by several critics upon its release, the album generated a college radio hit with "Get Started (Start a Fire)" and spent 19 weeks on the charts. Instead of being the beginning of a comeback, the album turned out to be a last gasp: it was the last time Parker was able to crack the Top 100. Live! Alone in America (1989) received positive reviews but was ignored, and 1990's mild worldbeat experiment Human Soul received mixed reviews and peaked at number 165 on the charts. Parker's final album for RCA -- and his last album to chart -- was the stripped-down Struck by Lightning (1991), and while it was critically praised, it didn't find an audience outside of his cult. The following year, he switched to Capitol and released Burning Questions, which was ignored.

Following the release of 1993's double-disc anthology Passion Is No Ordinary Word, Parker made the leap to independent labels -- he had spent time at all but one of the major labels (Columbia/Sony) with little success. In 1994, he released the Christmas Cracker EP on Dakota Arts, and then he signed with Razor Tie, where he released 12 Haunted Episodes in the spring. Like The Mona Lisa's Sister and Struck by Lightning before it, 12 Haunted Episodes was hailed as a comeback, and it sold in respectable numbers for an indie release. Parker followed it with two albums in 1996, Live from New York, NY and Acid Bubblegum, which appeared within two months of each other late in the summer. Early in 1997, he released yet another live album, the double-disc The Last Rock N Roll Tour, which was recorded with the power pop quartet the Figgs. Parker continued to issue a steady stream of archive and live releases into the mid-2000s, and moved into singer/songwriter mode for the albums Deepcut to Nowhere and Your Country, the latter a roots rock-influenced affair released by the Chicago-based Bloodshot Records. The Figgs were back for 2005's Songs of No Consequence, an album that Parker declared "rocks like safari park chimp" in pre-release publicity. Unreleased material, rare edits, and remixes were featured on Official Art Vandelay Tapes, Vol. 2, which appeared two weeks after Songs of No Consequence. Don't Tell Columbus arrived in March 2007 and the clever Imaginary Television appeared in 2010, along with the DVD Live at the FTC.

Parker unexpectedly reunited his original backing band the Rumour in 2011, in part due to the intervention of longtime fan and filmmaker Judd Apatow, who made the group a plot point in his film This Is Forty. After appearing in the movie, the group recorded an album of new material, Three Chords Good, which arrived in November 2012, around the same time Apatow's movie was released. A concert shot for the film also received a stand-alone release on DVD and Blu-Ray under the title This Is Live. Parker and the Rumour took advantage of their new place in the spotlight by touring America and the UK in support of Three Chords Good, and in May 2015 they returned with another new LP, Mystery Glue, recorded during a six-day sprint at London's RAK Studios. The Rumour reunion came to an end, but their guitarist, Martin Belmont became part of the Goldtops, the ad hoc band that backed Parker on the 2018 release Cloud Symbols, which was rooted in the old band's pub rock sensibilities. ~ Stephen Thomas Erlewine, Rovi 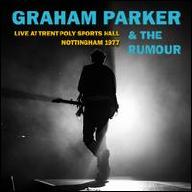 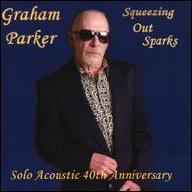 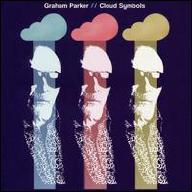 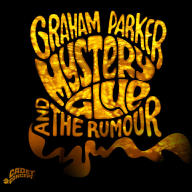 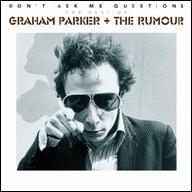 Don't Ask Me Questions: The Best of Graham Parker & the Rumour
2014 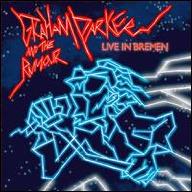 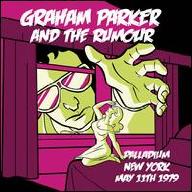 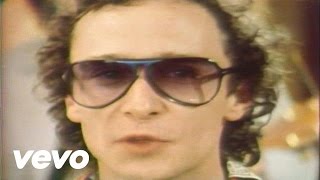 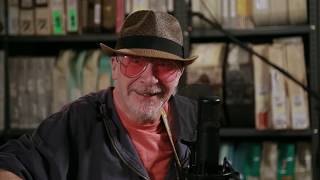 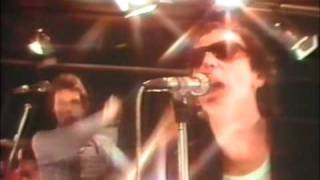 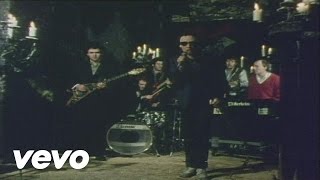 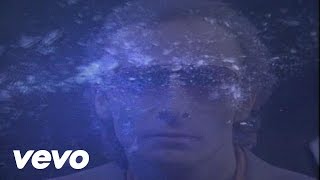 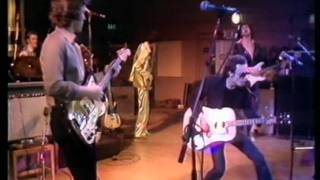 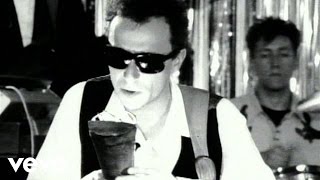