Close
Groucho Marx
from New York, NY
October 2, 1890 - August 19, 1977 (age 86)
Biography
As an entertainer and comedian, Groucho Marx remains a well-known figure some 30 years after his death. Marx's grease-paint bushy eyebrows and mustache, and trademark cigar, made him immediately recognizable, and he gained a reputation for smart ad-libs and cutting insults. While he came to fame on the stage and movie screen in the company of his brothers (the Marx Brothers), he also had a high-profile solo career, working in radio during the '30s and '40s, television during the '50 and '60s, and as a performer of one-man shows in the '70s.

Marx was born Julius Henry Marx in New York City on October 2, 1890. Although he dreamed of becoming a doctor, he dropped out of school at 12 to help support his family. In 1905, he began performing as a boy singer on the vaudeville stage, and later, with the help of his mother-manager, Minnie Marx, was joined by his brothers as the singing troupe the Four Nightingales. Later, the brothers developed into a successful comedy act, leading to several successful Broadway plays and, in the late '20s, movies like #Animal Crackers. Marx initially adapted a German accent for his stage persona, but quickly switched to a fast-talking smart aleck when anti-German sentiment became prevalent on the eve of WW I. The popularity of his persona also helped him establish a career outside of his work with his brothers during the early '30s.

Marx's first radio program was Flywheel, Shyster and Flywheel in 1932, a series co-starring Chico Marx. The series ran for only a short time, and while most of the transcripts and discs were believed destroyed, they were discovered in the Library of Congress in 1988 (as of March 2007, audio versions of the program are out of print). In 1947, Marx was invited to host the radio program You Bet Your Life for ABC, which was popular enough to transfer to television in 1950 (You Bet Your Life, Blockbusters, 2000). Between 1950 and 1956, the quiz show ran simultaneously on radio and television; after the radio broadcast was discontinued, the show ran for five more years on television (until 1961).

While Marx hosted the short-lived #Tell It to Groucho in the early '60s, and temporarily filled in on #The Tonight Show, his professional success during the '60s was sporadic. In 1968, Marx made his final film appearance as God in #Skidoo, a movie generally panned by reviewers. During the '70s, Marx made a comeback, performing one-man shows. He performed at Carnegie Hall in 1972 and AM issued An Evening with Groucho, a double album. Marx became a frequent guest on Dick Cavett's talk show, was photographed for -Rolling Stone with Alice Cooper, and guested on a variety show hosted by Bill Cosby. Marx won an honorary Oscar in 1974.

Marx died of pneumonia on August 19, 1977, only a few days after Elvis Presley, and was buried in Eden Memorial Park Cemetery in Mission Hills, Los Angeles, CA. Many of his recorded works, including dialog and songs from #Coconuts and #Monkey Business, remain available. ~ Ronnie D. Lankford, Jr., Rovi 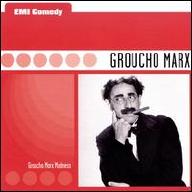 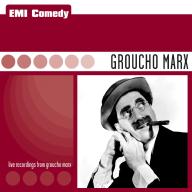 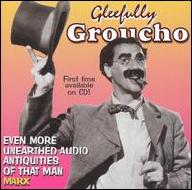 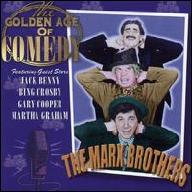 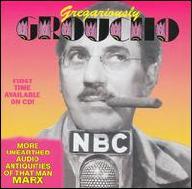 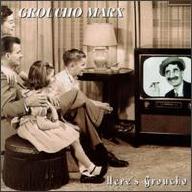 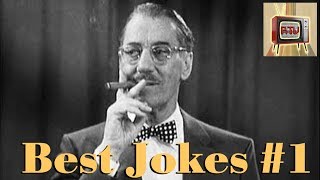 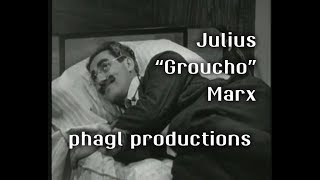 The Wonderful Insults of Groucho Marx 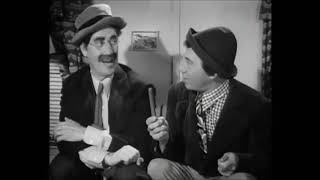 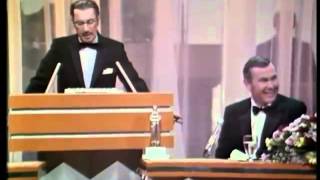 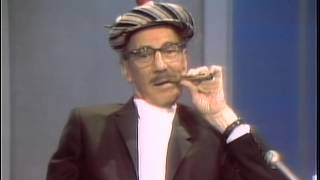 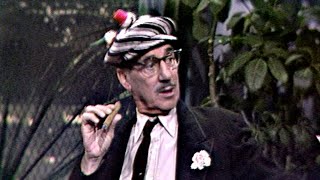 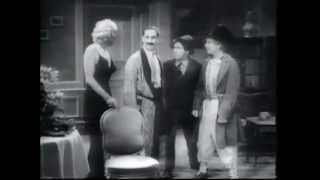 THE ONE THE ONLY GROUCHO
Available here: