Close
Kay Thompson
from St. Louis, MO
November 9, 1902 - July 2, 1998 (age 95)
Biography
Singer, songwriter, actress, pianist, vocal arranger, vocal coach, and children's book author Kay Thompson had an extensive and varied career that spanned concerts, radio, the legitimate stage, records, film, publishing, nightclubs, and television over three decades in the middle of the 20th century. Her amazing versatility allowed her to move back and forth between the performing spotlight and behind-the-scenes work, which meant that she never became famous for herself, although the beneficiaries of her efforts, including the actress/singer Judy Garland, the singer Andy Williams, and the fictional character Eloise, did.

Thompson was born Catherine Louise Fink on November 9, 1909 in St. Louis, MO; the day is not in question, although biographical accounts dispute the year, with a range from 1902 to 1913. (According to her birth certificate, 1909 is correct.) She had classical music training as a child and was considered a piano prodigy. At the age of 16, she appeared with the St. Louis Symphony, playing Liszt. She attended Washington University, and while an undergraduate sang on the radio station KNOX. She moved to California where, in 1929, she worked with the Mills Brothers. She appeared on the radio show #California Melodies and, on KTM in Santa Monica, on her own Kay Thompson show in 1931. In San Francisco, she took a job as a singer with bandleader Tom Coakley, with whom she made her recording debut in 1934 on the single Take a Number from One to Ten, released by RCA Victor Records. (The 2003 Thompson compilation The Queen of Swing Vocals Her Rhythm Singers included a previously unissued test pressing of My Galveston Gal, which she had made for Brunswick Records in 1933, her earliest extant recording.) She then relocated to New York, where she came to the attention of bandleader Fred Waring, who hired her to organize a ten-member female choir, and she appeared with him on the radio for a year starting in December 1934. On April 20, 1935, she was part of the cast on the first broadcast of #Your Hit Parade, and she continued to appear on the series for the next two years. Her other radio appearances during the mid-'30s included #Dodge All-Star Revue, #Chesterfield Dance Show with conductor André Kostelanetz, and #Saturday Night Swing Club.

On November 11, 1935, Thompson held a recording session for Brunswick, performing with a studio orchestra. The records, billed to Kay Thompson the Boys, were released in 1936, with You Let Me Down paired with You Hit the Spot, and Don't Mention Love to Me with Out of Sight, Out of Mind. In 1937, she appeared on the radio with bandleader Hal Kemp. On April 13, 1937, Kay Thompson Her Orchestra, as the billing had it, cut four sides for RCA Victor, Carelessly, There's a Lull in My Life, It Had to Be You, and Exactly Like You, and they were released on two singles later in the year. In November 1937, Kay Thompson Her Ensemble performed in the film #Manhattan Merry-Go-Round. Thompson's first Broadway credit came on December 1, 1937, when she and Hugh Martin served as the vocal arrangers for the musical +Hooray for What!, which opened that night. In 1938, she briefly had her own radio series, #Kay Thompson and Company, and as the '30s closed and the '40s began, she was appearing on another radio show, #Tune-Up Time. In 1941, she was the featured vocalist on several singles by Jack Hastings His Orchestra on the Viking label.

In 1942, Thompson switched gears, moving to Los Angeles and taking a job in the music department at MGM, where she replaced Hugh Martin, who had joined the army with the U.S. entry into World War II. She became closely associated with songwriter and producer Roger Edens, who was involved with musicals, especially those of Judy Garland. Thompson became Garland's vocal coach and worked extensively with the star on +The Harvey Girls (January 1946). The two can be heard singing a demo of In the Valley on Rhino Records' 1996 reissue of the soundtrack, and Thompson co-wrote with Ralph Blane extra lyrics to Harry Warren and Johnny Mercer's On the Atchison, Topeka and the Santa Fe. She also wrote The Interview (aka A Great Lady Has an Interview), a Garland segment in the anthology film #Ziegfeld Follies, which opened in March 1946. The same month, Thompson became the godmother to Garland's daughter, Liza Minnelli. Meanwhile, she also kept her hand in as a singer, cutting two singles, The Steam Is on the Beam and You're Mine, You, as the vocalist for Johnny Green His Orchestra on Decca Records in 1945.

Among Thompson's other contributions to MGM films of the mid-'40s, she co-wrote the lyrics to Vive l'Amour in #Thrill of a Romance (May 1945) with Ralph Blane and Georgie Stoll; appeared in a small part in #The Kid from Brooklyn (March 1946); wrote the song Isn't It Wonderful, and co-wrote Love on a Greyhound Bus with Blane and Stoll for #No Leave, No Love (August 1946) (the song was recorded by bandleaders Guy Lombardo, Kay Kyser, and Vaughn Monroe, and by the Dinning Sisters); wrote satiric musical commercials heard in #The Hucksters (July 1947); and, with Edens, added material to the songs Good News, He's a Ladies' Man, and Varsity Drag for #Good News (December 1947). She left MGM in 1947 to return to performing, teaming with the young quartet the Williams Brothers (including a teenage Andy Williams) in a nightclub act. They cut two singles, Back Home in Indiana backed with Jubilee (a Thompson composition), and I See Your Face Before Me/Louisiana Purchase for Columbia Records. (In each case, Thompson sang the first song solo and was joined by the group on the second.) Both discs were released in 1948. Moving to Decca, Thompson cut another couple of singles, her own composition 'Bout You 'n' Me backed with Frank Loesser's (Where Are You?) Now That I Need You (1949) and That Old Feeling/Was That the Human Thing to Do (1950). The tiny Allied Record Sales Company issued the single On the Caribbean/Old Fashioned Hammock (both Thompson compositions) in April 1953. Meanwhile, the act played major clubs around the U.S. and in London.

Thompson continued to work in film occasionally in the early '50s, co-writing the song More Wonderful Than These with her second husband, radio director/producer William Spier, for 1951's #Lady Possessed. (By then, he was actually her second ex-husband. In the '30s, she had been married to trombonist Jack Jenney, with whom she wrote the song What More Can I Give You? That marriage, too, ended in divorce.) After the Williams Brothers broke up in 1953, she launched a solo nightclub act with an engagement at the Plaza Hotel in New York. In 1954, she recorded a solo album for MGM Records, Kay Thompson Sings; it was released in January 1955. (Among its selections was the Thompson composition Violins, aka Violin and I Love a Violin. The song has been recorded by Teresa Brewer, Petula Clark, Dorothy Collins, Michael Feinstein, Liza Minnelli, and Dinah Shore.)

In November 1955, Thompson published -Kay Thompson's Eloise (illustrated by Hilary Knight), the first of four children's books about a six-year-old who lives at the Plaza Hotel. Although the books were something of a sidebar to her main musical writing and performing career, they became her best-known efforts. Soon, in fact, an opportunity came to exploit the character in other media. Naturally, Thompson wrote a song called Eloise with Robert Wells, and she recorded a single of it for Cadence Records that became her only Top 40 hit in March 1956. And on November 22, 1956, the television series #Playhouse 90 broadcast a TV musical called #Eloise, featuring Thompson (and songs she had written) along with Ethel Barrymore and Louis Jourdan. A less visible contribution was one she made to Broadway around this time. The musical +Happy Hunting had opened unhappily on December 6, 1956, despite having Ethel Merman as its star, in part because of the inferior score by Harold Karr and Matt Dubey. After the opening, Thompson quietly added two new songs to bolster it, I'm Old Enough to Know Better (And Young Enough Not to Care) and Just a Moment Ago, and the show settled in for a modestly successful run. A far more public effort for Thompson shortly afterward was her appearance in her biggest screen role ever, playing the part of a magazine editor in the movie musical #Funny Face (March 1957), with Fred Astaire and Audrey Hepburn. She performed four songs, Think Pink!, Bonjour, Paris!, Clap Yo' Hands, and On How to Be Lovely, both in the film and on the soundtrack album released by Verve Records. Verve also had her cut a separate single, Bazazz/Light Up the Candle on the Birthday Cake. ("Bazazz" is a word coined and frequently used by the character she played in #Funny Face.) On October 15, 1957, she starred in her own television special. In 1959, the Hanover-Signature label released a spoken word comedy album, Kay Thompson Party, Vol. 1: Let's Talk About Russia, and a single, with both songs co-written by Thompson and Dick Grossman, Dasvidanya (Until We Meet Again)/Moscow Cha Cha Cha.

In the late '50s, as her career as a performer wound down, Thompson turned more to songwriting. You Gotta Love Everybody, which she wrote with Bill Norvas, was recorded by Della Reese, and Promise Me, Love, which she wrote alone, was recorded by Andy Williams and peaked in the Top 20 in the fall of 1958. Indeed, the former Williams Brothers member made it a habit to record Thompson songs in the late '50s and early '60s. Stop Teasin' Me and Straight from My Heart had appeared on his 1957 debut album, Andy Williams, and after the success of Promise Me, Love, Williams put Thompson's Summer Love on Lonely Street (1959), Sweet Morning on The Village of St. Bernadette (1960), Au Revoir, Paris on Under Paris Skies (1961), and Kay Thompson's Jingle Bells (an adaptation of the traditional carol with additional music and lyrics) and The Holiday Season (in a medley with Irving Berlin's Happy Holiday) on The Andy Williams Christmas Album (1963). (The Osmonds and Michael W. Smith have also recorded Kay Thompson's Jingle Bells, while The Holiday Season has also been recorded by the Manhattan Transfer and by Tonic.)

Thompson was not active musically after the early '60s beyond a few television appearances, although she briefly returned to acting, appearing with her goddaughter Liza Minnelli in the 1970 film #Tell Me You Love Me, Junie Moon. The same year, she published a new children's book, -Kay Thompson's Miss Pooky Peckinpaugh and Her Secret Private Boyfriends Complete with Telephone Numbers. She spent the last years of her life living with Minnelli in an apartment in Manhattan, dying on July 2, 1998, at age 88. In 2008, Minnelli re-created Thompson's nightclub act with the Williams Brothers as part of her own show performed at the Palace Theater on Broadway. Thompson's recordings, scattered across many labels, were available only on a hard-to-find LP, The Kay Thompson Reviews, and then on a hard-to-find CD, The Golden Years 1934-1954, until the release of The Queen of Swing Vocals Her Rhythm Singers by Baldwin Street Music, which covered only the years 1933 to 1937. In 2009, with the advantage of the 50-year copyright limit on recordings in Europe, the British reissue label Sepia released the three-CD set Think Pink! A Kay Thompson Party, which picked up from where the Baldwin Street album had left off and included more than two dozen previously unreleased tracks culled from airchecks and private recordings. It was assembled by Thompson's biographer, Sam Irvin. Irvin also figured prominently in the documentary film #Kay Thompson: "Think Pink," included in a 2009 deluxe two-DVD edition of #Funny Face. ~ William Ruhlmann, Rovi 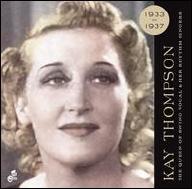 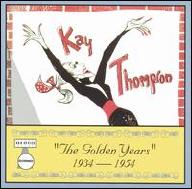 Dasvidanya [Until We Meet Again]
1959 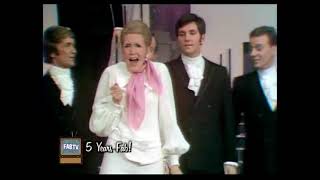 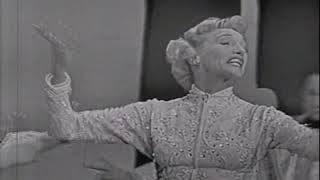 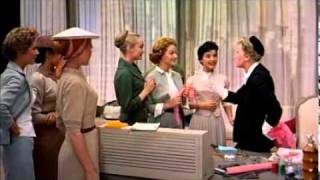 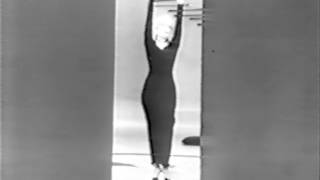 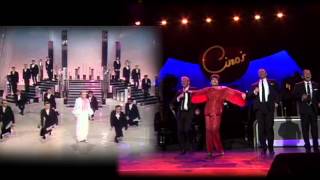 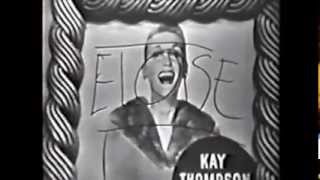 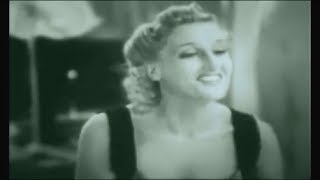