Close
Handel & Haydn Society
from Boston, MA
formed January 1, 1815 (age 207)
Biography
Boston's Handel Haydn Society (colloquially HH) has been fundamental to the development of classical music in the U.S. since its founding in 1815. It has been continuously operating longer than any other performing arts organization in the country. The group was organized by a committee of prosperous Boston businessmen, whose professional contingent gradually expanded; many of the first members were tradespeople who were members of local church choirs. As the name implies, the group is devoted to performances of 18th century music, but it also performs large chorus-and-orchestra works that appeared in the 19th century. An early president of the group was piano manufacturer Jonas Chickering; a notable 19th century member was Battle Hymn of the Republic composer Julia Ward Howe. The Handel Haydn Society gave the American premieres of Handel's Messiah in 1818, Haydn's Creation the following year, Verdi's Requiem in 1878, and Bach's St. Matthew Passion in 1879. An oratorio was apparently commissioned from Beethoven in the mid-1820s, but it was never finished. The group has given more than 2,000 performances since its founding.

In addition to well-loved annual performances of famous works (Messiah has been presented annually since 1854), the Society marked important events, such as the end of the Civil War, with concerts and festivals. In the 20th century, the membership, comprising singers and orchestral players, expanded, reaching well over 200 musicians before contracting somewhat during the Depression and World War II. As the historical performance movement developed in the mid-20th century, the Handel Haydn Society generally ignored it and took criticism for doing so. Thomas Dunn, music director from 1967 to 1986, began to develop the group's responses to historical performance, developing it into a fully professional group and broadening the repertory to include the entire period from the Renaissance to the present. These trends continued under Christopher Hogwood (1986-2001), the Society's first non-American director, Grant Llewellyn (2001-2006), and especially Harry Christophers (2009-2022), also director of the popular choir the Sixteen.

Under Christophers, the Handel Haydn Society began a recording career commensurate with its prestige; it has issued recordings annually on the Sixteen's Coro label, including not only choral works but a series of albums devoted to the instrumental music of Haydn. In 2018, the group issued two albums, each containing music by Haydn and Mozart. The following year, it was announced that Christophers would step down as director following the 2020-2021 season; however, this was pushed back a season due to the coronavirus shutdowns of that concert season. In 2021, the Handel Haydn Society was heard on an album of Mozart's Violin Concertos, led from the violin by the group's concertmaster and soloist, Aisslinn Nosky. ~ James Manheim, Rovi 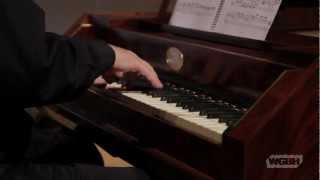 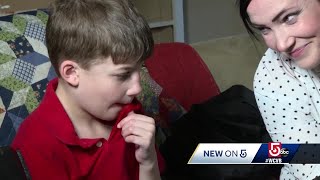 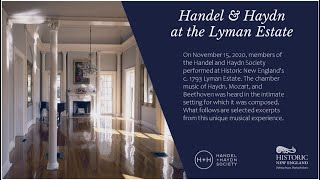 Handel and Haydn Society Performance at the Lyman Estate 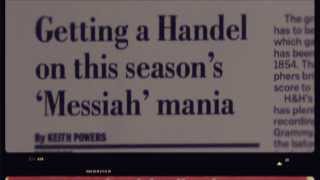 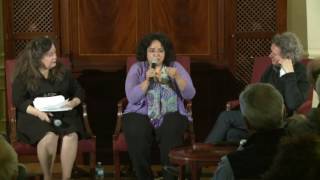 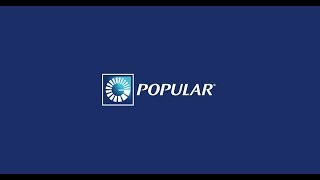