Close
Barry Harris
from Detroit, MI
December 15, 1929 (age 90)
Biography
Barry Harris is an award-winning, influential pianist, composer, and instructor, an NEA Jazz Master, and a member of the American Jazz Hall of Fame. He is critically regarded as one of the major hard bop stylists to emerge from the second half of the 20th century. His fleet-fingered style and rich, complex chording architecture and harmonic system have been captured on dozens of recordings as a leader and sideman. He has taught his playing techniques at many music schools and institutions across the globe, including the Royal Conservatory of Music at The Hague -- his classes were videotaped (with permission) by the late pianist Frans Elsen and distributed by YouTube in 2008. Harris' bop influences run the stylistic spectrum: he has the ability to sound like Bud Powell, yet can play convincing impressions of Thelonious Monk, all while possessing a bright, intrinsically swinging, colorful style within the bop/hard bop idioms. He was an important part of Detroit's jazz scene during the '50s, where he worked with visiting masters such as Charlie Parker, Miles Davis, Hank Mobley, Dizzy Gillespie, and hometown associates Donald Byrd, Wild Bill Davidson, and Thad Jones. He has also been a jazz educator since that time. Harris' first set as a leader was 1960's At the Jazz Workshop for Riverside with Louis Hayes and Sam Jones. He moved to New York the same year and spent a short period playing with the Cannonball Adderley Quintet and as a sideman on recordings by Harold Land, Sonny Stitt, Louis Hayes, and Don Wilkerson. Harris truly arrived as a leader in 1961 and issued three recordings during the year: Listen to Barry Harris, the trio offering Preminado with Elvin Jones and Joe Benjamin, and the quintet offering Newer Than New with Charles McPherson, Lonnie Hillyer, Ernie Farrow, and Clifford Jarvis. His recording and playing relationship with Yusef Lateef (who had also relocated to N.Y.C. from Detroit) began formally in 1961 on the latter's Into Something and Eastern Sounds. Also during the '60s, Harris recorded and shared bandstands with Dexter Gordon, Illinois Jacquet, Mobley, Lee Morgan (that's his piano on The Sidewinder) and Coleman Hawkins. During the '70s, Harris was on two of Stitt's finest records (Tune Up and Constellation), roomed with Monk at jazz patron Pannonica de Koenigswarter's house, and cut several recordings under his own name in a variety of settings for Xanadu -- though 1975's Vicissitudes was cut for MPS. Harris has mostly worked solo and with various trios since the mid-'70s, recording as a leader for a variety of labels including Uptown, Red Records, Concord, Koch Jazz, and more. In 1982 he founded Manhattan’s Jazz Cultural Theatre, a performance venue featuring famed jazz musicians, jam sessions, and music classes for several generations of musicians until it closed in 1987. In the 21st century, Harris continues to play live and teach courses in jazz theory, piano, and voice at several schools and institutions in the New York area while delivering master classes and lectures throughout the world.

Harris was born ten days before Christmas in Detroit in 1929. His piano studies began at age four with his mother (a church pianist), who gave him the choice of classical music or jazz. He is part of an exceptional crew of Detroit-bred jazz musicians including Tommy Flanagan, Alice Coltrane, Pepper Adams, and Donald Byrd, who rose through the Motor City's extraordinary public school arts education programs during the '30s and '40s. The pianist devoted himself to bebop in the '40s after seeing Charlie Parker play a concert in Detroit. While learning his chops, Harris initiated his own career, playing high school dances and various other functions around Detroit. During parts of 1953 and 1954, he worked as the house pianist at the Bluebird Lounge and Baker's Keyboard Lounge, Motor City jazz meccas on the city's west side. There Harris also backed visiting musicians such as Davis, Stitt, and Thad Jones. He subbed for Junior Mance in Gene Ammons' group during a multi-week stand in Detroit, and briefly toured with Max Roach after the group's resident pianist Richie Powell (younger brother of Bud) was killed in an auto accident.

In 1960, Harris migrated to New York following Flanagan and Byrd, where he got work playing with Adderley, Hawkins, and other musicians including Wes Montgomery (on Go!), Morgan, Mobley, Lateef, Carmell Jones, and his former student McPherson. He met de Koenigswarter -- the British scion of the Rothschild dynasty and patroness of the New York jazz scene -- who befriended him and introduced him to Monk, whom he roomed with at her house in Weehawken, New Jersey. During 1974, he sat in for Monk at the New York Jazz Repertory Company. Meanwhile, Harris' trio toured the globe; they played elite clubs in New York and performed at concert halls in Europe and Japan. In 1970, Harris and trio (bassist Ron Carter and drummer Leroy Williams) released Magnificent!, his final album of new material for Prestige. But the pianist was an in-demand sessionman and spent the first half of the decade working on albums (and to a lesser degree, stages) with Red Rodney, Sonny Criss, Johnny Griffin, and Illinois Jacquet. In 1975 alone, he played on a dozen recordings including his own Vicissitudes and his debut for the Xanadu label, Barry Harris Plays Tadd Dameron. He also played on three other recordings for the label that year including Jimmy Heath's Picture of Heath, Al Cohn's Play It Now, and Sam Noto's Entrance! In 1976, he released the trio date Live in Tokyo, compiled from two evenings of performances and also did session work. In 1977, he was part of one of the all-star jam session recordings Xanadu is famous for: True Blue included Cohn, Dexter Gordon, Louis Hayes, Sam Jones, Billy Mitchell, and Noto. Harris also played on saxophonist Billy Mitchell's Colossus of Detroit and Gordon's Biting the Apple (Steeplechase). 1978 proved another milestone year for the pianist. He released Barry Harris Plays Barry Harris for Xanadu, and was part of the Detroit Four for Cadillac and Mack with drummer Roy Brooks, bassist Vishnu Wood, and trombonist Charles Greenlee, and played on seven other recordings. In 1979, he did the Montreux review-style tours for Xanadu (that resulted in three recorded volumes), issued his own Tokyo: 1976 with his quintet, and spent the next couple of years playing at home in New York as a sideman. During the '70s, Harris began teaching in formal settings with Jazz Interactions, a non-profit organization run by Joe and Rigmore Newman. It proved a doorway to a second vocation that he continues to enjoy.

Harris' last date for Xanadu was 1982's The Bird of Red and Gold. He also founded Manhattan's Jazz Cultural Theatre that year and was its chief instructor. While he did intermittent session work (and contributed to the soundtrack for the Clint Eastwood film Bird), the JCT took up most of his time; the only leader date he issued in the rest of the decade was For the Moment with Williams and bassist Rufus Reid for Uptown Records. JCT closed in 1987 and Harris went back on the road as well doing session work. He also appeared in the 1989, Eastwood produced documentary film, Thelonious Monk: Straight, No Chaser.

In 1990, he played on saxophonist Buck Hill's Muse debut Capital Hill, and the following year on Steve Grossman's Do It. His Live at Maybeck Recital Hall, Vol. 12 appeared from Concord. The following year Harris released the live In Spain for Nuba Records; he was also one of the pianists Frank Morgan recruited for the duets collection You Must Believe in Spring. He toured with Diana Ross in 1992 as well, and was a major part of her recording Stolen Moments: The Lady Sings...Jazz and Blues, an audio and visual package. In 1995, he issued Live at DUG, documenting a club date in Japan, and played on Lee Konitz's Lullabye of Birdland and Backyard by Roni Ben-Hur with the Barry Harris Trio for TCB. With Williams and bassist George Mraz, the pianist issued First Time Ever for Evidence in 1997.

All the while teaching and conducting workshops in cities across the United States was a passion project. Harris charged inexpensive rates while sharing his knowledge and passion for the jazz idiom with amateurs and seasoned professionals of all ages. In 2000, Venus Records released his trio offering, The Last Time I Saw Paris, with Williams and Mraz. While Harris spent most of his time teaching, he did find time to issue the video Spirit of Bebop in 2005 that blended interview excerpts with performances and historic film and video footage. The same year his Post Master Class Concert was released by the Netherlands' Blue Jack Jazz Records. After the Royal Conservatory of Music at The Hague workshops and videos, Harris was a mainstay in Europe. In 2010, Live in Rennes, from the previous year's Jazz à l’Ouest Festival, appeared from Plus Loin Music. Harris didn't simply teach but was a student himself: he studied classical piano with Sofia Rossof until her death in 2017, and he continues to teach his own master classes and administer workshops across the globe. ~ Thom Jurek, Rovi 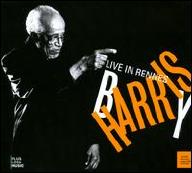 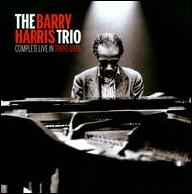 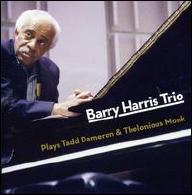 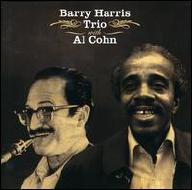 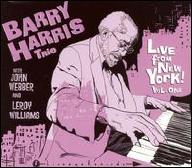 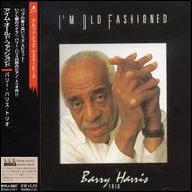 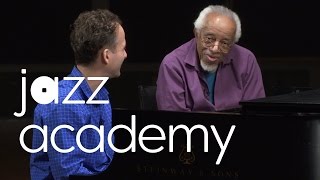 Barry Harris - All the Best (FULL ALBUM - BEST OF BEBOP) 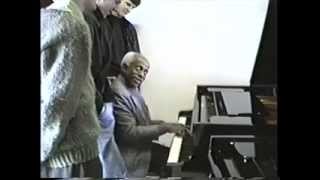 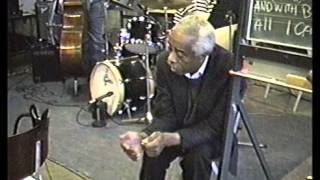 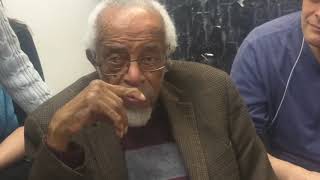 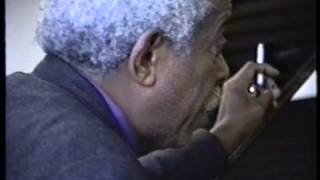 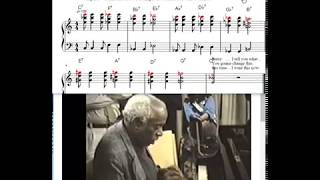