Close
Radamés Gnattali
from Puerto Alegre
January 27, 1906 - January 13, 1988 (age 81)
Biography
Radamés Gnattali is a fundamental name in Brazilian music. A classically trained composer, conductor, orchestrator, and arranger, he worked for a living in the popular side of the business, deeply influencing Brazilian popular music with his arrangements and conceptions through his omnipresence at the musical direction of Rádio Nacional, the biggest broadcast outing in Brazil during that time. His compositions, both in the erudite and popular fields, concurred to bridge the gap between the two idioms, a self-imposed task that was always kept in sight throughout his whole life.

Both his father and mother were musicians and he started his musical apprenticeship with his mother at age six; later he also took the violin, with his cousin Olga Fossati. At nine, he was decorated by the Italian consul after conducting a child orchestra with his own arrangements. At 14, he was already playing cavaquinho and violão and began his studies with Guilherme Fontainha. In the same year, he was examined by the Escola de Belas Artes de Porto Alegre and was admitted at once to the fifth grade. At 16, he was employed at the Cine Colombo, accompanying silent movies. His desire was to be a concerto pianist, but his parents didn't have the means to provide for his training and he had to work in dances and take in pupils. In 1923, he finished his studies with honors and decided to go to Rio. His professor, Fontainha, used all his prestige to appoint a concert by Gnattali on July 31, 1924, at the Instituto Nacional de Música. In front of a selected audience composed of journalists, musicians, critics, and authorities, he disencumbered himself from the task with greatness that registered with the critics from the period. Soon he met Ernesto Nazareth, who played at the Cinema Odeon, and he then became a frequenter of Galeria Cruzeiro, a piano seller that employed Nazareth as a sheet music demonstrator. After a while, Nazareth asked Gnattali to play for him, receiving enthusiastic applause. Mário de Andrade, a respected musicologist, was, at the time, director of the Conservatório Dramático Musical de São Paulo and invited Gnattali for a performance there.

He returned to Porto Alegre and continued to teach while performing extensively with the Quarteto Henrique Oswald, where he exercised and experimented his string quartet skills as the basis for his firm grasp on the symphonic orchestral writing. In 1929, Fontainha scheduled him again to play in Rio. This time, he played at the biggest pantheon of classical music in Rio, the Teatro Municipal, where he was backed by the Orquestra Sinfônica do Teatro Municipal, conducted by Francisco Braga. In that period, he already had a great number of compositions, both erudite and popular. In 1931, he participated in the IV Concert of the Instituto Nacional de Música's Official Series sided by such composers as Luciano Gallet, Heitor Villa-Lobos, and Lorenzo Fernandez. In the next year, already married, he embraced popular music for a living and was employed by the orchestras of Romeu Silva and Simon Bountman, playing at Carnival balls, operettas, dance parties, and radio shows. In those times, there were virtually no Brazilian arrangements. He began to write arrangements for Brazilian music almost at the same time as Pixinguinha, soon becoming famous for that. Next, he went to Lambari, Minas Gerais, then an elegant watering place, to sub for pianist Mário Martins at the Cassino das Fontes. In that period, he got a job that would profoundly affect his life, at the Rádio Clube do Brasil. In 1932, he become a session arranger and pianist for Victor, debuting there in the recording business with his choros Espritado and Urbano under the pseudonym Vero (adopted in all his popular pieces). As a pianist, he accompanied Bidu Sayão in 1934, the same year his Concerto No. 1 para Piano e Orquestra was conducted by Henrique Spedini, having the very Gnattali as soloist.

In that decade, he also worked for Rádios Mayrink Veiga, Gazeta, Cajuti, and Transmissora. Orlando Silva, the precursor of the colloquial way of singing later re-utilized by João Gilberto and the first to record Brazilian music with a symphonic orchestra, asked Gnattali to write arrangements for him. The association produced top-selling results, while the critics deplored the "American chord," as they referred to the ninth chord. At this point, it is important to quote Gnattali himself to solve a lot of confusion surrounding Brazilian music, including the so-called bossa nova. "If the ninth chord was also used in jazz, it was because the jazz composers also listened to Ravel and Debussy."

In 1938, he presented other erudite compositions at the Escola Nacional de Música and in the next year was invited to the New York World's Fair, together with the popular composers Pixinguinha, Donga, and João da Baiana, and the erudites Heitor Villa-Lobos, Francisco Mignone, Lorenzo Fernandez, and Camargo Guarnieri. Also in 1939, Ary Barroso presented his show Joujoux et Balangandans at the Teatro Municipal, with the Rádio Mayrink Veiga and Rádio Nacional's orchestras, conducted by Gnattali. The enormously successful, almost unofficial anthem Aquarela do Brasil, was modified by Gnattali, which put five saxes playing the counter theme in seconds, originating the all-time classic introduction.

In 1938, Rádio Nacional was created. Initially a modest enterprise, from the very first moment it counted on Gnattali. But in 1940, the radio was expropriated by the Estado Novo, as was known the nationalist dictatorship by Getúlio Vargas. In line with the government's ideals, the radio changed its profile to represent an important asset in the cultural propaganda, which was based on the best production of the country. In those times, there weren't Brazilian music orchestras, only small groups (regionais) and salon dance orchestras. Then, in 1943, the Orquestra Brasileira Radamés Gnattali was created, together with the show Um Milhão de Melodias, which remained active for 13 years. It was a show that presented music from the entire world, but with appropriate Brazilian dressings through arrangements by Gnattali that were executed by the orchestra. At that time, Gnattali used to write nine full-scored orchestrations per week. That show was the first to pay tribute to Ernesto Nazareth, Chiquinha Gonzaga, and Zequinha de Abreu. Under the influence of his friend, drummer Luciano Perrone, Gnattali also changed the way of orchestrating Brazilian rhythms. At that time, the strings, woods, and reeds took charge of the harmonic/melodic conduction, and the rhythms were exposed by percussion. On the orchestra's recorded albums for RCA, there were plenty of rhythmists, but the regular broadcasts counted only with Luciano, who, feeling himself too weak to supply all the rhythmic richness of several percussionists, asked Gnattali to write some of the rhythms to be delivered by the orchestra. In 1941, the show Instantâneos Sonoros was simultaneously broadcast to Argentina, where it was a success, making Gnattali officially decorated in that country. Returning to Brazil, he was also awarded with the Prêmio Roquette Pinto. In 1946, London's BBC purchased the recording rights for Brasiliana No. 1 for a large sum. At the request of the Chicago and Philadelphia symphonic orchestras, Arnaldo Estrela performed Concerto para Piano e Orquestra. In 1949, while working for the Continental label, he created the Quarteto Continental (soon transformed to a sextet), which toured Europe in the III Caravana Oficial da Música Popular Brasileira, in 1960. In 1953, he presented at the Teatro Municipal his Concertino para Violão e Orquestra, conducted by Eleazar de Carvalho. The concertino had been written especially for the great violonista Garoto, who was the soloist. It was the first time in which the violão, an instrument related to low-life sambistas and malandros, climbed such a respectable stage (with the possible exception of a prior Segovia concert there). In 1954. he composed the Suíte da Dança Popular Brasileira for electric guitar and piano, dedicated to Laurindo Almeida and executed by Garoto in São Paulo. In the same year, he opened the show When the Maestros Meet Each Other, where Tom Jobim presented himself. Jobim accounted later that he, a novice then, was extremely nervous to be there conducting in front of longtime venerated maestros, but Gnattali, at the piano, was friendly and helped him with some cues. In 1958, during the Festival Radamés Gnattali at the Teatro Municipal, he presented his Concerto para Harmônica de Boca e Orquestra, with soloist harmonica player Edu da Gaita. That same year, Gnattali composed the Concerto para Acordeão (accordion) e Orquestra, written for Chiquinho do Acordeon. In 1964, Gnattali formed a duo with Iberê Gomes Grosso (violoncello) and toured Europe. The next year, he presented the Concerto Carioca No. 1. In 1968, Gnattali was hired by Rede Globo, where he worked as a composer/orchestrator for 11 years. He also composed the soundtracks for several movies, including #Bonitinha mas Ordinária, #Eles Não Usam Black-Tie, #Perdoa-me por me Traíres, and others. In 1983, he received the Prêmio Shell as an erudite artist in a ceremony at the Teatro Municipal, an occasion when he presented his Concerto Seresteiro No. 3 for piano, orchestra, and "regional" (Camerata Carioca). He continued his extremely active career until he had a stroke a year before his death. ~ Alvaro Neder, Rovi 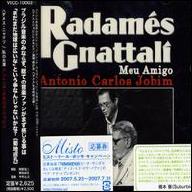 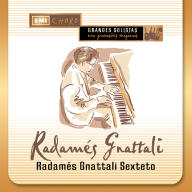 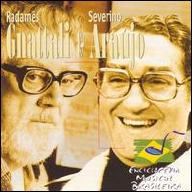 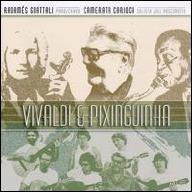 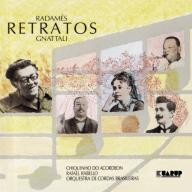 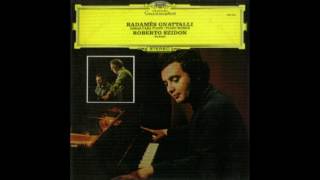 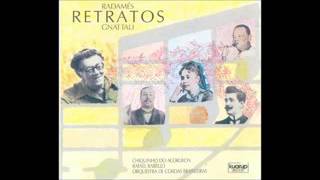 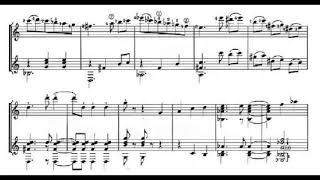 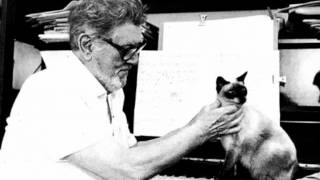 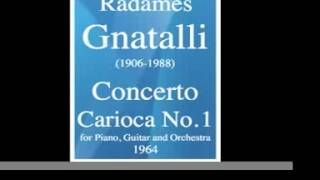 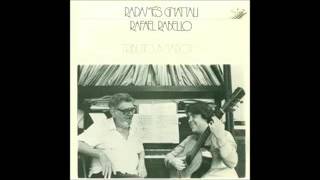 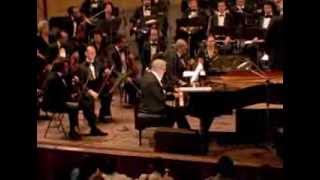