Close
Tommy Dorsey
from Shenandoah, PA
November 19, 1905 - November 26, 1956 (age 51)
Biography
Though he might have been ranked second at any given moment to Benny Goodman, Artie Shaw, Glenn Miller, or Harry James, Tommy Dorsey was overall the most popular bandleader of the swing era that lasted from 1935 to 1945. His remarkably melodic trombone playing was the signature sound of his orchestra, but he successfully straddled the hot and sweet styles of swing with a mix of ballads and novelty songs. He provided showcases to vocalists like Frank Sinatra, Dick Haymes, and Jo Stafford, and he employed inventive arrangers such as Sy Oliver and Bill Finegan. He was the biggest-selling artist in the history of RCA Victor Records, one of the major labels, until the arrival of Elvis Presley, who was first given national exposure on the 1950s television show he hosted with his brother Jimmy.

Dorsey was 21 months younger than Jimmy and thus the second son of Thomas Francis Dorsey, Sr., a music teacher and band director, and Theresa Langton Dorsey. Both brothers received musical instruction from their father. Tommy focused on the trombone, though he also played trumpet, especially early in his career. The brothers played in local groups, then formed their own band, Dorsey's Novelty Six, in 1920. By 1922, when they played an engagement at a Baltimore amusement park and made their radio debut, they were calling the group Dorsey's Wild Canaries. During the early and mid-'20s, they played in a series of bands including the Scranton Sirens, the California Ramblers, and orchestras led by Jean Goldkette and Paul Whiteman, sometimes apart, but usually together. Eventually, they settled in New York and worked as session musicians. In 1927, they began recording as the Dorsey Brothers Orchestra for OKeh Records, using pickup bands, and they first reached the charts with Coquette in June 1928. In the spring of 1929, they scored a Top Ten hit with Let's Do It (Let's Fall in Love), which featured Bing Crosby on vocals.

The Dorseys finally organized a full-time band and signed to Decca Records in 1934. Hiring Bing Crosby's younger brother Bob Crosby as their vocalist, they scored a Top Ten hit with I Believe in Miracles in the late winter of 1935, quickly followed by Tiny Little Fingerprints (vocal by Kay Weber) and Night Wind (vocal by Bob Crosby). They then enjoyed successive number one hits with Lullaby of Broadway (vocal by Bob Crosby) and Chasing Shadows (vocal by Bob Eberly, Bob Crosby's replacement). The Dorsey Brothers Orchestra was poised to become the biggest band in the country in the spring of 1935 and might have been remembered for launching the swing era, but at the end of May the brothers, whose relationship was always volatile, disagreed, and Tommy left the band (which nevertheless scored another Top Ten hit with Every Little Movement that summer). Jimmy Dorsey continued to lead the band, which eventually was billed as Jimmy Dorsey and His Orchestra and went on to considerable success. But while the Dorseys stumbled, Benny Goodman achieved national success and was dubbed "the King of Swing."

Notwithstanding his commercial success, Dorsey made important changes in his band in late 1939, particularly in his vocalists. Jack Leonard left the band in November, and Dorsey hired Frank Sinatra away from Harry James. Longtime female singer Edythe Wright also departed, replaced by Connie Haines, and the vocal quartet the Pied Pipers, featuring Jo Stafford, also joined Dorsey. The success only continued with the new members. Dorsey scored ten Top Ten hits in 1940, among them the chart-toppers Indian Summer and All the Things You Are (both with vocals by Leonard) as well as I'll Never Smile Again (with vocals by Sinatra and the Pied Pipers). For the year, he ranked second behind Glenn Miller as the top recording artist. He dropped to third place behind Miller and his brother Jimmy in 1941, a year in which he scored another ten Top Ten hits, eight of them featuring Sinatra, including the number one hit Dolores from the film Las Vegas Nights, released in March, in which the band appeared.

The year 1942 was a challenging one for Dorsey. The U.S. had entered World War II in December 1941, which put pressure on the big bands particularly in terms of changing personnel and travel difficulties. On August 1, 1942, the American Federation of Musicians called a strike that prevented musicians from entering recording studios. Frank Sinatra left the band in September to launch a solo career, and the Pied Pipers were gone by the end of the year. Nevertheless, Dorsey carried on, putting the band into a second motion picture, Ship Ahoy, which opened in June, and scoring four Top Ten hits, which, with his other chart entries, was enough to rank him fifth among the year's top recording artists. He earned the same ranking in the transitional year of 1943, despite being shut out of the recording studios, managing another four Top Ten hits, among them There Are Such Things and In the Blue of the Evening, chart-toppers Sinatra recorded with the band before his departure. Meanwhile, Dorsey turned to film roles to keep active, appearing in three movies released during 1943: Presenting Lily Mars, DuBarry Was a Lady, and Girl Crazy.

By 1944, RCA Victor had exhausted its stockpile of unissued Dorsey recordings and had to resort to reissues, managing Top Ten hits with the 1938 instrumental Boogie Woogie and the 1940 recording I'll Be Seeing You with Sinatra on vocals. Dorsey remained in Hollywood, appearing in Broadway Rhythm, which opened in April. The settlement of the musicians' union strike in the fall allowed him to return to the recording studio, and he scored six Top Ten hits in 1945 as a result, also placing an album, Getting Sentimental, in the newly instituted album charts. In May, he appeared in the film Thrill of a Romance. Dorsey scored another Top Ten album with Show Boat, containing songs from the Broadway musical, in February 1946.

The big bands were in decline, and like some of his peers, Dorsey broke up his band in December 1946. But his All-Time Hits was in the Top Ten of the album charts in February 1947, and in March How Are Things in Glocca Morra? (vocal by Stuart Foster) entered the singles charts to become a Top Ten hit. Dorsey reorganized his band, and in May he played himself in a largely fictionalized film biography, The Fabulous Dorseys. Clambake Seven, an album of music by Dorsey's small group, reached the Top Ten in October 1948, the same month he appeared in the film A Song Is Born, and the following month he was back in the Top Ten of the singles charts with Until (vocal by Harry Prime). In the spring of 1949, he had a double-sided Top Ten hit with The Hucklebuck (vocal by Charlie Shavers)/Again (vocal by Marcy Lutes). The compilation album And the Band Sings Too was in the Top Ten in September, and Dorsey returned to the Top Ten of the album charts with Tommy Dorsey Plays Cole Porter in April 1950. His final film appearance came in Disc Jockey in September 1951.

Dorsey switched to Decca Records and continued to perform with his band in the early '50s. In May 1953, Jimmy Dorsey broke up his band and joined his brother's orchestra as a featured attraction; before long, the band was again being billed as the Dorsey Brothers Orchestra. While playing a residency at the Statler Hilton Hotel in New York, the brothers launched a television series, Stage Show, as a summer replacement program in the summer of 1954. It returned on an occasional basis during the 1954-1955 season and ran regularly once a week during the 1955-1956 season. Elvis Presley appeared on the show for six consecutive weeks starting in January 1956, his first nationally broadcast appearances. Sedated by sleeping pills following a heavy meal, Dorsey accidentally choked to death at the age of 51. His brother led his band briefly afterward, but Jimmy Dorsey died in 1957. Nevertheless, the Tommy Dorsey Orchestra continued to record and perform, and under the direction of Warren Covington it scored a final million-selling Top Ten hit in November 1958 with Tea for Two Cha Cha.

Billed as "the sentimental gentleman of swing," Tommy Dorsey successfully combined the hot and sweet aspects of swing music while leading a band that consistently ranked among the top two or three orchestras in the U.S. from the mid-'30s to the mid-'40s, the entire swing era. His band was peopled with major jazz instrumentalists (including Bunny Berigan, Ziggy Elman, Pee Wee Erwin, Max Kaminsky, Buddy Rich, Charlie Shavers, and Dave Tough), arrangers (including Sy Oliver and Paul Weston), and singers (including Frank Sinatra and Jo Stafford) who went on to define popular music in the late '40s and early '50s. He was also an accomplished trombone player whose distinctive sound dominated his band and recordings. The bulk of those recordings were made for RCA Victor, though some later work was done for Decca and Columbia, and of course there are numerous airchecks, making for a large discography. ~ William Ruhlmann, Rovi 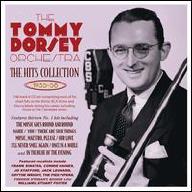 There Are Such Things 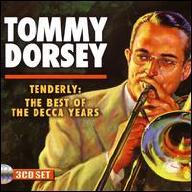 Tenderly: The Best of the Decca Years
2018 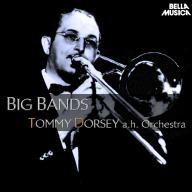 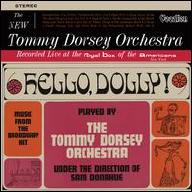 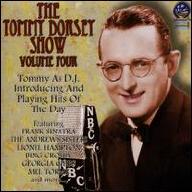 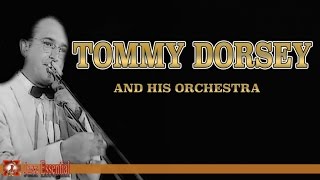 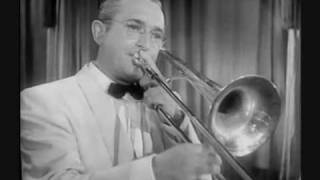 Tommy Dorsey - I'm Getting Sentimental Over You 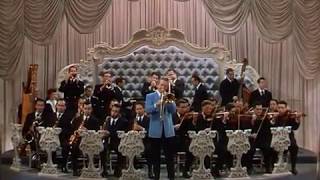 Buddy Rich with Tommy Dorsey & His Orchestra 1943 "Well Git It" 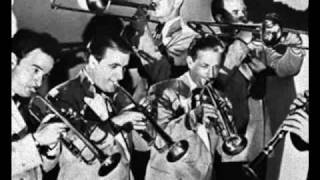 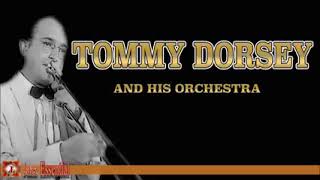 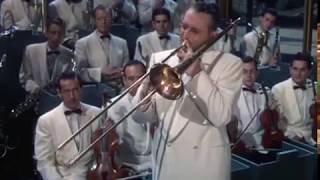 The Guy with the Slide Trombone (Hungarian Rhapsody) - Tommy Dorsey 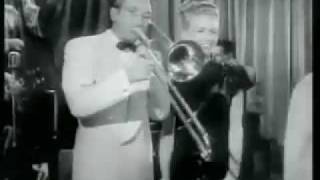