Close
Fred Rich
from Warsaw, Poland
January 31, 1898 - September 8, 1956 (age 58)
Biography
A major talent during the big-band era, Fred Rich is one of those leaders whose name might well have disappeared entirely, but for the fact that several alumni from his orchestra went on to bigger and longer careers. Born in Warsaw, Poland in 1898, Fredric Efrem Rich emigrated with his family to America early in the 20th century. The Riches settled in New York City, and Freddie, who showed great musical proficiency, took up the piano as a boy. By the time he was in his mid-teens, he'd found a very practical use for his talent, getting employment as a movie theater pianist; Rich's virtuosity and improvisation skills served him well, but he had ambitions beyond playing accompaniment to movies. He later studied at the Damrosch Conservatory of Music and, beginning in 1922, led his own orchestra at the Astor Hotel in New York.

One has to understand the social milieu in which Rich made his name to realize where that engagement, which lasted six years, put him. Hotel dance orchestras don't get much attention from music scholars today, but in their heyday, it was those ensembles -- and not the celebrated jazz bands of the '20s and early '30s -- that most Americans listened to, on the radio and on record. In 1922, when Rich started his gig at the Astor -- then one of the most prestigious hotels in New York, which meant the world as well in those days -- he was in one of the most enviably visible positions a bandleader could occupy anywhere in America. At the time, radio was just coming out of early infancy as a commercial medium, and soon started growing in popularity at an enormous rate. In the interim, Rich and his orchestra toured Europe in 1925 and 1926, and again in 1927 and 1928 -- even then, American bands could be assured of a rousing reception and big audiences almost anywhere in western Europe. Starting with his first record in 1925, as leader of the Astor Hotel Orchestra, he also recorded extensively during the '20s, leading studio ensembles whose ranks included more than their share of future jazz stars and legends, among them the Jimmy Dorsey and Tommy Dorsey, Joe Venuti (who, with Eddie Lang, cut an extraordinary violin-and-guitar-driven version of I Got Rhythm with Rich's orchestra), Bunny Berigan, Benny Goodman, and Tony Parenti. From 1928 until 1938, Fred Rich was the music director for the CBS network, making him one of the most important music administrators in the world. Indeed, the position was even more influential than it seems, because during those years, radio -- and not records -- were the major medium through which music was heard.

Getting on radio usually didn't pay a band or its members very much, but the exposure was vital, and far more important than having records out in those years. Rich conducted a lot of music himself for the network, and also determined what music was put over the network by other artists, as well as which orchestras and which soloists would be used on which shows. In essence, he could decide which composers got their music heard widely (or at all) on the CBS network, and which musicians benefited from the company's need for musical accompaniment. He had an enviable array of players to pick from. The Dorsey Brothers both turn up as soloists on his late-'20s and early-'30s sides, as do Venuti and Lang, and, most notable of all, Benny Goodman is on some of Rich's work as well, from the years when he was taking any work that came along. In 1938, Fred Rich left CBS and took a job as music director for various radio stations instead, while continuing to lead a band of his own -- included in the ranks of the latter was drummer Bill Peck, who fronted several latter-day big bands as a vocalist in the late '40s and early '50s, in addition to taking a run at rock & roll success. In 1942, Fred Rich became an executive in the music department at United Artists Studios, where business was booming at the outset of the decade. He remained there for nearly a decade, usually credited under the name Fredric Efrem Rich when he composed scores himself. Had luck been with him, Rich almost certainly would've been considered for a broadcast position in music, similar to his rival and colleague Paul Whiteman at ABC.

His days of performing and leading bands ended in 1945, however, when an accidental fall left Rich partially paralyzed. He kept his job into the early '50s, before being forced to retire because of his injuries. Rich died in 1956, at the age of 58, after a lengthy illness. He was a top musician in a field that's not well-written about or understood today, and an influential bandleader and administrator in a time when a lot of great and groundbreaking talents might've gone hungry if it hadn't been for him and CBS. His tenure at United Artists was more uneven, but his dance sides, which were just beginning to come out on CD in the '90s, capture some of the vitality and originality of a period in which those attributes are often overlooked. ~ Bruce Eder, Rovi 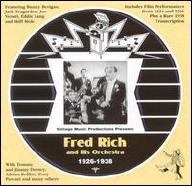 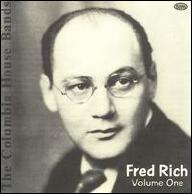 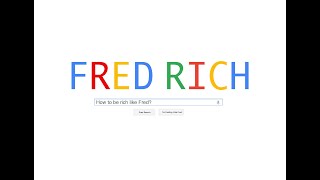 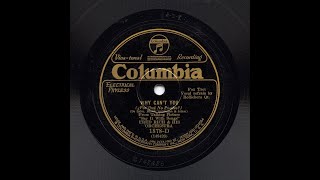 Fred Rich And His Orchestra - Why Can't You (HOT!!) 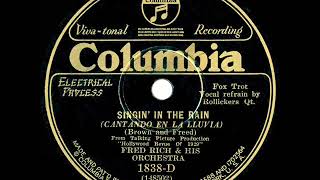 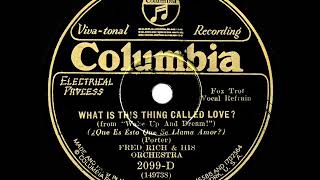 1930 Fred Rich - What Is This Thing Called Love? (with vocal quartet) 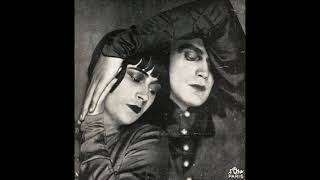 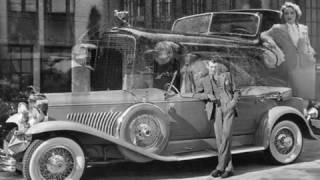 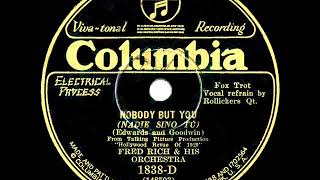 1929 Fred Rich - Nobody But You (Rollickers, vocal)
Available here: