Close
Gene Vincent
from Norfolk, VA
February 11, 1935 - October 12, 1971 (age 36)
Biography
Gene Vincent only had one really big hit, Be-Bop-a-Lula, which epitomized rockabilly at its prime in 1956 with its sharp guitar breaks, spare snare drums, fluttering echo, and Vincent's breathless, sexy vocals. Yet his place as one of the great early rock roll singers is secure, backed up by a wealth of fine smaller hits and non-hits that rate among the best rockabilly of all time. The leather-clad, limping, greasy-haired singer was also one of rock's original bad boys, lionized by romanticists of past and present generations attracted to his primitive, sometimes savage style and indomitable spirit.

Vincent was bucking the odds by entering professional music in the first place. As a 20-year-old in the Navy, he suffered a severe motorcycle accident that almost resulted in the amputation of his leg, and left him with a permanent limp and considerable chronic pain for the rest of his life. After the accident he began to concentrate on building a musical career, playing with country bands around the Norfolk, VA, area. Demos cut at a local radio station, fronting a band assembled around Gene by his management, landed Gene Vincent the Blue Caps a contract at Capitol, which hoped they'd found competition for Elvis Presley.

Indeed it had, as by this time Vincent had plunged into all-out rockabilly, capable of both fast-paced exuberance and whispery, almost sensitive ballads. The Blue Caps were one of the greatest rock bands of the '50s, anchored at first by the stunning silvery, faster-than-light guitar leads of Cliff Gallup. The slap-back echo of Be-Bop-a-Lula, combined with Gene's swooping vocals, led many to mistake the singer for Elvis when the record first hit the airwaves in mid-1956, on its way to the Top Ten. The Elvis comparison wasn't entirely fair; Vincent had a gentler, less melodramatic style, capable of both whipping up a storm or winding down to a hush.

Brilliant follow-ups like Race With the Devil, Bluejean Bop, and B-I-Bickey, Bi, Bo-Bo-Go failed to click in nearly as big a way, although these too are emblematic of rockabilly at its most exuberant and powerful. By the end of 1956, the Blue Caps were beginning to undergo the first of constant personnel changes that would continue throughout the '50s, the most crucial loss being the departure of Gallup. The 35 or so tracks he cut with the band -- many of which showed up only on albums or b-sides -- were unquestionably Vincent's greatest work, as his subsequent recordings would never again capture their pristine clarity and uninhibited spontaneity.

Vincent had his second and final Top Twenty hit in 1957 with Lotta Lovin', which reflected his increasingly tamer approach to production and vocals, the wildness and live atmosphere toned down in favor of poppier material, more subdued guitars, and conventional-sounding backup singers. He recorded often for Capitol throughout the rest of the '50s, and it's unfair to dismiss those sides out of hand; they were respectable, occasionally exciting rockabilly, only a marked disappointment in comparison with his earliest work. His act was captured for posterity in one of the best scenes of one of the first Hollywood films to feature rock roll stars, #The Girl Can't Help It.

Live, Vincent continued to rock the house with reckless intensity and showmanship, and he became particularly popular overseas. A 1960 tour of Britain, though, brought tragedy when his friend Eddie Cochran, who shared the bill on Vincent's U.K. shows, died in a car accident that he was also involved in, though Vincent survived. By the early '60s, his recordings had become much more sporadic and lower in quality, and his chief audience was in Europe, particularly in England (where he lived for a while) and France.

His Capitol contract expired in 1963, and he spent the rest of his life recording for several other labels, none of which got him close to that comeback hit. Vincent never stopped trying to resurrect his career, appearing at a 1969 Toronto rock festival on the same bill as John Lennon, though his medical, drinking, and marital problems were making his life a mess, and diminishing his stage presence as well. He died at the age of 36 from a ruptured stomach ulcer, one of rock's first mythic figures. ~ Richie Unterberger, Rovi 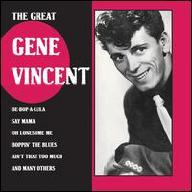 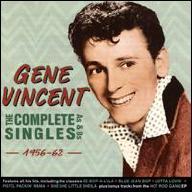 Story of the Rockers/Pickin' Poppies
2015 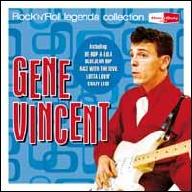 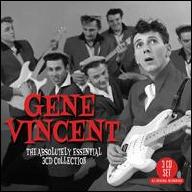 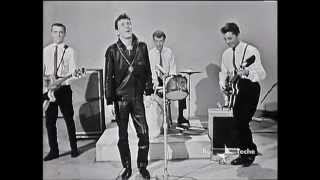 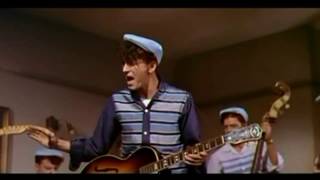 Gene Vincent & The Blue Caps - Be Bop A Lula 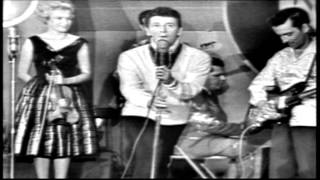 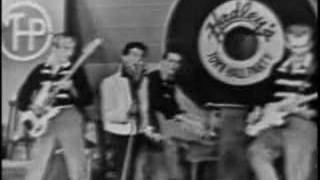 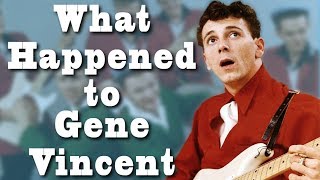 What happened to GENE VINCENT? 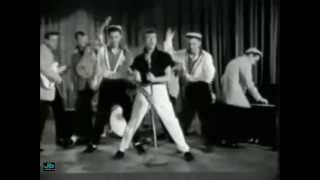 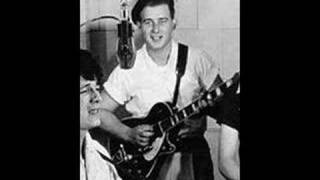