Close
Chita Rivera
from Washington D.C.
January 23, 1933 (age 88)
Biography
Tony-winning dancer, actress, and singer Chita Rivera made her primary impact as a performer in Broadway musicals, appearing in them regularly for over 40 years, including a breakout part in West Side Story and starring roles in Bye Bye Birdie, Chicago, The Rink, and Kiss of the Spider Woman. She also performed in nightclubs and, occasionally, on television and in film. As a recording artist, she is represented by a series of original Broadway cast albums for the most part, although she did make a few solo recordings.

Rivera was born Dolores Conchita Figueroa del Rivero in Washington, D.C., on January 23, 1933. Her father, Pedro Julio Figueroa, was a clarinet and saxophone player who died when she was seven. Her mother, Katherine Anderson del Rivero, took a job at the Pentagon. Rivera began ballet lessons at the age of 11. Five years later, she auditioned successfully for the American School of Ballet, part of the New York City Ballet, and attended on a scholarship. She switched to the musical theater when she was cast in the chorus of the national tour of Call Me Madam. She then worked on Broadway as a replacement chorus member in Guys and Dolls and Can-Can. On February 28, 1955, she opened off-Broadway in Shoestring Revue, a show produced by Ben Bagley and featuring songs written by Lee Adams, Sheldon Harnick, Michael Stewart, and Charles Strouse, among others. (Later in her career, she participated in Bagley's series of "revisited" albums of obscure songs by famous theater songwriters, appearing on Kurt Weill Revisited and Leonard Bernstein Revisited.) Shoestring Revue ran 96 performances. Three months later, on May 26, 1955, she made her Broadway debut as a featured performer in the book musical Seventh Heaven, with a score by Victor Young and Stella Unger. It ran only 44 performances, but it was recorded for a cast album by Decca Records, giving Rivera her recording debut singing Camille, Collette, Fifi and Love, Love, Love.

Within a year, Rivera had her first successful Broadway musical, appearing in a featured role in Mr. Wonderful (March 22, 1956), a show built around its star, Sammy Davis, Jr., with songs written by Jerry Bock, Larry Holofcener, and George David Weiss. It ran 383 performances, and Decca released a cast album. She achieved stage stardom with her featured role as Anita in West Side Story (September 26, 1957), the modernized Romeo and Juliet story with music by Leonard Bernstein and Stephen Sondheim, including her big numbers, America and A Boy Like That. It ran 732 performances with a cast album released by Columbia Records. On December 1, 1957, she married actor/singer Tony Mordente, who also was appearing in West Side Story. Their daughter, Lisa Mordente, was born June 30, 1958. She became an actress. Rivera and Tony Mordente were divorced in 1966.

Rivera also appeared in the London production of West Side Story that opened December 12, 1958. She enjoyed her second consecutive Broadway hit appearing opposite Dick Van Dyke in Bye Bye Birdie (April 14, 1960), a musical satire based on Elvis Presley's departure for the Army with a book by Michael Stewart and songs by Charles Strouse and Lee Adams. It ran 607 performances, and Columbia released the cast album. Again, she opened the show in London, starting on June 15, 1961, and she appeared on the original London cast album released by Philips Records in the U.K. and by the Wing Records subsidiary of Mercury Records in the U.S.

After her two big hits, Rivera hit bad luck with her next show, Zenda, a musical adaptation of -The Prisoner of Zenda, in which she starred with Alfred Drake. It boasted songs by Vernon Duke and Martin Charnin, but it closed during its pre-Broadway tryout after opening in San Francisco on August 5, 1963. Nevertheless, one of the performances was recorded live, and a cast album was released eventually by Blue Pear Records. Rivera returned to New York, where she made a solo LP, And Now I Sing!, for the tiny Latin-oriented Seeco Records label and appeared in Wonderworld, a revue with music by Jule Styne, at the New York World's Fair, starting on April 7, 1964. By the fall, she had found another Broadway vehicle. Bajour (November 23, 1964) featured songs by Walter Marks, and Rivera starred opposite Herschel Bernardi. The show ran a respectable 218 performances, and Columbia issued a cast album.

Rivera signed a singles deal with Dot Records that resulted in a couple of 45s, Blue Is the Color/Come on Back in 1965 and Emptiness/Raining in My Heart in 1967, and accepted assignments touring in shows around the country, including the national tour of Sweet Charity, in which she starred, in 1967. She also appeared, albeit in a secondary role, in the film version of the musical, released in early 1969, and on the soundtrack album released by Decca. Later in the year, she was in another musical that turned out to be a non-starter, Meredith Willson's 1491 (October 28, 1969), which ran in Los Angeles, but did not go to Broadway. The early ‘70s brought more touring. But she was back in New York on March 11, 1973, to appear in the one-night benefit performance Sondheim: A Musical Tribute, reprising her performance of America, and it was recorded for a two-LP set released by Warner Bros. Records. In September 1973, she had her first regular role in a television sitcom, appearing for the third season of #The New Dick Van Dyke Show and thus reuniting with her old partner from Bye Bye Birdie. But the show ran only another year, ending in September 1974.

Rivera returned to Broadway in her third major hit, Chicago (June 1, 1975), co-starring with Gwen Verdon in John Kander and Fred Ebb's satiric story of crime and celebrity, set in the 1920s. It ran 947 performances, and Arista Records released the cast album on which Rivera sang such songs as All That Jazz. After her run in the show ended, she had a small role in the disastrous 1978 movie musical #Sgt. Pepper's Lonely Hearts Club Band. Another misbegotten effort in which she was involved was a sequel to Bye Bye Birdie, Bring Back Birdie (March 5, 1981), again with the creative team of Michael Stewart, Lee Adams, and Charles Strouse, which managed a mere four performances on Broadway, although it was recorded for an album issued by Original Cast Records. Another failure, if not quite so bad, was Merlin (February 13, 1983), starring magician Doug Henning with music by Elmer Bernstein and Don Black. It ran 199 performances on Broadway, but went unrecorded.

Rivera's next musical was barely more successful in terms of performances, running 204, but it was better received. In The Rink (February 9, 1984), she played the mother of a character played by Liza Minnelli and earned a Tony Award for her trouble. Polydor Records released the cast album. Rivera was seriously injured in a car accident, but recovered in time to open in the revue Jerry's Girls (December 18, 1985), an anthology of the songs of Jerry Herman that ran 139 performances. She spent the rest of the 1980s working in nightclubs and touring, including a yearlong jaunt, 1988-1989, in Can-Can accompanied by the Radio City Music Hall Rockettes.

Rivera's fourth major musical success had a long gestation period. Kiss of the Spider Woman was based on Manuel Puig's novel, which also had been the source of director Hector Babenco's 1985 film, and concerned prisoners in a South American jail, one of whom dreams of a famous Hollywood star. The songs were by John Kander and Fred Ebb. A rocky pre-Broadway tryout in 1991 led to a 1992 production in Toronto, followed by a successful opening on October 20, 1992, in London. (There was a recording of the Toronto cast by First Night Records, and of the London cast by RCA Victor, both featuring Rivera.) The show finally opened on Broadway on May 3, 1993, for a run of 906 performances, and Rivera won her second Tony Award for it. She headed a national tour that ran two years. Thereafter, she performed with Carol Channing in a show called Broadway Legends and in a club act she called "Chita All That Jazz." She also appeared in children's television, resulting in her participation on the TV soundtrack albums Happily Ever After: Fairy Tales for Every Child and, later, Johnny and the Sprites. Her appearance in the televised concert #My Favorite Broadway: The Love Songs in October 2000 led to her inclusion on a 2001 album and home video drawn from the show. She had a cameo in the 2002 film version of #Chicago.

She returned to Broadway in a supporting role in a revival of Maury Yeston's Nine (April 10, 2003), an adaptation of the Federico Fellini film #8½ that ran 283 performances, and was heard on the cast album released on the PS Classics label. Returning to club work, she dubbed her show "And Now I Sing," after her ‘60s LP. She appeared on Broadway in her own show, Chita Rivera: The Dancer's Life, from December 11, 2005, to February 19, 2006, then took it on tour. She made another of her rare appearances in a feature film with #Kalamazoo?, which opened in April 2006. On December 26, 2006, Masterworks Broadway, a division of Sony BMG, released the Rivera compilation album Legends of Broadway, featuring her performances of songs from the West Side Story, Bye Bye Birdie, Bajour, Chicago, and Kiss of the Spider Woman original Broadway cast albums. In the spring of 2008, she starred in a production of The Visit, a musical adaptation of the Friedrich Dürrenmatt play with songs by Kander and Ebb, at the Signature Theatre in Washington, D.C. Signing to the newly formed Yellow Sound Label, she recorded And Now I Swing, only her second solo album as such, featuring songs associated with her throughout her career along with standards. It was released October 13, 2009, in anticipation of a concert tour dubbed "Chita Rivera: My Broadway" set to begin in January 2010. ~ William Ruhlmann, Rovi 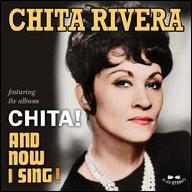 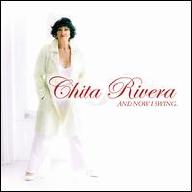 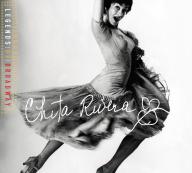 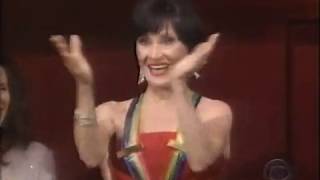 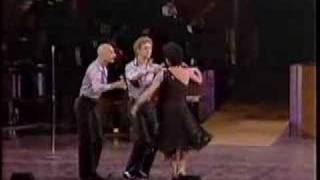 Chita Rivera performs "America" and "All That Jazz" 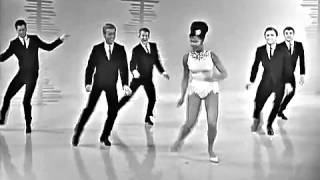 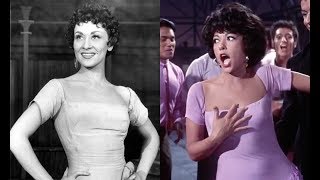 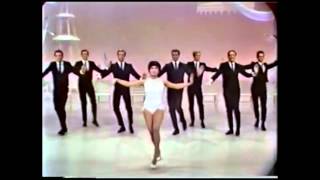 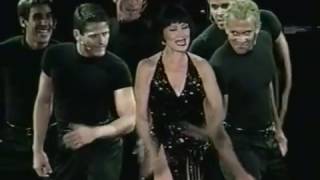 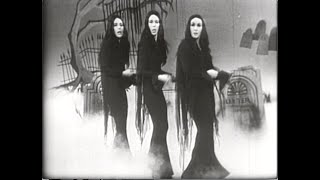