Close
Buster Smith
from Ennis, TX
August 24, 1904 - August 10, 1991 (age 86)
Biography
A talented alto saxophonist and an arranger/composer who probably wrote One O'Clock Jump (although Count Basie received the credit), Buster Smith's contributions to jazz are difficult to assess because he was under-recorded throughout his career. Charlie Parker often acknowledged Smith's influence on his tone, and the few early recordings of the older altoist do show some similarity (although Bird's style would become much more advanced); Parker played in Smith's band in 1937.

Buster Smith was a fixture in Kansas City for the bulk of his most significant years. He was with Walter Page's Blue Devils from 1925-1933 (the band only made two recordings) and Bennie Moten's orchestra during its last period (1933-1935), and co-led the Barons of Rhythm with Count Basie. Unfortunately, he chose not to accompany Basie to New York. When Smith finally went East, he contributed arrangements to several orchestras (including those led by Gene Krupa, Count Basie, and Benny Carter) and had short stints with Don Redman, Hot Lips Page, Eddie Durham, and Snub Mosley. Buster Smith returned first to Kansas City and then finally to Texas for the remainder of his life. He recorded one very obscure (and long out-of-print) Atlantic album in 1959. ~ Scott Yanow, Rovi 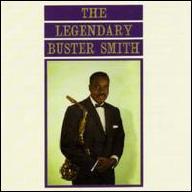