Close
Jerry Granelli
from San Francisco, CA
December 30, 1940 - July 20, 2021 (age 80)
Biography
Drummer, percussionist, composer, and bandleader Jerry Granelli possessed a deftly lyrical, fluid approach to music. He was treasured by other musicians as a timeless and chameleon-like artist, capable of transcending era, genre, and even his own style to serve the music at hand. He played on some of the most celebrated jazz recordings in American music including Vince Guaraldi's Cast Your Fate to the Wind: Jazz Impressions of Black Oprheus and Charlie Brown Christmas, as well as Mose Allison's Your Mind Is on Vacation. In addition to a six-decade career in jazz, Granelli also played with folk group the Kingston Trio, psychedelic rock with We Five, and worked with Sly Stone as a sideman. Granelli co-founded Naropa Institute's Creative Music Department with Collin Walcott, and released his leader debut, Visions, in 1978. While teaching at the Cornish Institute in Seattle during the '80s, Granelli met Jay Clayton, Gary Peacock, Ralph Towner, and Julian Priester, who worked on the drummer's One Day at a Time album in 1989. During the 1990s, his Koputai offering won accolades globally, even as he worked as a sideman with Jane Ira Bloom, Charlie Mariano, Annabelle Wilson, Ford, and Lee Konitz. That decade saw him form two recording and performing bands: Jerry Granelli UFB and Jerry Granelli Badlands. He released The Only Juan with pianist Jamie Saft in 2001, and helmed the rockist V16 Project in 2003. After the issue of 2010's solo percussion outing 1313, Granelli led the session for 2017's Dance Hall with guitarists Robben Ford and Bill Frisell.

Granelli was born in San Francisco's Mission District in 1940. He was exposed to jazz early by his dad -- who loved Gene Krupa and played drums in an Italian wedding band -- and his uncle, a hardcore bebop fan. Granelli claimed he learned to sit at his dad's kit and play Louis Jordan's "Open the Door Richard" by the time he was four. After rebuffing his parents' attempt to get him to learn the violin, Granelli studied under classical player Al Carr, then sat in when his dad's friends played Dixieland standards, and competed in local contests until he beat virtually every child and teen to come along -- he was ten. His dad would take him out to jazz gigs once a week on a scene that boasted the Jazz Workshop, the Blackhawk, Jimbo's Bop City, and The Lighthouse. At 12, his uncle took him to hear Charlie Parker. Hearing Max Roach's melodic and harmonic playing on "Parisian Thoroughfare" caused an epiphany: He had his first glimmer of "a musician that plays the drums." As a teen, Granelli spent two years studying with Dave Brubeck Quartet drummer Joe Morello, which proved invaluable to his career. Granelli also saw and listened intently to drummer Jo Jones, Roy Haynes, Philly Joe Jones, Danny Richmond, and Elvin Jones, all of whom proved kind and generous to the young musician.

Granelli played in numerous pickup bands, including cabaret and R&B groups. He got his first break in the early '60s; after touring with the Johnny Hamlin Quartet, Granelli discovered that Vince Guaraldi's rhythm section had moved to Los Angeles. The pianist had many bookings due to the chart and radio success of Cast Your Fate to the Wind. Guaraldi gave the young drummer a shot at playing a series of gigs in Sacramento, then hired him. He remained with the pianist's group and played on virtually all of Guaraldi's Charlie Brown-themed recordings including Jazz Impressions of a Boy Named Charlie Brown (1964) and A Charlie Brown Christmas (1965); the latter became one of the most beloved soundtracks in American music history.

Granelli loved the experience and the money he received from playing with Guaraldi, but found it creatively constricting. He had heard Dewey Redman and Pharoah Sanders at Bop City; after finishing on the bandstand with his regular gig, he spent four hours playing with vanguard players at Bop City. After leaving Guaraldi, Granelli joined progressive jazz pianist Denny Zeitlen's group, recording the studio LPs Carnival and Zeitgeist for Columbia. He also played on the trio's Live at the Trident and accompanied many jazz vocal stars including Carmen McRae, Jimmy Witherspoon, Lou Rawls, and pianist/songwriter Mose Allison; he played on the latter's career-defining Your Mind Is on Vacation in 1976. Granelli also met radio program host and aspiring producer Sylvester Stewart (pre-Sly the Family Stone), who investigated and nurtured all kinds of folk and psychedelic musicians. Granelli's kit work on We Five's "You Were on My Mind" propelled the single to number three and double-platinum status. He also spent time playing live with pianist Bill Evans but declined to join his trio. Granelli also played in the non-jazz group the Ensemble. They were inducted into the Rock and Roll Hall of Fame as pioneers of the psychedelic era. Already a Buddhist, Granelli went to hear Tibetan teacher Chogyam Trungpa speak. The drummer was so taken with the talk that he compared it to seeing Charlie Parker for the first time. He visited the fledgling Naropa Institute in Boulder, Colorado, in 1974 and 1975 and moved to the Buddhist University to teach in 1976. He and Oregon's Collin Walcott co-founded the Creative Music Department. Granelli served as its co-director until 1980. While at Naropa, he issued his leader debut, Visions in 1978. The drummer went to teach at Seattle's Cornish Institute in 1980, where he met and played with fellow instructors Ralph Towner, Julian Priester, Gary Peacock, Robben Ford, and vocalist Jay Clayton, with whom he released the album Sound Songs for JMT in 1987.

In 1990, Granelli issued One Day at a Time and Koputai as a leader with his colleagues as sidemen. It commenced an intense period of activity for the drummer/ instructor. First he moved to Halifax, Nova Scotia, and taught at a conservatory. In 1991, he co-led the session for Forces of Flight with bassist Glen Moore and vocalist Annabelle Wilson, and followed it quickly with the conceptual jazz oratorio A Song I Thought I Heard Buddy Sing and Another Place before taking part in the Lee Konitz-led date Haiku. Granelli formed two bands during the decade: Jerry Granelli UFB, who issued News from the Street in 1995 and Broken Circle a year later (on the Intuition label), and Jerry Granelli Badlands' Enter, A Dragon (1998) and Crowd Theory (1999) on Songlines. The drummer also played on dates by Ford and Charlie Mariano during those years. He closed the decade with his own Music Has Its Way with Me in 1999.

The new century kicked off with a bang for the drummer and professor. In 2000, at the suggestion of Charlie Haden, he was hired to play on the Pat Metheny & the Heath Brothers' outing Move to the Groove, which also included Ralph Towner on synth. Granelli and pianist Jamie Saft began their long, ongoing collaboration with The Only Juan for Loveslave in 2001 and recorded the avant duo outing Iron Sky for the label with clarinetist Jeff Reilly. Two years later, Granelli formed the avant-rock outfit V16 Project with bassist Anthony Cox and guitarists David Tronzo and Christian Kogel, and they issued a self-titled effort. Granelli's Sandhills Reunion appeared in 2004 and placed the drummer in the company of Francois Houle, Reilly, Kogel, Rinde Eckert, and others. Two more V16 Project outings were also released, The Sonic Temple: Monday and Tuesday (2007) and Vancouver '08.

In 2010, Granelli became a Canadian citizen and issued the widely acclaimed solo percussion outing 1313 on the tiny Divorce label. He and Saft released the duo outing Nowness for the pianist's Veal imprint in 2013. In 2015, Granelli issued What I Hear Now for Canada's Addo label, leading a pianoless sextet. Two years later, the universally acclaimed Dance Hall appeared from JustinTime/Nettwerk. A good-time set of blues and R&B tunes produced by Lee Townsend, Granelli's crew included arranger Stephen Bernstein, guitarists Ford and Bill Frisell, saxophonists Steve Kaldestad and Bill Runge, and trumpeter Derry Byrne. Granelli's son, J. Anthony Granelli, played bass and served as musical director. In 2020, at nearly 80, Granelli issued a pair of recordings: a reunion duo set with Clayton for Sunnyside entitled Alone Together and Plays the Music of Vince Guaraldi Mose Allison for RareNoise, with Bradley Jones on bass and Saft on piano. Jerry Granelli died on July 20, 2021 at his home in Halifax, Nova Scotia, Canada at the age of 80. ~ Thom Jurek, Rovi 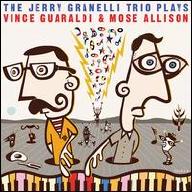 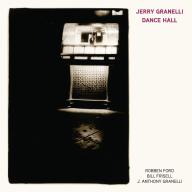 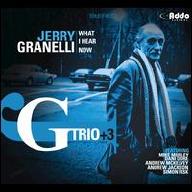 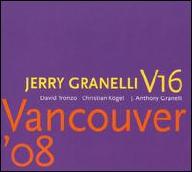 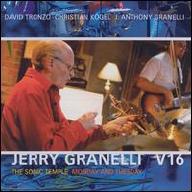 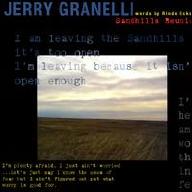 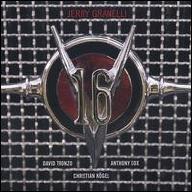 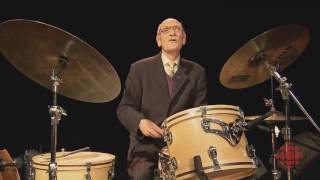 Linus and Lucy: with the Jerry Granelli Trio 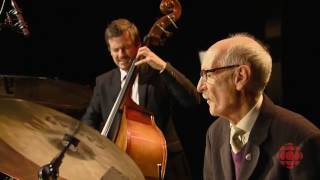 Skating with the Jerry Granelli Trio 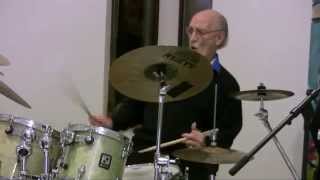 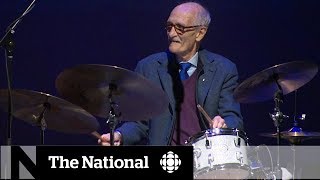 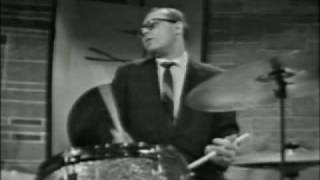 Jerry Granelli In The Moment Part 2 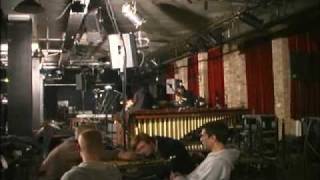 Jerry Granelli In The Moment Part 1 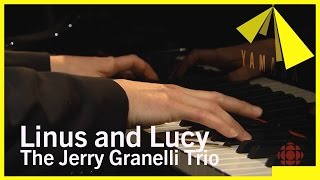