Close
Book of Rhymes
by Eminem, DJ Premier
on Music To Be Murdered By [Side B]
Lyrics
I don't smile, I don't frown, get two up or get two down (nah)
I was here, so were you, you came and went, I stuck around (yeah)
Still here now, stop me how?
Your opinion's like a broken calculator, that shit doesn't count
Shut your motherfucking mouth

Haven't used all the tricks I have, so like my balls, I'm in my bag
I get a little testy when I'm mad, sick of wrestlin' this iPad
Unsuccessfully I might add, and I know it's best to leave it live
But even I get obsessed with readin' everything
And let it get the best of me 'til I snap
But I need to get off the internet (get off the internet)
I need to get on the mic (get on the mic)
You need to get off the internet (internet), you need to get you a life
Why you waste time just to comment on shit? (Comment on shit)
'Specially shit you don't like (shit you don't like)
Don't like it, don't listen, but don't tell me about your favorite rapper
If it's some shit he didn't write
What happened to Slim? He was no cap with the pen
He used to rap like the people his music was for
He was exactly like them
The dude who used to be poor, why can't he tap into him?
Can't use that excuse anymore
He's mad at the wind, he's in a nuclear war
With a clown he's yelling "At it again"
I talk to your mother, she told me she love me
All she wanna do is just hold me and hug me
Wants nobody but me, she showed me the duggy
Can I get a witness like notary public?
She said kicks some fly shit (fly shit)
I said I got wings on my ass (wings on my ass)
Told her my dick's a cockpit (dick's a cockpit)
I fly by the seat of my pants (Seat of my pants)
Sinful thoughts, this beat is crazy, this shit's retarded
This Instru's mental, too many bars, incidental charges
When did it start? I been cold hearted in this heart
Since kindergarten, mental sharpness
Which makes Slim a walking dentist office, bitch, I invented flossin'
Yeah, I used to wonder (I used to wonder) where my next meal's gonna come from (meal's gonna come from)
Now I just wonder (now I just wonder) where my next mil's gonna come from
I cannot have no success, unless when I finally make it
I get to remind all the haters, who shitted on me when I'm on my way up
My floor is y'all fool's ceilings
If I was you, I would step or find yourself twisted
That's how you'll wind up like spiral stairs
I will swear on a stack of Bibles
I will tear new behinds out of rivals, even your idols
I don't care, it's Music To Be Murdered By
So Bon Iver can swallow a fucking Ja Rule bobblehead
Then die slow like Alzheimer's (haha)
Low sniper, I hold the micro-phone like a loaded rifle
My dome's brighter, all I spit from my skull is fire
All that's missing's a motorcycle with the chrome wires, spoke tires
And y'all are a flow biters, so I don't gotta explain why they call me your ghostwriter

Haven't used all the tricks I had, so like my balls, it's in my bag
I tend to get a little testy when I'm mad
But gift of gab and pen to pad
Turn temper tantrums into anthems
Put lips to ass and kiss the cracks
Spit your damnedest, you're still gonna hit the canvas
Rippin' rappers, veterans to whippersnappers
Mr. Mathers is killin' this shit, villainous wit with scant less
Syllables rip the planet, biblical shit's finna hit the fan
Anybody wanna go tit for tat's gonna get hit with that
Then the amygdala hippocampus
Is gonna trigger the ingoramus
To think of the most ridiculous shit then spit
Then pin it against these pitiful rappers
Insidious, these idiots witty as shit, against me, shitty as MC Hammers
Get your whole squad, send the task force in
If you want it, you're 'bout to get what you asked for
Then put your helmet on, strap your chin
You're 'bout to get you a crash course in
Who not to start a motherfuckin' rap war with
Or to go against, fuck would you wanna do that for?
No offense, but are you retard, slow or dense?
A fuckin' penny has more sense
Yeah, now you gotta get killed, but it's not a big deal
But every thought is so ill and so methodical
Thought I swallowed a pill, I'm startin' to feel like I'm an automobile
With Barnacle Bill inside the car at the wheel
Inside a carnival, 'cause I'm plowin' into everyone who wrote snotty articles
And that explains why the fuck you clowns are all in my grill
Joy and pain, fortune, fame, torture, shame
Choice I made, swore someday
The world'll pay, less to lose, more to gain
Daughter's raised, yesterday, glory days, adored and praised
Ignore the hate, address the fake
Toured with Dre, tore a page from Jordan came
Destroyed the game, before you came, enjoy your stay
Before it's gone away, but the more you claim
That you're gonna point and aim
If you joined a gang, your shit isn't goin' to bang
You're just boring, lame and more the same
You have an enormous chain, but a storm-less brain
The most you could form is rain
Your shit is pointless, same as a scoreless game
So, bitch, quit lyin', your denyin' like Mr Porter's name
Borderline bipolar disorder since my stroller
Eyes rollin' back in my skull like Eli Porter
Fire motor, rounds I told to every iota or I load up
I owe to my motor, mouth
This is my note to self
Sometimes you're gonna bomb
So you might just have to blow yourself up with no one's help
I just wrote it down in my book of rhymes
Premo, take us out 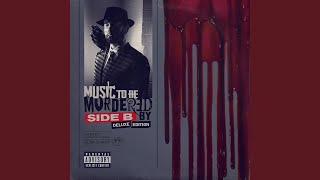 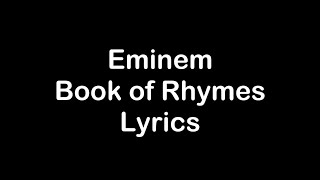 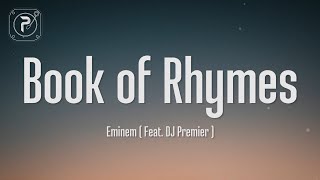 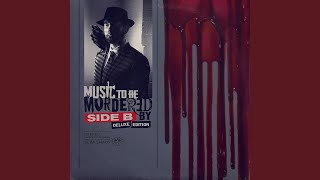 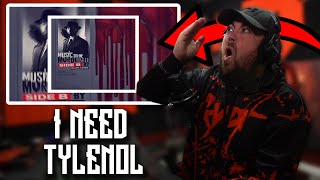 EMINEM IS INSANE | RAPPER REACTS to Eminem - Book of Rhymes 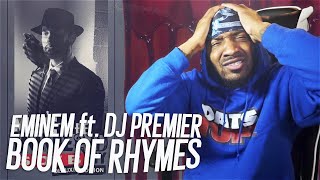