Close
Magnificent Seven (Return)[Live at Shea Stadium]
by The Clash
on Live at Shea Stadium
Lyrics
Ring! Ring! It's 7:00 A.M.!
Move y'self to go again
Cold water in the face
Brings you back to this awful place
Knuckle merchants and you bankers, too
Must get up an' learn those rules
Weather man and the crazy chief
One says sun and one says sleet
A.M., the F.M. the P.M. too
Churning out that boogaloo
Gets you up and gets you out
But how long can you keep it up?
Gimme Honda, Gimme Sony
So cheap and real phony
Hong Kong dollars and Indian cents
English pounds and Eskimo pence

Working for a rise, better my station
Take my baby to sophistication
She's seen the ads, she thinks it's nice
Better work hard - I seen the price
Never mind that it's time for the bus
We got to work - an' you're one of us
Clocks go slow in a place of work
Minutes drag and the hours jerk

Wave bub-bub-bub-bye to the boss
It's our profit, it's his loss
But anyway lunch bells ring
Take one hour and do your thanng!
Cheeesboiger!

What do we have for entertainment?
Cops kickin' Gypsies on the pavement
Now the news - snap to attention!
The lunar landing of the dentist convention
Italian mobster shoots a lobster
Seafood restaurant gets out of hand
A car in the fridge
Or a fridge in the car?
Like cowboys do - in T.V. land

What have we got? Yeh-o, magnificence!!

Luther King and Mahatma Gandhi
Went to the park to check on the game
But they was murdered by the other team
Who went on to win fifty-nil
You can be true, you can be false
You be given the same reward
Socrates and Milhaus Nixon
Both went the same way - through the kitchen
Plato the Greek or Rin Tin Tin
Who's more famous to the billion millions?
News Flash: Vacuum Cleaner Sucks Up Budgie
Oooohh...bub-bye 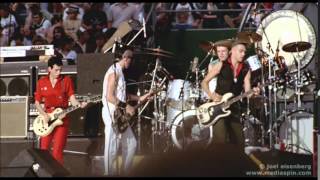 The Clash audio live at the oakland collesium, USA 1982 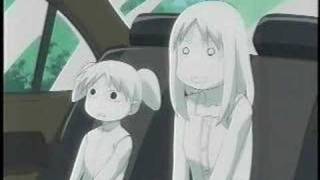 AMV The Clash The Magnificent Seven 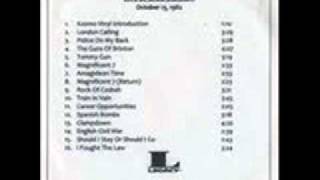 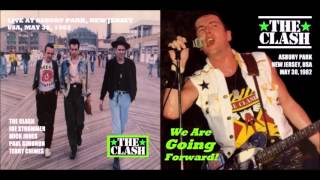 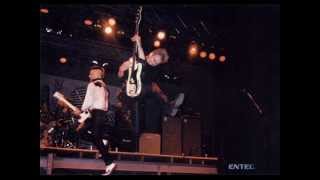 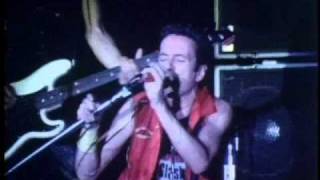 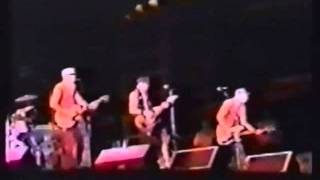 The Clash - Police On My Back (Montego Bay, Jamaica '82)
Available here: