Close
Flipside
by Juvenile Committee
on Juice [U.K. Mid Price]
Lyrics
Here's the situation for brothers in the ghetto
Livin' in the projects it's hard to get ahead, so
What you gotta do is be down with each other
Other fools tryin' to trip, can't trip on each other
Like a lobster in his bucket, you try to escape
You steal, you kill, you rob, you take
Clownin' on your brothers' back, one thing is a fact
They're gonna be sure to push ya back in the pack
You want to do a lick cause you short, you float
If you had to blast will you pop or will you tote?
187 on the head, you killed a man
You're all fired up, so you feel you in command
Try to be the baddest in the crew
Why trip on a brother that's down with you?
And now I understand why you could do so
'Cause you probably wasn't down from the get-go

Some people they got homeboys like I do
Like Stevie, Jay, Rock and the rest of the crew
Yo, we chill with each other and we kill with another
And we never ever keep anything undercover
'Cause if we do, we have to keep it in a circle
You're soft as a nerd, so don't be trippin' on the turf, yo
This is what they say: Cause he was with us on that day
First he was chillin' with his nine and A.K.
The cold thing about it, we didn't see it comin'
It's cold stunnin'
First we were hangin', now it's cold gunnin'
What happened to the do-or-die situation
Was it a complication or the conversation?
In the midst with a mixed personality
Po-po brutality, flipside mentality
To make you the weak link in your crew
You're trippin' off yourself, you wanted all the juice

You can't faze me, cause I live my lifestyle crazy
Boys in the hood wonder why I got lazy
'Cause no respect and no money don't mix
I like havin' kicks, so I hustle on the rich
I bought a gat from a neighborhood street thug
A .44 mag full of .44 slugs
Now it's time for robbin' niggas' hoes
Kickin' in do's, and leavin' prints on .44s
Confused is the way I live
It's my prerogative, cause I don't want to give
To the people, cause I was treated like a sequel
Never treated equal, now I live illegal
Doin' the things that you shouldn't do
But you didn't know what I had to go through
Like trippin' on the homeboys in my crew
I wanted all the juice

Brothers in this world it's so hard to be good
To live life like it's legal and work like you should
First it seem right, until one night
It don't seem right, you don't see the light
Start feelin' like the whole world dissed you
Pop a big gun, and doin' self-defense too
See, that's the prob', you learn how to rob
Take it back to back, as if it was a job
Teach your boys the game, the game is what it's like
But that'll move the crew, and somethin' ain't right
Your boys ain't with you, your boys want to fight
Bustin' all the bones, you try to get a stripe
Front on everybody cause you're headstrong
What you're doin' ain't right, it's dead wrong
Flip-flip-flip it on the flipside
You done flipped up, committed suicide

Juice is a five-letter word of corruption
From town to town it can start an explosion
So what we gotta do is play like a lemon
Squeeze out the juice and peace among men and women
'Cause envy and jealous' can ruin the land
But brothers tryin' to play God, and they job
Is keepin' the world in their hands
But that's a mission that's impossible
It'll only end up being a lotta people in the hospital
Brothers killin' and killin'
Hurtin' feelings, that's illin'
To be on top they was willin'
But they ain't nothin' but illin'
Attitude that's rude, be cool instead
Because the black guys are in jail, or either they're dead
Your grave site is waitin' for you
Because you don't think about the things that you do
All the screws in your head must be loose
Because you did ill to kill
You wanted all the juice 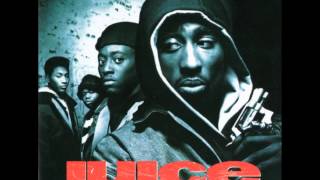 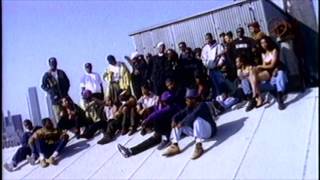 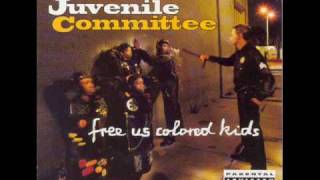 Juvenile Committee - Livin In The Ghetto