Close
500 Homicides
by Lil Durk
on Remember My Name
Lyrics
Oh!, these niggas ain't gangstas
Stay tryna take my lil homie off the streets huh
Free 'Nine bitch!
We still got real niggas out here (so everybody gangsta now huh?)
Where you from nigga?
Free the guys man, you ain't from where we from
I told my niggas we gon' make it man
It's a fucking movement man
We a fucking family, we ain't a gang
OTF, (SQUAD!)

These niggas is bitches, getting info from bitches
Go and tell to the piggies
I'm tryna get riches, and stay on that business
3 bro niggas snitching, my case almost over
You lucky it wasn't pending
I put 2 in his lemon, this 4-5 a lemon
Extended clip for his niggas
And he ain't shit to his niggas
We don't hesitate, from DD and Bébé's just know that the opps ain't never safe
Load up the Glock, and reload the 8
Do a drill on the op, no clones I see dots
ACGs for the God's church and one power rock
I'm on the block
Hope my tape don't flop, and it go gold when it drop
I'm not a liar, start D'ing them baggies, and we risking indictment
Just to get flier than the first day ticket, united 300, the riot
Murder murder, kill kill, in the jam I'll never squeal
My label only time I deal
I fuck with GB's most king snapes, foes into niggas under kneel
Silver spoon, you don't know how hunger feel
Dreaming 'bout 100 mil, step on that curb with 100 pills
Western Union money to bro and them, in the cell doing 20 years
And I lost a couple of these niggas, and they ain't never seen 20 years, oh!
Heard them die when I was out of town, shit happen when I'm not around
Slide through every opp block and we up shots till they not around
What's up with this twitter beef?
Thought we was keepin' it in the streets?
They mad I'm in the winner seat, from the summer time 'till winter breeze
And choppa squeeze, bitch go blaat, blaat, blaat!
I ain't even gotta rap, (rap, rap) racks in 'em trap (trap, trap)
One time no light bulb, bro n 'em got a lamp, (lamp, lamp)
Where you from you ain't stamped (stamp, stamp)
Niggas know we the champ (champ, champ)
Got niggas sneak dissin', it ain't rap
Make a real nigga gotta spit facts
Got some niggas saying keep it only rap
That's how these old niggas stay on the map
Headshot, we ain't getting into that
Niggas tellin' hands full of pins and packs
Grab a pack, blood bleeding real bad
Doin' hit in a coupe, in a Range, or an Audi
Fuck a nigga doubt me
All on my dick when they see me
Knowing this bitch wanna be me
Hell yea you can die over a retweet
I'm grabbing my pole on mimi
I can't see a nigga like Stevie
I won't tell, I'll take me a BG
Let's get it!
GANG! 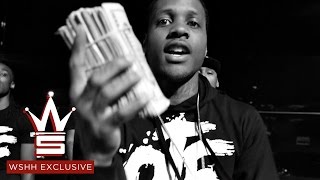 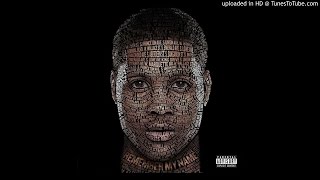 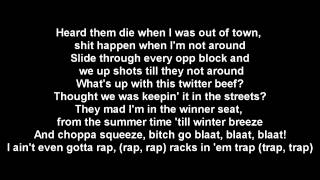 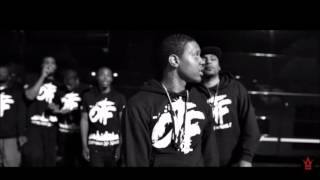 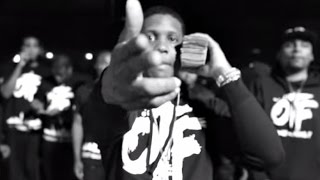 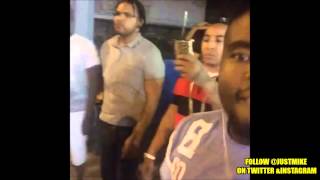