Oh
Brace yourself, I'm the ace with grace
I'ma win the race and make you feel disgrace
In any case, yo, I'm moving like a steeplechase
MC soldiers, about face
Now step off, I need room for my takeoff
My custom made lyrics slays, yours are soft
I think you better tape this, yo, you can't escape this
Yo, I planned it out just like a landscapist
Whipper-snapper back up for coming crap up
I plan to trap a MC and kidnap 'em
Phony, so skip the baloney
You and your cronies need to jump on a pony
And roll, cause you're just a rookie
When it was time for rap school, you must of played hooky
I'm the show-stopper, your rhymes are improper
I'ma teach you like the master taught the grasshopper
Just getting warmer, I'm a transform a
Regular rhyme into a barnstormer
Try to jump I'll bump you chump, my job is thorough
Any MC, state city or borough'll get ragged
I drop like a sandbag
Serious as the mob, I don't play tag
Best of the batch, no man can catch up
Hoes can't be passed, a battle's a mis match
I flip lyrics, like a acrobat
And avoid combat like a diplomat
But when it's time for back lash, jacked or killed
It's a thrill to drill a run of the mill Bill
With my skill, I'm the lord of the rhymes
And I be writing at a rate that pace way past my bedtime
I rock the mic unlike
Some brothers I know, I guess they flow, pysch!
I'm dropping 'em

Yo, you're all in, stiff as a mannequin
I'm sharp as a pen and I'ma teach discipline
I get busy like it's two of me
Evidently, I'm hated by a few MC's
But so what? I just max like I'm playing the sax
And take the crowd to the climax
Yo, Cool J, I'll never go astray
I'm funky you can hear me at the Milky Way
You're weak, wick raps, I'm cool as jazz
Got razzmatazz ask my man Shabazz
I know you're afraid because I'm self-made
I invade, and blow up like a hand grenade
MC's are terror-struck, I'ma run amuck
'Cause your rhymes suck, you made a record on potluck
Just a toy boy, can't stop my convoy
Rhymes I said last year were just decoys
I'm like a fox, you annoy me like chicken pox
I'm back with a style that's unorthodox
You must of had a teaspoon full of bull
I'm like The Hulk, with more bulk, I'm powerful
They try to get with this, to me that's an insult
Boys shouldn't mess with an adult, that's too difficult
I enter like a giant saying fee fi foe fum
Then rock the auditorium until it's pandemonium
I'm dropping 'em

Don't sleep, 'cause I'ma go deeper
All you sleepers, I'm the Grim Reaper
My rhymes are rising, the angle's getting steeper
I hated Mussolini Martini so I'ma sweep a
Emcee, like he's one of the two
Break him into fragments right in front of you
Mic check one two, is too fundamental
My rhymes are monumental over an instrumental
In the center, I had to enter
Tormentor mentor experimenter and inventor
Of lyrics, so all you non-believers
It'll echo in your dreams at night when you receive a
Rude awakening, you can't do anything
You enter my kingdom and you cry as men bring
Gifts to the prince of excellence and magnificence
Alarm clock rings, you wake up, and you're convinced
That the crew invader, soloist exterminator
Greater evader of ducks, concert crusader
Is bad, my nickname's the circuit breaker
Eating up the world, acre by acre
I'm dropping 'em 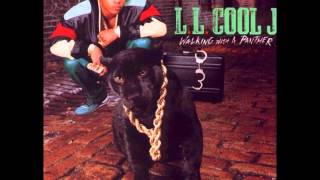 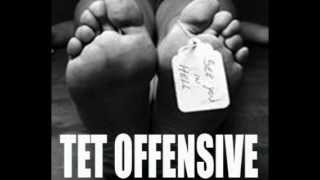 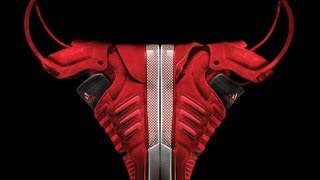 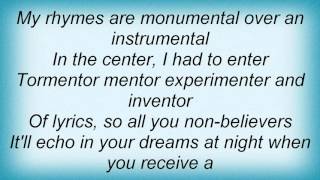 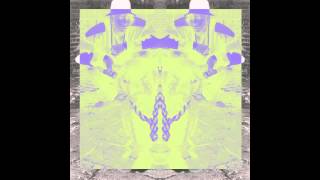 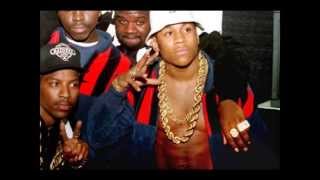