Close
Teddy Bunn
from Freeport, NY
January 1, 1909 - July 20, 1978 (age 69)
Biography
An overview of Teddy Bunn's recording activities during the 1930s reveals a skilled guitarist working shoulder to shoulder with many of the top jazz musicians of his generation, invariably bringing out the best in every participant, for as he himself frankly explained: "I have a very good ear and can usually sense what the cats are going to play a split second before they do it." Born in Freeport, Long Island, in 1909, Theodore Leroy Teddy Bunn grew up in a multi-instrumental family and gained his first professional experience accompanying a calypso singer. Bunn's recording debut took place on September 16, 1929. On that day he made records with Walter Fats Pichon and Henry Red Allen as well as Duke Ellington's Cotton Club Orchestra. A few weeks later Bunn recorded with the Six Jolly Jesters, a hybrid hokum ensemble combining some of Ellington's men with a kazooist and a washboard player.

Bunn's adventures as a session guitarist during the first months of the Great Depression brought him into contact with Harlem stride piano legends Fats Waller and James P. Johnson, New Orleans cornetist King Oliver, multi-instrumentalist Adrian Rollini, and blues singer Lizzie Miles. During the year 1930 he cut records with the Washboard Serenaders (including his feature Teddy's Blues); with vocalist and songwriter Spencer Williams and pianist Clarence Profit; with vaudeville clarinetist Wilton Crawley and pianist Jelly Roll Morton; with blues queen Victoria Spivey; and with the Alabama Washboard Stompers. In May and June of 1931 he made a series of records with the Washboard Rhythm Kings, a lively and entertaining ensemble that benefited greatly from his presence. Up to this point, Bunn was mainly a Victor recording artist who sometimes crossed over to Vocalion. Beginning in 1933 he recorded mainly for Decca, most famously as a cardinal member of the Spirits of Rhythm, initially known as Ben Bernie's Sepia Nephews. Leo Scat Watson was the main attraction in this little harmony vocal and string band; he found his perfect counterpart in Teddy Bunn.

In 1934 the Spirits backed vocalist Red McKenzie, former leader of the Mound City Blue Blowers. Bunn also recorded with two archetypal New Orleans clarinetists, first with Jimmie Noone in 1937, then in January 1938 with Johnny Dodds His Chicago Boys. Bunn's working itinerary for the rest of 1938 included sessions with Decca's designated Fats Waller impersonator Bob Howard; with electric organist Milt Herth; with boogie-woogie pioneer Cow Cow Davenport (who only sang while Sammy Price manned the piano); with Chicago blues singer Jimmie Gordon His Vip Vop Band; and with vocalists Ollie Shepard, Johnnie Temple, Trixie Smith, and Leola B. Wilson, professionally known as Coot Grant. This last assignment brought him into the combined orbits of reedmen Sidney Bechet and Mezz Mezzrow, who by the end of 1938 would involve him directly in the final recordings of trumpeter Tommy Ladnier, including a session with James P. Johnson His Hep Cats backing vocalist Rosetta Crawford. In March, April, and June 1939, Teddy Bunn was among the very first musicians ever to record for the Blue Note record label, first as a soloist, then as a member of the Port of Harlem Jazzmen and various offshoots of that ensemble fronted by trumpeter Frankie Newton, trombonist J.C. Higginbotham, and soprano saxophonist Sidney Bechet. Bunn recorded with a group calling itself the Ramblers and featuring electric organist Bob Hamilton, backed blues singer Georgia White, then moved to the West Coast and switched to electric guitar in 1940 for his debut as a member of the Lionel Hampton band.

Some of Teddy Bunn's most memorable moments on record occurred with the Hot Lips Page Trio at a Bluebird session in December 1940. Here he showed his best stuff both as a gutsy accompanist (on the lurid My Fightin' Gal) and as an inspired improviser (on the instrumental Do It If You Wanna). Bunn joined a reunited Spirits of Rhythm to back vocalist Ella Logan in 1941, led his own groups in California including the Waves of Rhythm in 1944, and sat in with Kansas City blues shouter Joe Turner in 1946. He worked with bandleader Edgar Hayes, gigged in Hawaii with tenor saxophonist Jack McVea, and collaborated with pianist Hadda Brooks. By the late '50s he was touring with a rock & roll road show and in 1959 he appeared with Louis Jordan's updated jump band. Deteriorating health curtailed his activity during the 1960s. After suffering several heart attacks and a stroke in 1970 that left him partially blind and crippled, Teddy Bunn settled in San Fernando, CA, and passed away at a hospital in Lancaster on July 20, 1978. ~ arwulf arwulf, Rovi 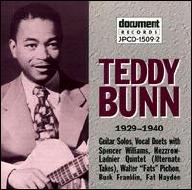 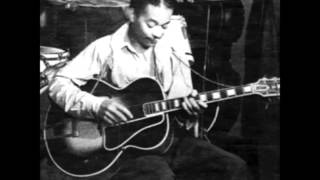 Teddy Bunn I'v Got The world On A String 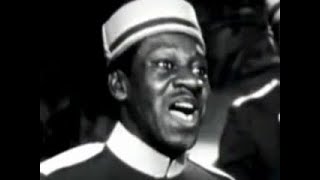 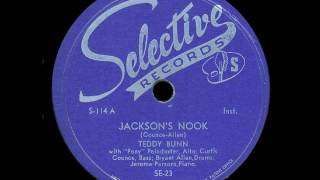 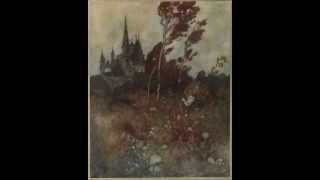 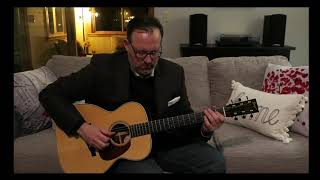 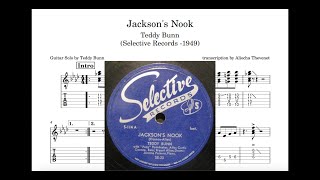