Close
Brad Paisley
from Glen Dale, WV
October 28, 1972 (age 48)
Biography
Arguably the preeminent male country artist to emerge in the 2000s, Brad Paisley cannily blended the past with the present, paying constant tribute to his forefathers -- when he reached the top of the charts, he still found space for Little Jimmy Dickens and George Jones in his videos -- but pushing the music forward into the new millennium, expanding its sonic and thematic possibilities. This sense of adventure could be heard on 2009's American Saturday Night, a big-hearted and eclectic record that won crossover acclaim, but by the time of its release, Paisley was already a country superstar and no stranger to the top of the charts. American Saturday Night was his fifth number one album on the Billboard country chart -- the streak started with his third album, 2003's Mud on the Tires; his first five albums all went platinum as well -- and he had 13 number one country singles, including such modern country staples as "I'm Gonna Miss Her (The Fishin' Song)," "Mud on the Tires," "The World," "She's Everything," "Ticks," "Online," "Letter to Me," and "I'm Still a Guy" -- a varied collection of songs that showcased his wry humor, hard-earned sentimentality, and prowess as a guitarist. As he entered into his second decade as a recording artist, the hits kept coming -- 2011's This Is Country Music and 2013's Wheelhouse both entered the Billboard 200 at number two -- as the onetime Young Turk slowly but surely started the transition into becoming an elder statesman himself.

Born in Glen Dale, West Virginia on October 28, 1972, Brad Paisley began playing guitar at the age of eight when his grandfather gave him a Silvertone Danelectro. Within two years, Paisley gave his first public performance at a local church, and around that time he started getting guitar lessons from Clarence Hank Goddard. The student and pupil joined forces with a couple of Goddard's pals to form Brad Paisley the C-Notes; around this time, the budding guitarist also began writing his own songs. His first real break arrived when his junior high school principal invited Paisley to play at the local Rotary Club, where Tom Miller, the program director of WWVA, one of the major country radio stations in the market, heard him. Miller extended an invitation to the young guitarist to play on the station's Saturday night show Jamboree USA, and his initial appearance was so well received he was asked to become a regular on the broadcast. Over the next eight years, Paisley appeared weekly on Jamboree USA, opening for such stars as Little Jimmy Dickens, Roy Clark, Ricky Skaggs, and the Judds. He stayed at Jamboree USA as he graduated high school and enrolled at West Liberty State College, where he spent two years before earning a full scholarship at Belmont University in Nashville. Relocating to the Music City in 1993, Paisley attended Belmont on a full ASCAP sponsorship. While at the university, he majored in music business and interned at ASCAP and Atlantic Records, making plenty of connections, including fellow songwriter Kelley Lovelace and Frank Rogers, who'd wind up producing several Paisley records.

Upon graduation, Paisley signed a songwriting deal with EMI Music and he began placing songs on records by hit acts, highlighted by David Kersh's "Another You," which went to number three on the country chart in 1997. This tune, along with others, led to a contract with Arista Records in 1998, and the label released his first single, "Who Needs Pictures," in February 1999. Four months later came a full-length debut filled with original compositions (all but one co-written). Also called Who Needs Pictures, the album took off that fall when the Lovelace co-written "He Didn't Have to Be" became Paisley's first number one hit. "Me Neither," the third single, went to 18 but its successor, "We Danced," topped the charts, starting a streak of Top Ten singles that ran uninterrupted until 2011. As he began recording his second album, Paisley worked with other artists -- notably, he collaborated with Chely Wright on her 2001 album Never Love You Enough; she also became his lover briefly -- while continuing to promote his debut, constant activity that paid off in Paisley being inducted into the Grand Ole Opry on February 17, 2001; at the age of 28, he was the youngest musician ever given the honor. Part II, his aptly named second album, came out May 29, 2001 and it confirmed his status as a rising country star. Debuting at three on the Billboard Country Albums chart, Part II spawned four Top Ten singles -- "Two People Fell in Love," "Wrapped Around," "I'm Gonna Miss Her (The Fishin' Song)," and "I Wish You'd Stay" -- with "I'm Gonna Miss Her" reaching number one.

Released in the summer of 2003, Mud on the Tires was Paisley's breakthrough, debuting at number one on the Billboard country chart and eight on the Top 200 and generating another four Top Ten singles: the cheeky novelty "Celebrity," "Little Moments," the mournful Alison Krauss duet "Whiskey Lullaby" (which went platinum), and "Mud on the Tires" (the latter going to number one). Mud on the Tires eventually went double platinum, as did its 2005 sequel, Time Well Wasted, whose four singles -- "Alcohol," the Dolly Parton duet "When I Get Where I'm Going," "The World," and "She's Everything" -- all went into the Top Ten, with all but the first reaching number one. With the sales came awards: Time Well Wasted won Best Album honors from both the Academy of Country Music and the Country Music Association in 2006, the same year Paisley earned four Grammy nominations. As the guitarist worked on his fifth studio album, he contributed two original songs to Pixar's summer 2006 film Cars and he released the seasonal Christmas in October 2006; it reached eight on the U.S. Billboard Country Albums chart. 5th Gear arrived in the summer of 2007 and it was an instant smash, debuting at three on the Top 200 (and number one on Billboard Country Albums) with its four singles -- "Ticks," "Online," "Letter to Me," and "I'm Still a Guy" -- all reaching number one. An expanded reissue of 5th Gear brought a fifth number one single called "Waitin' on a Woman" in 2008, which meant Paisley now held the record for most consecutive number one country hits in the SoundScan era. Also in 2008, Paisley won his first Grammy Award for "Throttleneck," which was named the Best Country Instrumental Performance; he would once again win that award in 2009 for "Cluster Puck" and he'd also take home Best Male Country Vocal performance that year for "Letter to Me."

Sitting comfortably at the top of the charts with plenty of accolades to his name, Paisley started to take some risks in 2008, beginning with the release of the almost all-instrumental Play. Buttressed with a couple of vocal performances, including the Keith Urban duet "Start a Band" that gave Paisley another number one single, Play debuted well -- number one on the country chart, nine on the Top 200 -- but not only was it his first album to not go platinum, it didn't go gold. That situation was rectified by his 2009 studio album American Saturday Night, a musically and thematically ambitious record that earned him his best reviews in the non-country press while giving him another big hit. The album debuted at number one on the country chart upon its June release (it came in at two on the Top 200) and it gave him another four big hits: "Then" and "Water," which both went to number one, and "Welcome to the Future" and "American Saturday Night," which both went to number two. For the 2010 holiday season, he released Hits Alive -- a double-disc package divided into one live set and one collection of hits -- and then returned with his seventh collection of new songs, This Is Country Music, in May 2011. "Old Alabama," the second single pulled from This Is Country Music, became Paisley's 19th number one single, followed quickly by his 20th number one, the Carrie Underwood duet "Remind Me," but there were signs of a chart slowdown when "Camouflage" became his first single in 11 years to not reach the Top Ten (it topped out at 15); similarly, This Is Country Music and American Saturday Night both stalled at gold where their predecessors had gone platinum.

As he toured This Is Country Music, Paisley also busied himself in a variety of show-biz cameos, including an appearance on the Cars 2 soundtrack and a guest spot on South Park. He also published a music-focused memoir called Diary of a Player, which was co-written by music journalist David Wild. After the tour came to a conclusion, he set out to work on his ninth album, Wheelhouse. An ambitious, genre-hopping album, the record was preceded by the "Southern Comfort Zone" single in the fall of 2012 and "Beat This Summer," which appeared a month prior to Wheelhouse's April 2013 release. Wheelhouse debuted well -- once again, he took the number one slot on Billboard's country chart and number two on the Top 200 -- but it soon got swallowed up in a media controversy concerning its album track "Accidental Racist." A duet with rapper LL Cool J, the song attempted to tackle the lasting legacy of racism but earned more attention for its clumsy lyrics from Paisley and LL Cool J. His next single, "I Can't Change the World," barely cracked the country Top 40 and its successor, "The Mona Lisa," did marginally better, peaking at 24; the album itself failed to go gold.

Within a year of the release of Wheelhouse, Paisley was back with a new single, "River Bank," which hit number 12 on the country chart. Its accompanying album, Moonshine in the Trunk, was solidly a country record, and featured duets with Carrie Underwood and Emmylou Harris. It became his eighth straight album to top the country chart, and reached number two on the pop chart. The album's second single, "Perfect Storm," made it to four, but the subsequent "Crushin' It" and "Country Nation" didn't crack the country Top Ten. In the summer of 2016, Paisley returned with "Without a Fight," a duet with Demi Lovato that was intended as a teaser for his 11th album. When Love and War appeared in April 2017, preceded by the Top Ten single "Today," "Without a Fight" wasn't on the record but duets with Mick Jagger and John Fogerty were. The album topped the country chart and peaked at 13 on the Billboard 200. In 2018, Paisley issued the single "Bucked Off" and joined a stacked roster of artists for King of the Road, a tribute to Roger Miller. The following year saw the release of the bluesy love song "My Miracle," with the rousing "No I In Beer" arriving in 2020. ~ Stephen Thomas Erlewine, Rovi 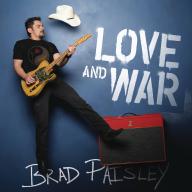 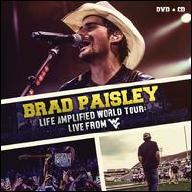 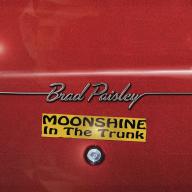 Moonshine in the Trunk
2015 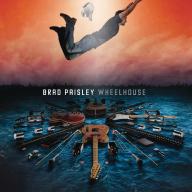 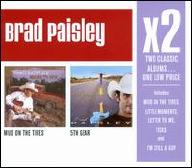 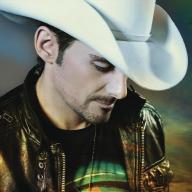 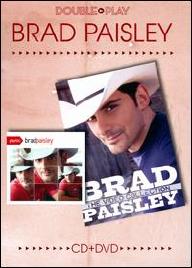 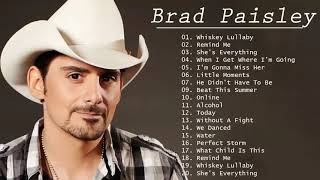 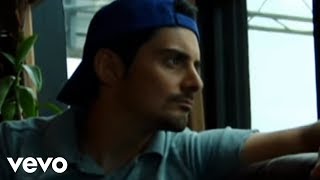 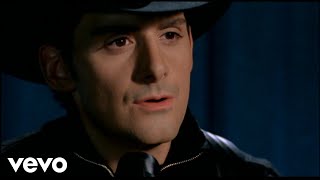 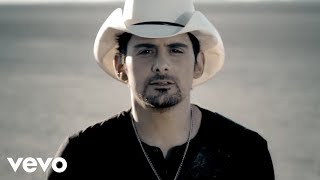 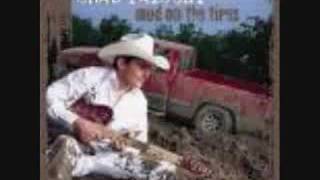 Brad Paisley- Mud On The Tires 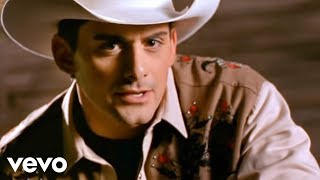 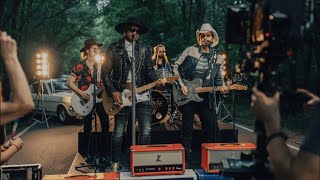