Close
Marvin Junior
from Harrell, AR
January 31, 1936 - May 29, 2013 (age 77)
Biography
As the lead singer of the Dells, Marvin Junior's warm, earnest baritone vocals helped define the Harvey, Illinois, R&B/soul music group during its '60s/'70s heyday (along with Johnny Carter's mesmerizing falsetto). One example of his vocal prowess is his ability at holding a note, as heard on the 1968 remake of their own "Stay in My Corner." It's no secret that producers Kenneth Gamble and Leon Huff wanted Marvin Junior on their Philadelphia International Records label. When the group signed to Chess, they went with the similar-sounding Teddy Pendergrass. Gamble Huff finally got to work with the Dells in 1992 on the I Salute You album. Junior, along with the rest of the Dells, was a key influence on Robert Townsend in the making of his movie The Five Heartbeats. In the early '50s, the group initially formed as the El Rays when the members were students at Thornton Township High School. The lineup was Marvin Junior, Johnny Funches, Verne Allison, Chuck Barksdale, Mickey McGill, and his brother Lucius.

After doing their share of street-corner harmonizing, the vocal group auditioned for Leonard Chess of Chess Records in nearby Chicago. Their first release on Chess' Checker imprint was the a cappella song "Darling I Know" with "Christine" on the flip side. The 45 was a small regional hit. Not long afterwards, Lucius McGill quit the group. Now a quintet, the group was taken under the wing of Harvey Fuqua of the Moonglows, who schooled the group on five-part vocal harmony. As the Dells, the group signed with pioneering R&B/pop/blues label Vee-Jay Records in 1955. Their first two singles for the label were "Tell the World" and "Dreams of Contentment." Their third single, "Oh What a Nite," a song written by Funches and Junior, went to number four R&B on Billboard's charts in late 1956. The record also included Vee-Jay's A&R director Calvin Carter singing bass in place of a departed Chuck Barksdale. Barksdale returned to the group after "Oh What a Nite"'s success. The follow-up singles were "Why Do You Have to Go" and "Pain in My Heart," both regional hits.

Then, in 1958, a car accident injured most of the group, leading to a two-year hiatus. In 1960, when the Dells re-formed, Johnny Funches didn't return. The tenor spot was given to Johnny Carter, a former member of the Flamingos ("I'll Be Home," "I Only Have Eyes for You"). Music director Curt Stewart got the group a gig backing Dinah Washington on a tour. The Dells sang background on four tracks from her Tears and Laughter album, released in 1959. Carter and Barksdale continued to tour with Washington, while former Danderliers singer Dallas Taylor sang lead on "Swingin' Tears," a 1961 Vee-Jay single. Reunited, the Dells cut a single, "Bossa Nova Bird," for Chess' Argo label; it was a regional hit. Back on Vee-Jay, the group released a Carter-produced album, It's Not Unusual, hoping to get a jump on the Tom Jones, version that was about to be issued in the U.S. After the group hit with the classic "Stay in My Corner" in summer 1965, Vee-Jay folded. The group returned to Chess Records in summer 1966 while they began working with producer Billy Davis and arranger Phil Wright. Two singles were released later that year, "Thinking About You" and "Run for Cover." In summer 1967, Chess assigned the Dells to their Cadet imprint. Staff producer Bobby Miller and arranger Charles Stepney picked the group to work with after a meeting with Leonard Chess. Their collaboration with Miller and Stepney yielded a hit single, "O-O, I Love You."

The next year, their career-making fast-selling album There Is was issued. In the fall of 1969, Leonard Chess, one of the group's biggest supporters, suffered a fatal heart attack. The following year, Bobby Miller left Chess for Motown and Charles Stepney took over the production duties for the Dells. The group recorded three LPs with Stepney before switching to Detroit producer Don Davis (Johnnie Taylor). Davis produced the group's only certified gold single, "Give Your Baby a Standing Ovation," which hit number three R&B in spring 1973. The Dells' final charting Cadet single was a long remake of "The Glory of Love," which hit number 59 R&B in spring 1975. In 1975, Chess folded and the Dells signed to Chicago-based Mercury Records, who released two albums by the group, 1975's We Got to Get Our Thing Together and 1976's No Way Back. The group signed with ABC Records in 1978 with their label debut, New Beginnings, produced by George Clinton, Al Perkins, Eli Fontaine, and the Dells. The group's other ABC album is Face to Face. By 1980, the Dells were signed to Chi-Sound Records, owned by producer Carl Davis (Jackie Wilson, the Chi-Lites, Gene Chandler). Davis had a distribution deal with 20th Century Records and the group charted two singles: the sweepingly romantic "I Touched a Dream" and "Passionate Breezes." In 1991, Davis produced an album by the group, The Second Time, for his Urgent label, which was distributed by Atlanta's Ichiban Records. It included an enchanting cover of Baby Washington's "That's How Heartaches Are Made."

While performing at the Wiltern Theater in Los Angeles, Kitty Sears introduced the Dells to actor/comedian/filmmaker Robert Townsend, a former Chicagoan from the city's west side. Townsend told them that he was interested in using the group for his research for an upcoming comedy about a black standup vocal group. Marvin Junior sternly informed him that there was nothing funny about the racism, harassment, and record label financial travails that real-life black standup vocal groups have to endure. Townsend changed the original "tons of yucks" concept for his film into something more poignant and historically correct. He traveled with the Dells for six weeks. The classic The Five Heartbeats was released by 20th Century Fox in the spring of 1991. The Dells were included on the movie's Virgin Records soundtrack, with their "A Heart Is a House for Love" going to number 13 R&B in early 1991, giving the group their first Top 20 R&B single in 11 years and a much-needed boost. The B-side of the single was the 1968 version of "Stay in My Corner."

Beset with record offers, the Dells signed with Gamble Huff's Philadelphia International Records through Zoo/BMG, and the album I Salute You was issued around the time of the group's 40th anniversary. The charting singles were "Come and Get It" and the glorious ballad "Oh My Love" at number 81 R&B. The chart positions of these singles, particularly "Oh My Love," probably reflected the dominance of hip-hop-oriented acts on the radio and the lack of adequate promotion. The group recorded for former Stax executive Al Bell's Bellmark Records in the late '90s while staying active on the touring circuit. Lead singer Junior's son, Marvin Junior Jr., was a chip off the old block, making a name for himself performing around the Chicago area. When Marvin Junior died at age 77 on May 29, 2013 at his home in Harvey, Illinois, it was Marvin Jr. who confirmed that his father's cause of death was kidney and heart problems. ~ Ed Hogan, Rovi 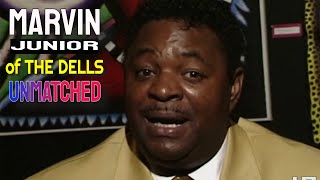 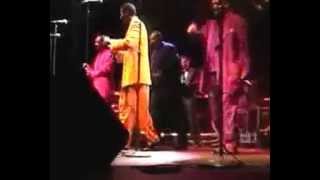 MARVIN JUNIOR...OF "THE ORIGINAL DELLS," PAST AWAY TODAY 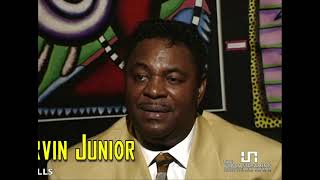 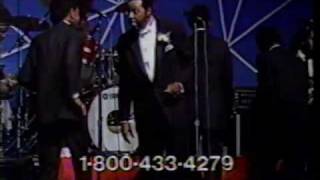 The Dells - The Love We Had / Oh What A Night 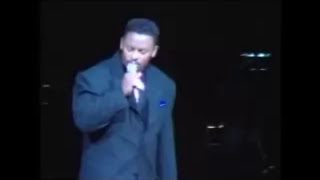 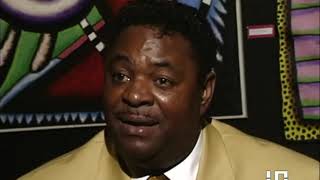 Marvin Junior of The Dells on Rhythm & Blues
Available here: