Close
Emerson, Lake & Palmer
from London, England
formed January 1, 1970 (age 51)
Biography
Emerson, Lake Palmer were progressive rock's first supergroup. Greeted by the rock press and the public as something akin to conquering heroes, they succeeded in broadening the audience for progressive rock from hundreds of thousands into tens of millions of listeners. They created a major radio phenomenon as well, penning classic rock radio staples like "Lucky Man," Still…You Turn Me On," and "Karn Evil 9 1st Impression, Pt. 2," and issuing hugely influential albums like Tarkus and Brain Salad Surgery. Their flamboyance on record and in the studio echoed the best work of the heavy metal bands of the era, proving that classical rockers could compete for that arena-scale audience. Over and above their own commercial success, the trio also paved the way for contemporaries such as Jethro Tull and Yes, the latter of whom would become their chief rivals for much of the 1970s. ELP disbanded in 1979 but reformed in 1991 and issued two more studio albums, Black Moon (1992) and In the Hot Seat (1994), before ceasing operations once again. In 2010 they performed their final show at the High Voltage Festival in London to commemorate their 40h anniversary. Keyboardist Keith Emerson and bassist/guitarist/vocalist Greg Lake passed away in 2016, leaving drummer Carl Palmer as the sole remaining member.

Keyboardist Keith Emerson planted the seeds of the group in late 1969 when his band the Nice shared a bill at the Fillmore West with King Crimson, and the two first spoke of the possibility of working together. After the Crimson lineup began disintegrating during their first U.S. tour, Lake opted to leave the group. Upon officially teaming in 1970, Emerson and Lake auditioned several drummers before they approached Carl Palmer, not yet 20 years old and already an overpowering talent, as well as a former member of the Crazy World of Arthur Brown and Atomic Rooster.

The trio's first rehearsals mostly picked up from the Nice's and King Crimson's respective repertoires, including such well-known numbers as "Rondo" and "21st Century Schizoid Man." In August of 1970, ELP played their first show at the Plymouth Guildhall, just ahead of the Isle of Wight Festival in August of 1970, where they astonished more than half-a-million onlookers with their sound and instrumental prowess. One month later, the group finished their debut album, Emerson, Lake Palmer, comprised of their strongest early originals and two dazzling classical adaptations filled with rippling piano and synthesizer playing by Emerson along lightning-fast drumming by Palmer, anchored around Lake's bass work. That album was an instant success, rising to the Top Five in England and the Top 20 in America with considerable help from a last-minute addition -- pressed to fill out the running time of the album, the group settled on a composition that Lake had written as a boy, called "Lucky Man." The latter became their debut single and made the Top 50 in America.

The trio's stage act rapidly became the stuff of legend, Emerson's organ pyrotechnics -- which dated from his days with the Nice -- getting him compared to Jimi Hendrix. The recording of the second ELP album, Tarkus (1971), tested their cohesiveness while stretching their sound in new directions and dimensions, with a much more complex electronic keyboard sound and a running time on the title track that took up the entire first side. But "Tarkus" the composition, despite its difficult birth (at first, Lake didn't resonate very well to the musical textures or time signature that Emerson and Palmer had begun with), ultimately defined the ELP sound as most people understood it: loud and bombastic, somewhat gloomy in its lyrical tone, and boundlessly exultant in its instrumental power. The Tarkus album reached number one in England and the Top Ten in America, and it seemed at this point as though the trio could do little wrong -- after a couple of abortive attempts, they captured a new feature of their concerts, a rock adaptation of Mussorgsky's Pictures at an Exhibition, at a March 21, 1971, concert at Newcastle City Hall, and it, in turn, became another major hit. Indeed, as a result of the release of that album, several million teenagers of high-school age suddenly had Mussorgsky's name and music -- after a fashion -- in their consciousness, to the delight or chagrin of music educators (depending on their outlook) everywhere.

It was eight months before ELP's next record, Trilogy, was released in July of 1972. In the interim, they toured extensively, and made it their business to cultivate the college audience that took most naturally to their work. Lake never sang better, nor did the group ever sound more comfortable and laid-back on that album, and among the eight very solid numbers in a classical-rock vein, there was tucked a track that became virtually the band's signature tune, a version of Aaron Copland's "Hoedown." The group also enjoyed its most successful pop single off of that album in the Lake-authored ballad "From the Beginning."

Such was the group's credibility that when it came time to record a version of the first movement of Alberto Ginastera's "Piano Concerto No. 1" and the publisher denied them permission, they approached the composer himself, who fully approved of the track that became "Tocatta" on Brain Salad Surgery, released in 1973.

The most popular album in their history, Brain Salad Surgery dominated the charts and the airwaves upon its release -- it was also their boldest group effort, offering the "Karn Evil 9" epic that filled more than the side of an LP, as well as the best playing and production in their history, and some of the most elaborate packaging of the fairly daunting progressive rock boom. By this time, the band had formed its own label, Manticore Records (named for one of the mythological creatures portrayed in "Tarkus"). Through Manticore, ELP also released material by ex-King Crimson lyricist Pete Sinfield and the Italian progressive rock band PFM; Sinfield's presence as a composer with Lake on Brain Salad Surgery also helped strengthen one of the group's lingering weaknesses, its lyrics -- where Lake's use of language had always tended toward the pleasant but simplistic, Sinfield, a veteran of King Crimson, provided lyrical complexity nearly as daunting as the best of the group's music.

In the wake of this string of successes, ELP released a triple-live album, Welcome Back My Friends to the Show That Never Ends, in August of 1974, which was their last new release for over three years. It was also at this point that the bandmembers began chafing at the restrictions that the trio put on their individual ambitions -- Emerson's boldest compositions were pure classical music, requiring orchestral accompaniment; Lake's songs didn't necessarily have much for Emerson or Palmer to contribute; similarly, Palmer's music was going in directions that would have left the others as little more than sidemen. A trio of solo albums would have been the answer, but they'd also seen how solo releases by members of such top acts as Yes and the Moody Blues had failed to sell in numbers resembling those of their respective groups.

The result was Works, Vol. 1, a double-LP that was essentially three one-sided solo albums by each member and a fourth group side. Released in March of 1977, the record fared relatively poorly, both commercially and critically. Additionally, following the release, the group was never the same -- Works destroyed ELP's unity, and their remaining motivation for recording seemed only to be their contractual obligations. Worse still, they had squandered valuable time over the hiatus between Brain Salad Surgery and Works, during which the public's taste was changing -- by 1977, the notion of extended suites, conceptual rock albums, and classical-rock fusion that were trademarks of ELP's sound seemed hopelessly ponderous and pretentious, as the rise of punk rock and disco combined to undermine any notion of intellectualism in rock. Works, Vol. 2, released in November of 1977, was nothing more than a collection of obscure B-sides and odd tracks dating back four years -- though it received more positive reviews in some quarters than did its more ambitious predecessor.

Their next album of new material, Love Beach, was later described by the bandmembers themselves as nothing more than a matter of going through the motions. ELP split up in 1979, with Lake embarking on a moderately successful solo career, while Emerson took to composing film scores and recorded the occasional solo project, and Palmer, after a stint with the band Carl Palmer's PM, joined the pop supergroup Asia. In the mid-'80s, Emerson and Lake got together with drummer Cozy Powell as the short-lived Emerson, Lake Powell, complete with a self-titled 1985 album and a tour.

In 1991, Emerson, Lake Palmer reunited for the Black Moon album, followed by a tour, which led to the release of Live at the Royal Albert Hall and another studio album, 1994's In the Hot Seat. The trio mounted several additional international reunion tours during the mid- to late '90s, although disputes over an intended new album short-circuited their planned late-decade recording comeback. Emerson re-formed the Nice for a reunion tour and live album early in the new century, and later collaborated with Mike Bennett in the making of a triple-disc set entitled Reworks: Brain Salad Perjury, exploring new permutations of ELP's sound. He and Palmer each toured with their respective bands, with Palmer later rejoining Asia for a 25th anniversary tour, while Greg Lake toured with Ringo Starr in 2001, and subsequently formed his own band. Lake and Emerson scheduled a tour of the United States and Canada performing in an acoustic format in 2010, and the trio planned to reunite for a single 40th anniversary performance in July of 2010, presented as part of Classic Rock magazine's High Voltage Festival at Victoria Park in London. Sadly, Keith Emerson died in March 2016 at the age of 71. In a fitting memorial to the late, great keyboard virtuoso, a number of reissues arrived later that year, as well as Anthology, an exclusive three-disc collection of tracks that spanned the band's career from 1970 to 1998. Nine months after Emerson's death, Greg Lake died in December 2016 at the age of 69. ~ Bruce Eder, Rovi 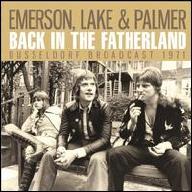 Back in the Fatherland
2019 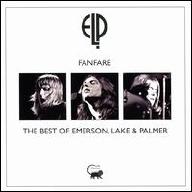 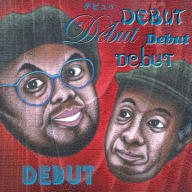 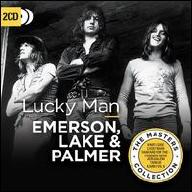 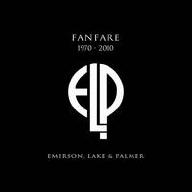 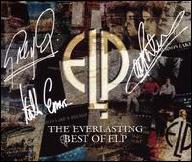 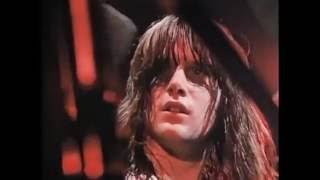 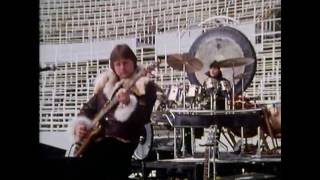 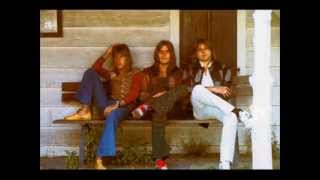 FROM THE BEGINNING - Emerson, Lake & Palmer (ELP) (With Lyrics on screen) 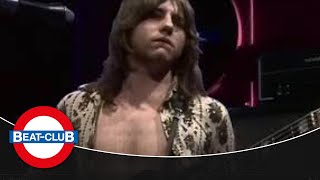 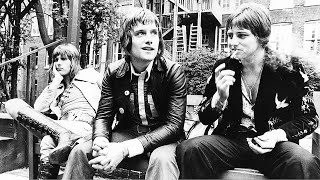 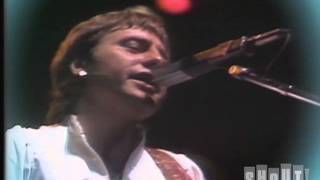 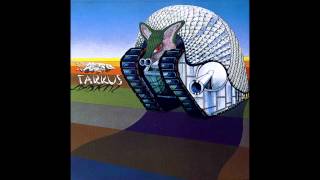