Close
Mose Allison
from Tippo, MS
November 11, 1927 - November 15, 2016 (age 89)
Biography
One of the greatest songwriters of the 20th century, pianist and singer/songwriter Mose Allison (aka "The Sage of Tippo") suffered from a "categorization problem" throughout his career. Although his boogie woogie-cum-bebop playing style was fresh and innovative (and got better as he aged), he excelled as a composer of highly original blues and jazz tunes. His hip, poetic, funny, ironic, and sometimes tender songs have been recorded by the Who ("Young Man Blues"), Leon Russell ("I'm Smashed"), Bonnie Raitt ("Everybody's Cryin' Mercy"), and dozens more. He began recording with Prestige on 1957's dazzling Back Country Suite and 1958's Local Color. On Atlantic during the 1960s, albums such as I Don't Worry About a Thing, Wild Man on the Loose, and I've Been Doin' Some Thinkin' won wide attention from critics and college kids. Allison's diversity confused booking agents, who would often overlook him because he didn't fit into an easily definable category. Allison became a road dog, playing up to 200 shows a year in venues ranging from tiny clubs to theaters. Between 1982 and 2001, Allison recorded sporadically for Blue Note, issuing fine albums such as 1982's Middle Class White Boy, 1996's Gimcracks and Gewgaws, and 2001's two-volume The Mose Chronicles: Live in London. His final studio outing, The Way of the World, appeared in 2010 on Anti. In 2021, the U.K.'s Strawberry label released the six-disc Complete Atlantic/Elektra Albums 1962-1983.

Born on his grandfather's farm in Tippo, Mississippi in 1927, he discovered he could play the piano by ear at age five and began figuring out blues and boogie woogie tunes he heard on the local jukebox. In high school he listened to the music of Louis Armstrong, Fats Waller, Duke Ellington, Louis Jordan, and Nat King Cole. He played trumpet in marching and dance bands and began writing his own songs. He had easy access to a radio and thus the music of Pete Johnson, Albert Ammons, and Meade Lux Lewis. Allison also credited "the Poet Laureate of the Blues," songwriter Percy Mayfield, as a major inspiration on his composing.

After a year at Ole Miss, he joined the Army in l946. Allison played in the Army Band in Colorado Springs and performed with small groups at NCO and Officer's clubs. Returning to university, he joined the dance band as arranger, pianist, and trumpeter, then left to form his own trio. He met his future wife Audre in 1949 (they were together until his death 65 years later) and started a family. He began working the road with a trio. After a year of traveling, Allison married and finished college at Louisiana State University in 1952 with a B.A. in English and Philosophy. After graduating, he returned to the road.

Allison worked nightclubs across the Southeast and West, blending the influences of the raw Delta blues of his childhood with the modern jazz piano innovations of John Lewis, Thelonious Monk, and Al Haig. His vocal style was influenced by Mayfield and jazz-blues singer Charles Brown.

He arrived in New York in 1956, where he received encouragement, work, and even a recording date as a sideman for saxophonist Al Cohn. In 1957 he secured his own recording contract with Prestige Records. His debut outing, Back Country Suite in 1958, was a collection of self-composed, largely instrumental pieces evoking his impressions of the Mississippi Delta and a handful of jazz standards; it was released to unanimous critical acclaim and has since become a classic, largely due to the appearance of the song "Back Country Suite: Blues," eventually known as "Young Man Blues." In addition to leading his own trio, Allison worked live and in the studio with jazz greats Stan Getz, Zoot Sims, and Gerry Mulligan.

Allison released three albums in 1958, Young Man Mose, Creek Bank, and Local Color (the last was comprised, almost exclusively, of his own songs, including the now-standard "Parchman Farm"). After releasing 1959's Autumn Songs he left the label to sign with Columbia, where he released Transfiguration of Hiram Brown in 1959, which featured an eight-part vocal and instrumental suite combining Delta blues and dazzling hard bop originals over a handful of standards. 1960's I Love the Life I Live featured him leading three rhythm sections, including one with bassist Henry Grimes and drummer Paul Motian. His final album for Columbia appeared on its Epic imprint: 1961's Takes to the Hills included new compositions as well as unissued material from his previous two outings.

In mid-1961, Allison was invited to a meeting with Nesuhi Ertegun of Atlantic Records; after just ten minutes, he signed a recording contract. His label debut, 1962's I Don't Worry About a Thing, featured him leading a trio with longtime bassist Addison Farmer and drummer Osie Johnson. The set's first three songs -- the title number, "It Didn't Turn Out That Way," and especially "Your Mind Is on Vacation" became some of his most covered tunes. His relationship with Ertegun was one Allison prized; he felt as if he had encountered a record business executive who got what he was trying to do. For his second album on Atlantic, Swingin' Machine, he led a quintet that included tenor saxophonist Jim Reider and trombonist Jimmy Knepper, with Frankie Dunlop replacing Johnson. A steady string of well-received trio outings arrived over the next few years including 1964's The Word from Mose 1965's Wild Man on the Loose and Mose Alive!, and 1968's I've Been Doin' Some Thinkin', his first-self-produced outing. The latter set contained the Allison classics "Your Molecular Structure" and "Everybody's Crying Mercy," tempered by his beautiful, nearly iconic rendition of Jimmie Davis' "You Are My Sunshine." In 1970 he released Hello There, Universe, an ambitious outing produced by Joel Dorn that featured expanded arrangements and personnel for tunes including the title cut, "Monsters of the Id, "Wild Man on the Loose," and "I'm Smashed." Some of his sidemen on the date included saxophonists Joe Henderson, Joe Farrell, Pepper Adams, and Seldon Powell.

Allison spent much of his tenure at Atlantic supervised and produced personally by Ertegun, whom he considered a good friend. After the company saw substantial growth during the 1960s due to its many R&B and rock successes, Ertegun's attention was diverted from their direct working relationship. Allison took it in stride for a time, working with Dorn on 1971's stellar Western Man (his first to employ a Fender Rhodes piano on some selections) leading a rhythm section that included electric bassist Chuck Rainey and soon-to-be Mahavishnu Orchestra drummer Billy Cobham. Allison self-produced the widely acclaimed 1972 live outing Mose in Your Ear. Already discouraged due to the demise of his working partnership with Ertegun, he toured almost constantly from 1973 to 1975. His last album for the label was 1976's Your Mind Is on Vacation. It included re-recordings of many of his best-known tunes with a top-shelf cast of players that included drummer Jerry Granelli and bassist Jack Hannah, saxophonists Al Cohn, Joe Farrell, and David Sanborn.

Allison began spending more time on the road playing in Europe and Japan. Overseas he was a main-stage festival staple and could headline larger clubs. Without a label, he didn't record for another six years.

He signed with Bruce Lundvall's Elektra Musician subsidiary in 1982, and issued Middle Class White Boy, for which he received a Grammy nomination for Best Jazz Vocal Performance, Male. Produced by Esmond Edwards, the 11-cut set featured Allison leading a quintet that included Farrell and guitarist Phil Upchurch in a program of stellar new originals including the title track and "How Does It Feel (To Be Good Looking)," as well as blues and jazz standards. While it drew mixed reviews in the States, it charted overseas. He followed a year later with Lessons in Living, cut at the Montreux Jazz Festival with a band that included saxophonist Lou Donaldson, bassist Jack Bruce, guitarist Eric Gale, and Cobham on drums.

Allison signed with Blue Note for 1987's Ever Since the World Ended. The first of several albums produced by Ben Sidran, the lineup that selectively included alto saxophonist Arthur Blythe and guitarist Kenny Burrell, eight of its 12 tracks were originals. It peaked at number three on the jazz albums chart and earned Allison another Grammy nomination for Best Jazz Vocal Performance, Male. While at Blue Note, Allison cut some of the most creative material in his career. This was in large part due to his partnership with Sidran. 1990's My Backyard included some of his best later songs -- "Ever Since I Stole the Blues," and "Stranger in My Home Town" -- and the New Orleans second-line R&B-inspired "Big Brother." For 1994's The Earth Wants You, Sidran and Allison hired a stellar cast of sidemen. In addition to a reunion with drummer Paul Motian, the players included saxophonists Joe Lovano (playing alto) and Bob Malach, guitarist John Scofield, trumpeter Randy Brecker, and conguero Ray Mantilla. Also in 1994, Rhino Records released the box set Allison Wonderland, an anthology that focused on his Atlantic sides.

In 1996, Van Morrison released Tell Me Something: The Songs of Mose Allison co-billed to collaborators Georgie Fame, Sidran, and Allison himself, who appeared on piano and in vocal duets with Morrison on the tracks "I Don't Want Much" and "Perfect Moment." All of its performances were cut live in one or two takes. The album peaked at the top of the jazz albums charts. His final studio date for the label was 1998's Gimcracks and Gewgaws. Produced by Sidran, the acclaimed 14-track collection offered fine new originals including the ballad "Texana," "What Will It Take (To Put You in the Casket), and "Cruise Control," performed by a lineup that included Motian, guitarist Russell Malone, bassist Ratzo Harris, and saxophonist Mark Shim.

In 2001, Blue Note released two volumes of The Mose Chronicles: Live in London. These high-energy outings featuring a rhythm section with bassist Roy Babbington and drummer Mark Taylor (the second added guitarist Jim Mullen) offered truly dazzling piano work from Allison, who had developed his signature bop, blues, and swing style while incorporating influences from 20th century classical composers such as Bartok and Stravinsky. That said, he made it all groove. Both albums won Grammy nods for Best Jazz Vocal Album. In 2005, the BBC presented director Paul Bernays' acclaimed documentary Mose Allison: Ever Since I Stole the Blues. In 2008, Louisiana State University bestowed Allison with an Honorary Doctorate of Humane Letters.

Producer Joe Henry coaxed Allison back into the studio to record The Way of the World for Anti. It was his first studio album in a dozen years, and proved to be his last. The set reached number three on the jazz albums chart and was followed by a tour. Allison retired from performing in 2012, and in 2013 was granted the distinction of NEA Jazz Master. He died at his home on Hilton Head Island, England's Strawberry label issued the deluxe six-disc box set Complete Atlantic/Elektra Albums 1962-1983; it contained all 12 albums he released on those labels. ~ Thom Jurek & Richard Skelly, Rovi 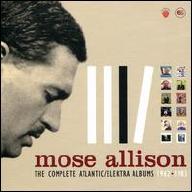 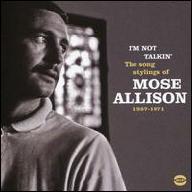 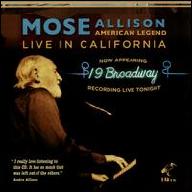 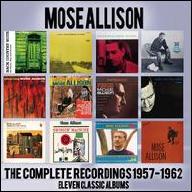 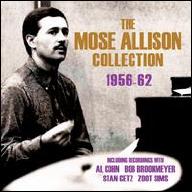 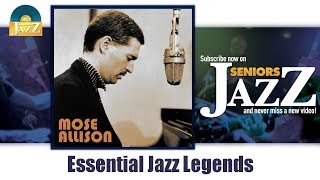 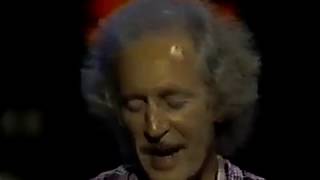 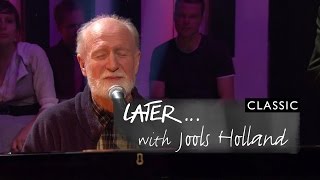 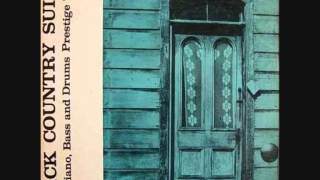 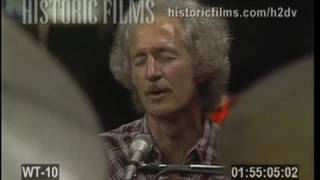 MOSE ALLISON "YOUR MIND IS ON VACATION" 1975 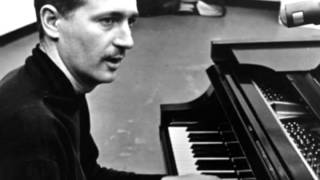 Mose Allison - I Ain't Got Nothing But The Blues 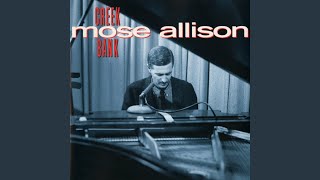