Close
Chico Freeman
from Chicago, IL
July 17, 1949 (age 71)
Biography
Chico Freeman is a composer, bandleader, educator, and multi-reedist from Chicago. The scion of the late saxophonist Von Freeman, he has issued dozens of recordings as a leader, and played on hundreds more. While a member of Elvin Jones' group, he issued his debut album, Morning Prayer, for Japan's WhyNot label, and then signed to India Navigation for 1977's Chico, the first of a handful of now-classic albums for the label. Freeman's tenor tone is gritty and exuberant, yet intimate and resonant, capable of anguished cries and tender affirmations inside a moment. His music has been informed by the Chicago blues he played in clubs as a teen, bop and hard bop played by his dad, and bandleaders he served -- including Charles Mingus and Dizzy Gillespie -- John Coltrane's modal inventions, and the AACM's free excursions. Further, he learned about the interplay of Afro-Latin rhythms from Latin bandleaders he worked for including Tito Puente, Eddie Palmieri, Ray Barretto, Chucho Valdes, and Celia Cruz, to name scant few. Freeman's seminal Tradition in Transition was issued in 1982, after he played a major role in the famed Central Park Young Lions concert and film. He later played R&B with Michael Jackson and Earth, Wind Fire, among others, and founded the Leaders, a jazz group of top-flight jazz composers and soloists. In 1990, he co-founded Roots with Nathan Davis, Sam Rivers, and Blythe, and played with smooth jazz, world fusion collective Brainstorm. In 1996, he issued the influential The Emissary, a post-bop world jazz outing. Freeman released a series of acclaimed albums during the 21st century including 2002's Out of Many Comes the One, 2012's Elvin, and 2015's Spoken Into Existence.

Freeman was born Earl Lavon Freeman, Jr., and nicknamed "Chico" by his dad. He started playing piano at age five, and began playing trumpet at ten, inspired by seeing his father sit in with the Miles Davis Quintet in Chicago. Though he was exposed to jazz early on, many of Freeman's early professional gigs were in Chicago clubs as a teen with blues artists including Memphis Slim and Lucky Carmichael. He switched to tenor sax while at Northwestern University, where he studied math, advanced composition, and theory. While studying for his master's in composition and theory at Governor State University with Muhal Richard Abrams, Freeman taught at the Association for the Advancement of Creative Musicians' (AACM) music school. He also played and studied with Fred Anderson, Adegoke Steve Colson, and his uncle, jazz-funk guitarist George Freeman. As a graduate student, he was the principal soloist in the university's big band and toured Brazil with them during the '70s. He won awards at the Notre Dame Jazz Festival in 1973.

After completing his master's, Freeman moved to New York, where he found work with Elvin Jones, Sun Ra, Sam Rivers, Jack DeJohnette, and Don Pullen. He began leading his own bands during the mid- to late '70s. Freeman released his debut, Morning Prayer, for Japan's WhyNot in 1976, and a year later signed a multi-album, non-exclusive deal with the independent India Navigation. Chico appeared in 1977 with a band that included pianist Abrams, drummer Steve McCall, and bassist Cecil McBee. Freeman also recorded for Les Koenig's Contemporary label during the period, issuing Beyond the Rain in 1978. This early period was prolific. Between 1977 and 1982, the two labels issued half a dozen albums of remarkable and lasting consistency and innovation: India Navigation released Kings of Mali, Spirit Sensitive, and The Outside Within, while Contemporary put forth Peaceful Heart, Gentle Spirit, and Destiny's Dance. Freeman also managed to issue his Black Saint leader debut, No Time Left, and Freeman Freeman with his dad.

The year 1982 proved seminal in the saxophonist's career. He was part of the then-controversial Columbia album Fathers Sons; he and Von were showcased on one side while Ellis and Wynton Marsalis led the other. Freeman played a major role in the filming of the Young Lions event that year in Central Park, showcasing the talents of rising jazz stars that included Bobby McFerrin, Marsalis, Paquito D'Rivera, Kevin Eubanks, and Anthony Davis at the dawn of the "new traditionalists" era. Freeman, always influenced by jazz history, reflected it and his new discoveries on the acclaimed Tradition in Transition for Elektra Musician and The Search, his final outing for India Navigation.

Freeman's relationship with Elektra continued on Tangents, featuring McFerrin, in 1984. When superstar bands were being organized by promoters in Europe, Freeman founded the Leaders, an all-star sextet of internationally recognized bandleaders. The original lineup included Cecil McBee, Kirk Lightsey, Lester Bowie, Arthur Blythe, and Famoudou Don Moye; they set the standard for eclectic and innovative music from a band comprised entirely of composers. The group issued Mudfoot for Blackhawk in 1986, the same year Freeman released The Pied Piper for the label, a quartet outing with former boss Jones, McBee, and pianist Kenny Kirkland. He followed a year later with Tales of Ellington, cut in several sessions with a variety of top-shelf musicians including Jones, McBee, Herbie Lewis, Larry Willis, Cables, and John Purcell. In 1988, the Leaders issued Out Here Like This... on Black Saint, and followed with Unforseen Blessings a year later, while Freeman cut Lord Riff and Me for WhyNot; the latter remained unreleased until 2010.

In 1989, Freeman entered a new phase in his career. He released You'll Know When You Get There with Von on Black Saint, and formed the electric band Brainstorm consisting of himself, vocalist/keyboardist Delmar Brown, percussionist Norman Hedman, drummer Archie Walker, and bassist Chris Walker. He produced their debut album, The Mystical Dreamer, recorded in Paris for In+Out. It drew positive reviews in Europe for its mix of Afro-Latin rhythms and harmonies, funk and hip-hop energy, post-bop tradition, and technological polish. American critics simply didn't get it. Undaunted, Brainstorm released the live Sweet Explosion in 1990, with a new rhythm section including drummer Tommy Campbell and bassist Alex Blake. That same year, Freeman contributed to Kip Hanrahan's Tenderness as part of an astonishing lineup. 1991 saw Freeman play sideman to British pop singer Mari Wilson on The Rhythm Romance, and vibraphonist Jay Hoggard on Days Like These. He also co-led and produced Luminous with Blythe.

The Leaders resumed recording in 1994 with Slipping and Sliding for Italy's Soundhill Records and continued to tour the globe. The Chico Freeman Quintet with Arthur Blythe released a pair of critically lauded albums over the next two years: The Unspoken Word for Ronnie Scott's Jazz House label and Focus for Contemporary, while Roots released Saying Something on In+Out. Freeman issued The Emissary in 1996, an electro-acoustic outing that crossed post-bop, African, and Latin sounds. European critics flipped for its seamless meld of sounds and rhythms. For the remainder of the decade, Freeman worked as a sideman in the studio and on-stage. He played on dates by Carmen Lundy and Blythe, in Sam Rivers' Rivbea All-Star Orchestra, with DeJohnette on Festival, and released Von Freeman's 75th Birthday Celebration: Live at The Blue Note, featuring his father as guest soloist.

From the beginning of the new century, Freeman was a resident of the European Union, though he visited the States often to tour. His first date as a leader in the 21st was Oh, By the Way by Chico Freeman y Guataca, a Latin jazz ensemble he assembled with old friend Hilton Ruiz on piano. In 2003, Freeman returned the favor; he played on the pianist's acclaimed Enchantment, while the other tenor player on the session was Joe Henderson. A new incarnation of the Leaders released the widely acclaimed Spirits Alike for Double Moon Records in 2006. It featured trumpeter Eddie Henderson replacing the deceased Bowie, drummer Billy Hart, alto saxophonist Bobby Watson, and pianist Fred Harris; only McBee and Freeman remained from the original lineup. That year also saw the release of Out of Many Comes the One, with the saxophonist leading a post-bop-cum-world-jazz quintet that featured Russian pianist Misha Tsiganov.

Freeman spent the next several years wandering Europe and teaching. In 2010, Candid finally released Lord Riff and Me after 21 years in the vault. Originally recorded for WhyNot in 1989, it included Von and Chico on the front line with Hart, McBee, and Cables. Its issue was celebrated throughout the world's jazz community. That same year, David Murray Chico Freeman with Ozay appeared from ITM. The Turkish vocalist was backed by the two saxophonists, drummer Pheeroan Ak Laff, Lightsey and D.D. Jackson on piano, Calvin Jones on bass, and Billy Bang on violin. In 2012, Elvin: The Elvin Jones Project appeared, upon which Freeman was joined by an A-list American rhythm section of Cables on piano, bassist Lonnie Plaxico, and Winard Harper on drums, with tenorist Joe Lovano guesting on two tracks.

In 2015, the saxophonist worked with the Austrian Jive Music label to release the widely acclaimed Spoken Into Existence, by the Chico Freeman 4-Tet. Produced by the saxophonist, the lineup included bassist Heiri Känzig, with whom Freeman formed a creative partnership; a few months later, the pair issued The Arrival, a duo offering on Switzerland's Intakt Records. Freeman and his uncle George Freeman collaborated on the acclaimed All in the Family for the Chicago-based Southport Records label with Hamid Drake, bassist Harrison Bankhead, and guitarist Mike Allemana.

In March 2020, Freeman caught the last flight out of Moscow before the borders closed due to COVID-19; however, he had no way of traveling to the U.S. Locked down in Europe and self-quarantined, he watched the pandemic's effects unfold across the globe. Desiring to contribute in some way, he reached out to his online musical family to do something to help heal and inspire. Freeman chose the Bill Withers' song "You Just Can't Smile It Away." He enlisted Texas gospel singer Yatron in Texas, keyboardist Jeremy Mage in Switzerland, and synthesist Jan Pulsford in London. After cutting the track, Merlyn Bruce mixed it at London's Mothership Studios for release by Efficacy Recordings. The label and Freeman designated all proceeds from the track be donated to the charity Chicago HOPES for Kids. ~ Thom Jurek, Rovi 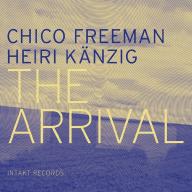 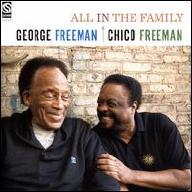 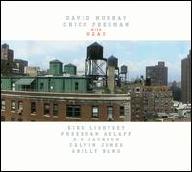 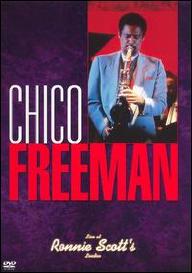 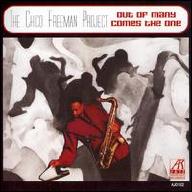 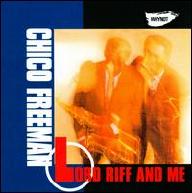 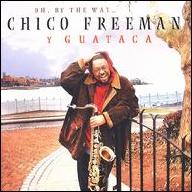 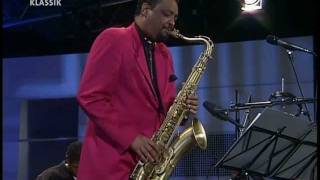 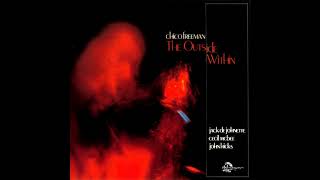 Chico Freeman ‎– The Outside Within [Full Album] 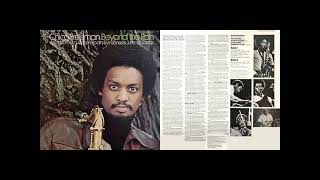 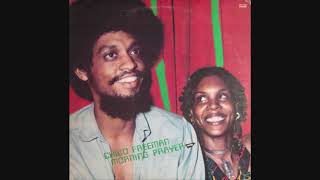 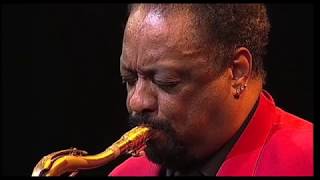 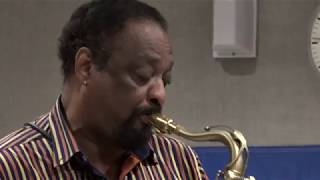 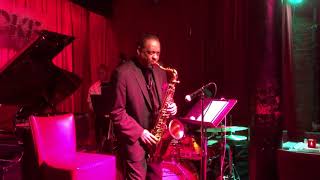